Set to kick off on April 11, NJSCOOP 2020 features 96 total tournaments—the most ever in a series for PokerStars NJ.

At a time when PokerStars New Jersey is witnessing its highest level of online poker traffic following the outbreak of coronavirus that has plagued the world, the operator has rightly timed its annual spring series in the Garden State.

Exactly $1.2 million in prize money is guaranteed in this year’s NJSCOOP schedule—an increase of 20% on last year’s series.

The prize money is spread across 48 events, each with two tiers: High and Low to make up a total of 96 tournaments—up from 82 last year. This includes two High and Low Main Events that offer $100,000 and $30,000 in guaranteed prize money, respectively.

With a total of 96 tournaments, it is the largest NJSCOOP schedule to date in its five-year history.

The remaining schedule includes a variety of structures including the very popular progressive knockouts (PKO), Deepstacks, Zoom, 3-max and 4-max tournaments as well as a couple of heads-up tournaments.

No Limit Hold’em tournaments make up a majority of the schedule, but there are other poker variants too including different types of Omaha variants, Stud Hi/Lo and 8-Game.

In addition to the 96 tournaments, there are a couple of associated promotions, including freerolls and a special NJSCOOP edition Spin & Go.

The special promotions for NJSCOOP 2020 include:

With a total guaranteed prize pool of $1.2 million, it is PokerStars NJ’s biggest online tournament series in two years.

The last time, PokerStars NJ held a bigger series than NJSCOOP 2020 was NJSCOOP 2018. That series had $1.3 million guaranteed prize money spread across 80 tournaments. Since then, the tournament guarantees have come down with last year’s NJSCOOP guaranteeing only $1 million.

However, recently the online poker industry across the globe has been witnessing a huge surge in traffic as a result of the outbreak of coronavirus that has forced many to self-isolate at home. The pandemic outbreak has affected various businesses and industries, including the closure of live casinos and poker rooms across the US and elsewhere.

As a result, more and more players are switching to online poker platforms including PokerStars NJ which is currently peaking at an all-time high for cash game traffic, averaging 217 concurrent cash game seats based on 7-day moving average. 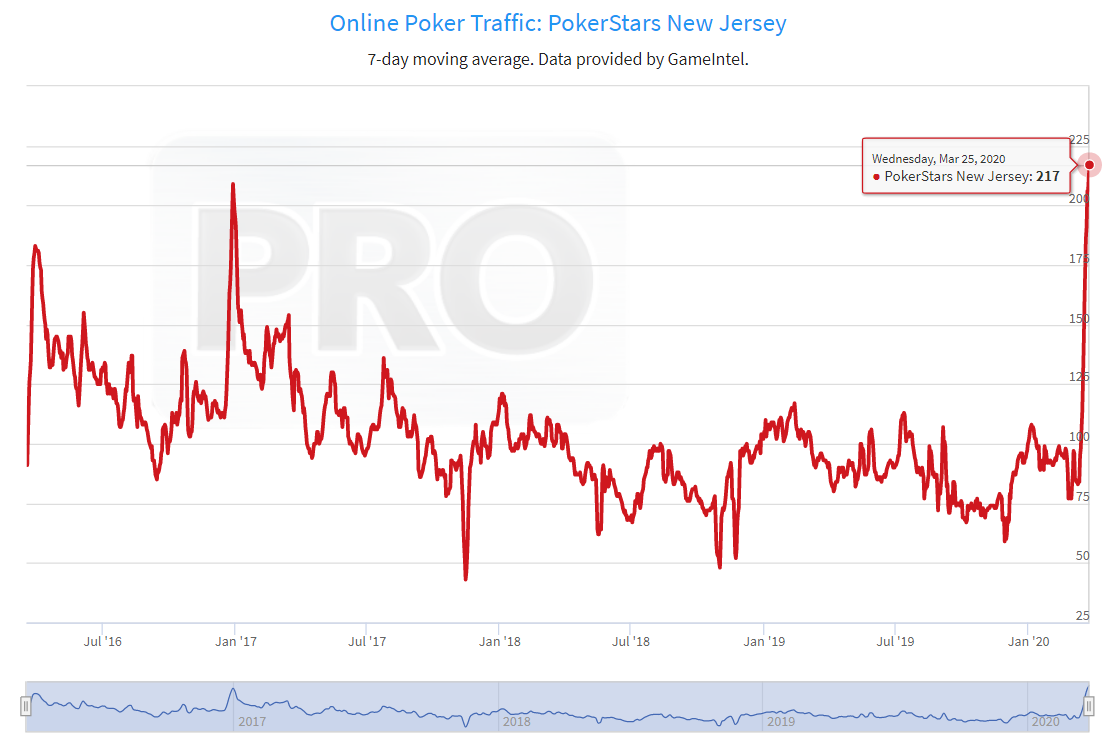 On March 22, PokerStars NJ saw the most number of players in a single day, with 258 concurrent cash game seats occupied. This beats the previous high of 244 seats seen in December 2016.

Turnouts in tournaments were also high on that day, with the Sunday Special exceeding its $40,000 guarantee to nearly reach $50,000.

Considering that the traffic is only expected to rise due to the lockdown imposed in New Jersey, scheduling NJSCOOP in April makes sense for the operator—a series that usually takes place in late April and early May.

PokerStars US Outage: Cash Games, Spin and Gos are Back in Michigan, Pennsylvania After Unprecedented Downtime