As a new wave of COVID-19 cases sweeping across the world coincides with the seasonal busy season for online poker, another boom could be in the cards.

With large parts of Europe now in the grip of a second wave of lockdown due to the rising cases of COVID-19, and with cases also spiking in the US and many other parts of the world, online poker may be heading for another surge traffic.

The latest cash game traffic statistics show that in the last two weeks, the segregated European online poker market (comprising of France, Spain, and Portugal) has grown by nearly 30% and the segregated market in Italy is up 18%. 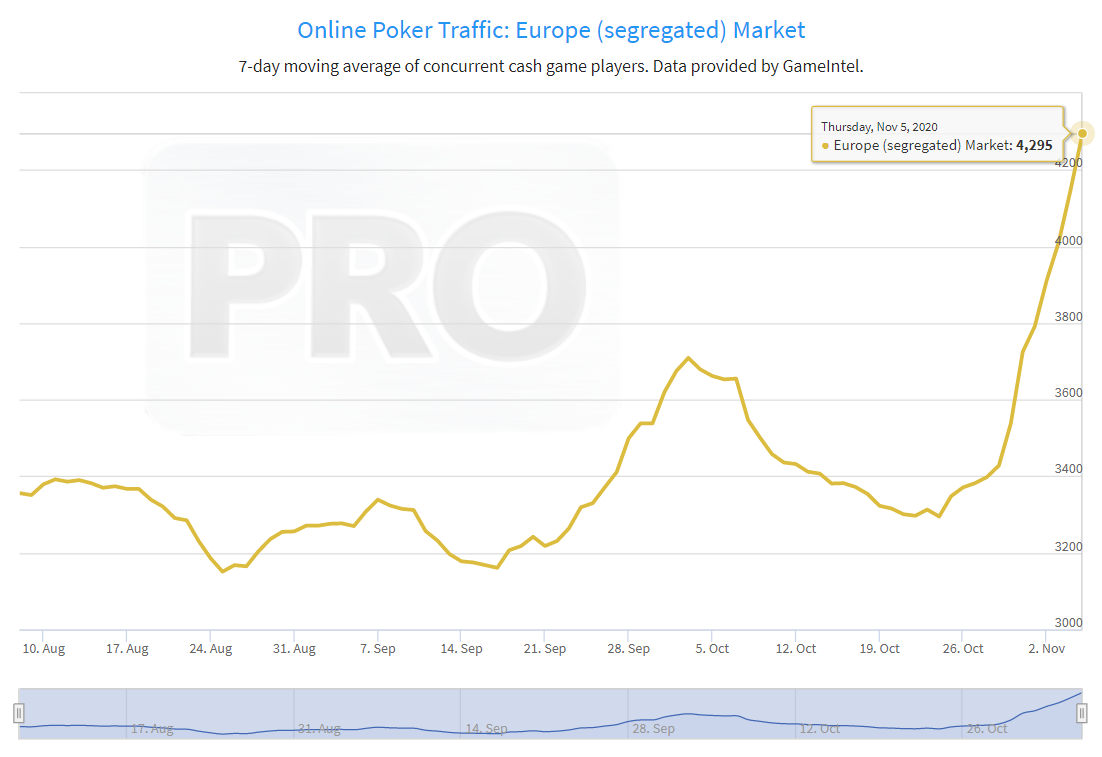 This level of increase in the market was last seen when Europe was bracing for the first wave of lockdown between February and March.

With coronavirus cases soaring to record levels, many European countries such as France, Germany, Italy, UK, and Portugal have imposed new lockdown orders.

As a result, online poker traffic in these countries is surging again.

Meanwhile, the global dot-com traffic has not seen the same rate of increase yet, but it is trending upwards, and regulated online poker in the US is rising again as well.

Is Another 2020 Online Poker Boom Coming?

Based on the seven-day moving average, the dot-com cash game traffic is currently averaging 15,601 concurrent seats as per statistics tracked by GameIntel and available exclusively on the Poker Industry PRO platform. 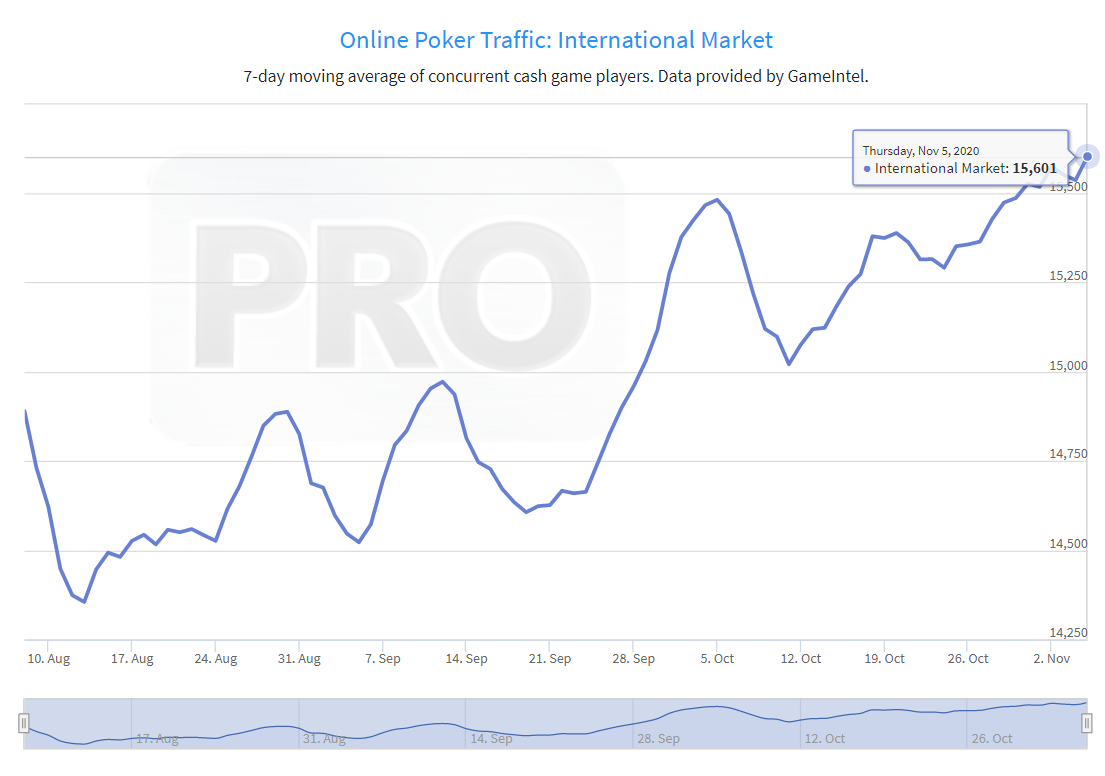 This growth is typical due to the seasonal trends usually seen from November onwards every year, but when coupled with lockdowns making a comeback in Europe, there is a possibility that online poker traffic may once again skyrocket within the coming weeks and months.

Earlier this year, when lockdowns kicked in across most parts of the world, online poker rooms enjoyed record cash game traffic and weekend tournament turnouts.

It started with the massive spike in the Southern European market in March where the traffic doubled within a matter of weeks. This trend was followed in international markets where the traffic soared to levels last seen six years ago.

The unprecedented growth witnessed earlier this year was significant enough to be categorized as a mini-boom. Global cash game traffic had peaked at 55,000 cash game seats, nearly doubling its traffic from around 30,000 seats in February. 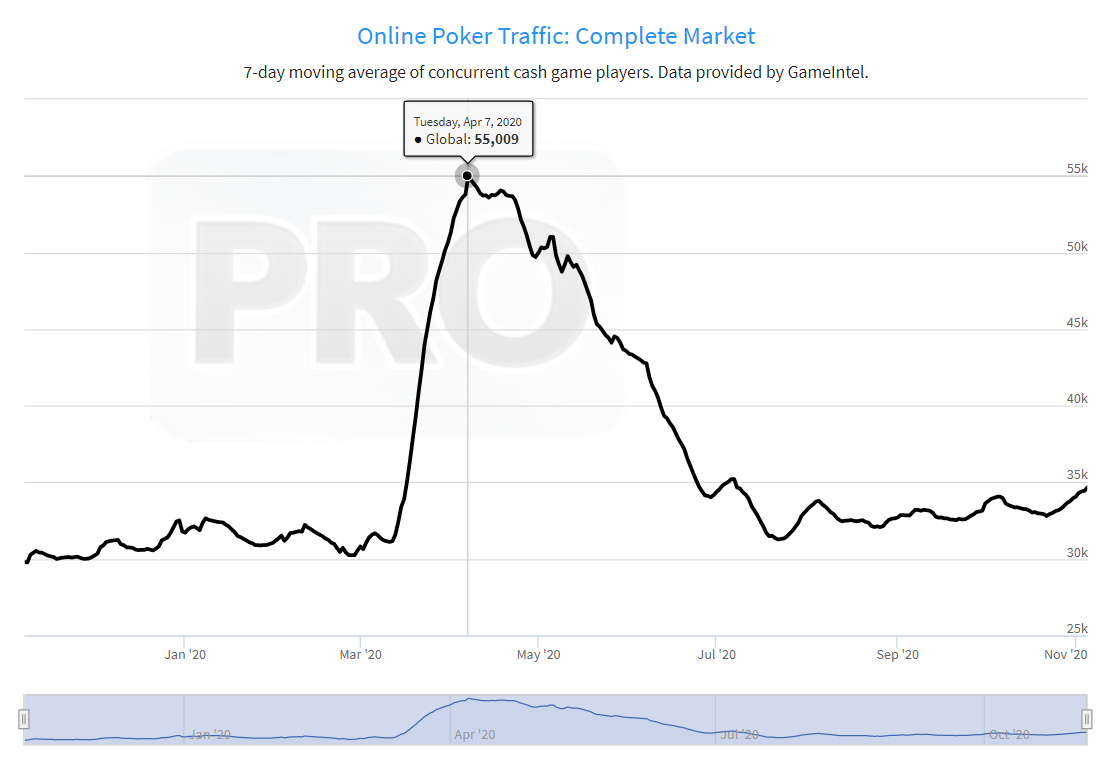 The spike came during the early weeks of summer which is traditionally a quieter period.

That level of performance may not be repeated due to the fact that players’ bankrolls may have been depleted and some countries are resisting going into lockdown again, but still, a significant traffic spurt is expected in the coming weeks and months.

Already, year-on-year figures for the international dot-com market are up by over 30%. While much of that growth is fueled by the meteoric rise of GGPoker, other established operators such as PokerStars, partypoker, and Unibet have all seen growth.

Online poker giant, PokerStars, is up by over 7%, while partypoker has seen impressive growth of 30%. 888poker is up just over 2% while Unibet has jumped up by 11% year-over-year.

iPoker has leaped 62%, but that is mostly due to former MPN skins moving to the ipoker network following the closure of MPN.

A similar trend can be seen in the US regulated market.

Year-over-Year, PokerStars New Jersey is up by nearly 50%, the All American Poker Network (home of WSOP NJ, 888 NJ, WSOP NV and three smaller online poker rooms in Delaware) is experiencing a similar trajectory, and partypoker US network (currently limited to just partypoker NJ) has quadrupled.

However, currently, cash game traffic is on a downward trajectory. 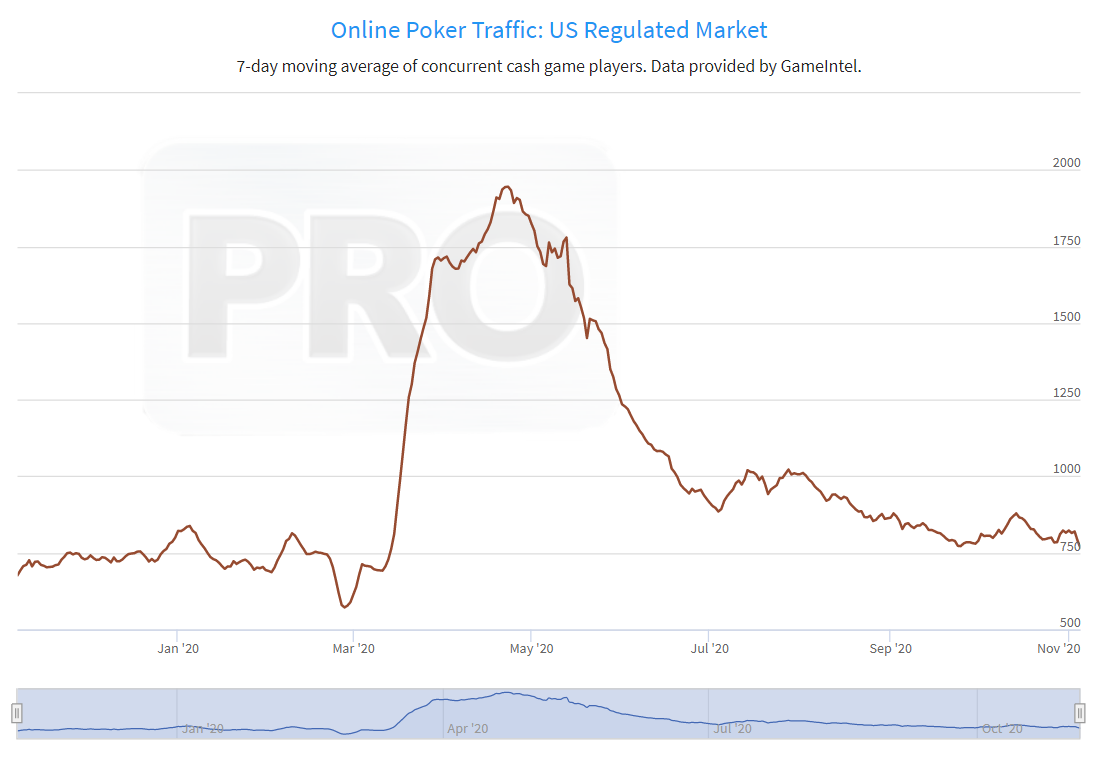 The New Jersey online poker market is a bit different compared to the international market. Traditionally, November produces some of the lowest revenues of the year, but things start to improve from December onwards.

So the online poker market in the US regulated markets is likely to witness growth towards the end of the year and at the beginning of 2021.

Also, the Pennsylvania online poker market could see the end of the monopoly of PokerStars PA with the arrival of partypoker PA and/or WSOP PA which would boost traffic further in 2021.

Additionally, the resolution of the Wire Act case (which has stunted the growth of online poker in the US by restricting shared liquidity) could also lead to another online poker boom in the US.

The case could be resolved with a favorable decision from the the United States Court of Appeals for the First Circuit, where a decision could come down any day now.

The issue of shared liquidity could also be resolved via a Joe Biden presidency, as the former vice president would likely instruct the Department of Justice to abandon efforts to reinterpret the Wire Act.

Either way, a favorable resolution would allow Pennsylvania to join the MultiState Internet Gaming Agreement, and in doing so, allow its online poker room(s) to share player liquidity with their operations in other states that have legal regulated online poker.

There is also a bill circulating through the Michigan legislature that would allow its online poker market (once it launches) to also participate in US shared liquidity.