Around 20% of players have been randomly selected to try out the operator’s new rewards system that switches back to a traditional volume-based loyalty scheme.

This trial has ended, and the new rewards program has rolled out to everyone.

Check out our full FAQ on PokerStars Rewards for more.

Online poker giant PokerStars is trialing a new rewards system that aims to address most of the concerns and issues players have over the existing PokerStars Rewards program.

Under the new rewards system that is available to trial by select players until September 30, players can now earn up to 65% cashback—a massive improvement to the value of the rewards and a return to the era when PokerStars offered Supernova VIP levels with rakeback of up to 70%.

We’ve been listening to customer feedback with plans to make improvements for some time now, and this trial is the largest step we’ve taken thus far to address player concerns

Furthermore, the rewards system has been overhauled, making it “more transparent”, “easier to understand,” and more importantly, the new scheme encourages players to put in more volume. This change in stance stands in stark contrast to the priorities identified by the operator when it revised its loyalty program years ago, i.e, reducing rewards for high volume and winning players and increasing rewards for losing and recreational players.

The base rewards system offers 15%-25% in rewards, but the newly launched Monthly Poker Challenges allows players to earn additional cashback of up to 40%, bringing the total possible rewards to 65% of rake and fees paid.

With the program topping out at 65%, PokerStars new rewards surpass many of the other top online poker rooms including GGPoker and partypoker whose rewards programs offers players up to 60% cashback.

The trial began on July 6 and will be available until the end of September. It is being trialed in the global markets (dot-COM, dot-EU, and the UK) and in the European segregated markets (France and Spain). If successful, the operator is expected to roll out the new version of PokerStars Rewards with increased rewards globally.

“We’ve been listening to customer feedback with plans to make improvements for some time now, and this trial is the largest step we’ve taken thus far to address player concerns,” Severin Rasset, Managing Director of Poker, PokerStars told pokerfuse in an exclusive interview which will be published later this week.

Pokerfuse understands that 20% of the player pool has been randomly selected for the trial.

Players who have been selected for this trial will earn 100 reward points for every $1 rake generated across all game types including MTTs. In the existing loyalty program, players earn just 45 reward points for each $1 rake in MTTs.

Furthermore, players will also receive reward points at high stakes games including 8-Game with stakes of $20/$40 or higher and other limit games which had been previously excluded from the rewards program.

New PokerStars Rewards Start at 15% For All Players

The Chest mechanism remains the primary vehicle for delivering rewards, but the prizes are now fixed.

Every Chest in the trial rewards program has a fixed prize ranging from $0.50 at the lowest-tiered Blue Chest and $250 at the highest-tiered Black Chest.

This means that every player—winning or losing—will now earn a minimum of 15% in rewards. Furthermore, the point requirements to unlock a Chest are now the same for all the players—improving the transparency and making the system fairer for all type of players, unlike the current model that rewards players on an individual basis.

For instance, to unlock the Blue Chest, players will need to earn 333 reward points by generating $3.33 in rake and will receive a reward of $0.50 (worth 15% in rewards). The point requirements will be the same for everyone no matter the player profile.

Similarly, players will need to earn 2850 points to unlock the Silver Chest which is valued at $5 (worth 17.5% cashback). The higher the Chest value, the higher the reward point requirements. The Black Chest is the most expensive requiring 100,000 points for a reward of $250 (worth 25% cashback, the highest).

New Monthly Poker Challenges Offer Up to 40% in Additional Cashback

The star highlight of the new rewards system is that players can earn additional cashback of up to 40% thanks to the introduction of the new “Monthly Poker Challenges.” 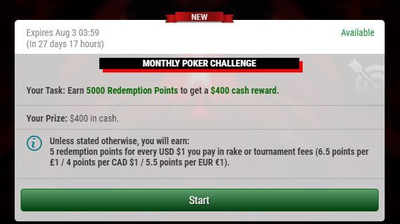 These monthly challenges provide rewards that could be anywhere from $40 to even $2400 or even more. But here, the reward and point requirements will differ based on player profiles.

This means that on the lowest level, the new rewards program when combined with monthly challenges is worth up to 25% cashback and at the highest level, 65%. 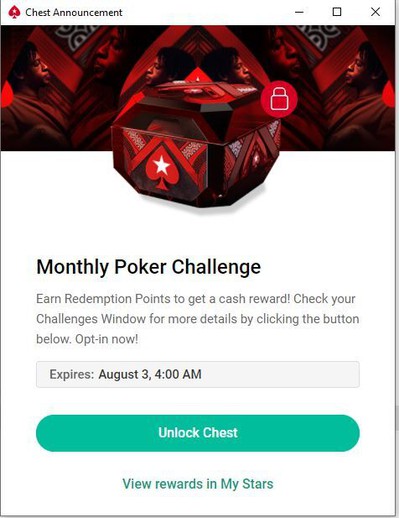 Poker challenges are not a new thing as PokerStars has been offering additional rewards to select players, but under the new program, these challenges will be available to all players.

It marks a significant improvement to the generosity that exists under the current rewards system, where some players (mostly winning and high-volume players) are reportedly receiving rewards close to just 2%.

However, the increase in generosity and switch to the traditional volume-based program is not surprising. PokerStars’ parent company Flutter last year signaled a new direction for the company and admitted that the “customer generosity … has reduced significantly over the last five years” referring to the closure of its VIP program. When PokerStars was bought by Amaya, its new owners scrapped its Supernova Elite tier and capped rewards at 30%.

In November 2020, the operator further admitted that the WSOP online series that ran on its competitor’s site (without naming GGPoker) “had an impact on performance.”

Very recently, it lost its crown as the world’s leading online poker room to GGPoker after being the number one in terms of cash game traffic for fifteen years.

Certainly, the new rewards system appears to be in response to increased competition over the last two years and players’ feedback.

PokerStars introduced Stars Rewards (now called PokerStars Rewards) back in 2017 with the goal to award more to losing and recreational players. This also meant that the rewards had to be significantly reduced for high-volume and winning players which led to an organized protest by regular and professional players.

Over the years, PokerStars continued to make changes to its Stars Rewards program including recently flattening the payouts. But this marks the first drastic change to the rewards program in four years.

We’re really interested to hear what our players think of this new program. Players selected for this trial will be sent surveys so we can get their feedback and gain valuable learnings to define our next steps

However, only time will tell, whether PokerStars will replace the existing PokerStars Rewards program with the new one. PokerStars, meanwhile, will gauge and review the trial before deploying it globally. The operator will be sending out multiple surveys to players who have been picked for the trial to get their feedback and thoughts.

“We’re really interested to hear what our players think of this new program. Players selected for this trial will be sent surveys so we can get their feedback and gain valuable learnings to define our next steps,” Rasset told pokerfuse.

The trial version of the new PokerStars Rewards program runs until September 30 and is available only to select players.

Another action-packed WCOOP series has ended as PokerStars’ WCOOP Take 2 Main Events wrapped up, and the ultimate…

One of the world leaders in online poker, PokerStars, has entered a partnership with Poker Power to find new ways to…

PokerStars is off to the races with its latest promotion for players. Spin & Go Races is a uniquely structured…