eGaming Review gave 888poker top marks in casino and poker during its 20th year in operation.

888poker is celebrating its 20th birthday this year, and eGaming Review (EGR) gave an unexpected present to the operator. In recognition of 20 years at the forefront of online gaming, EGR has recognized 888poker with two key awards designed to recognize industry excellence.

It has been a big year for 888poker, as the operator celebrates 20 years in the online gaming industry. For two decades, 888poker has been providing top-echelon online gaming experiences for players worldwide. Now, one of the leading voices in the industry has recognized that contribution with awards on both the poker and the casino side.

EGR is widely recognized as a world-leading voice in the online gaming industry and its annual awards recognize to recognize excellence and longevity in the field. The awards are judged by an independent, external team of judges who provide an unbiased analysis of industry stakeholders to find the best and brightest. 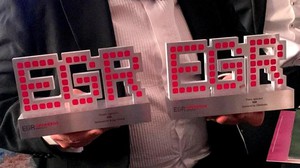 EGR Awards are all about recognizing and celebrating excellence in the online gaming industry. The awards promote and identify the best operators in the industry in terms of software, culture, customer interactions, and industry presence.

The awards are independently judged by a panel of outside experts that understand the industry inside and out. That makes it the premier awards ceremony for the North American gaming market.

While 888poker’s 20 years of service to the industry was a big part of the awards, the rewards were not handed out based on that merit alone. The operator has gone through some major changes over the past year in terms of software, reach, game types, and media exposure.

The company’s commitment to improvement is a key reason for the recognition this year, and there has been a lot of growth. Besides major new software upgrades across its various markets, in recent times, 888poker has introduced several new game types like Mystery Bounty, which has been catching on like wildfire recently, as well as key changes in its ambassadorial and streaming teams.

888poker with Major Changes in its 20th Year

888poker put in a lot of work recently to earn this award. In the past 18 months, the operator has rolled out a major new software upgrade across its global markets, beefed up its live and online tournament series offerings, developed new game types, and expanded its customer-facing presence.

Perhaps the biggest upgrade in recent times was the major upgrade to the playing environment of the 888poker online poker app. The new Poker 8 platform has now rolled out to most markets that 888poker operates in around the world, including Pennsylvania and Michigan, new markets for the operator in 2022.

The new software has rolled out across the globe for players outside the US as well, so nearly the whole world is now playing on the Poker 8 platform. That rollout also points to the other big news from 888poker recently — expansion in markets across North America.

In addition to the new US online poker markets of MI and PA, 888poker has also recently moved into the new Canadian market of Ontario. Across the US, 888poker partners with WSOP.com, running WSOP-branded poker rooms in those jurisdictions, as well as its own skin in some cases.

From those three jurisdictions alone, the operator has added more than 37 million potential customers to its services in 2022, continuously expanding the scope. 888poker introduced the red-hot new Mystery Bounty format in 2022, which has proven as popular online as it is in the live poker arena.

For its 20th year of operation, 888poker also threw a host of online poker parties to celebrate the occasion. Many of these, like Retro Week and the recently completed XL Retro Series, were explicitly themed to tie into the historic aspect of 20 years in the game. Additionally, 2022 saw the operator return to the live circuit after the COVID-19 shutdown with several very successful live festivals in places like London, Barcelona, and Malta.

Finally, the operator has also expanded its media presence through changes to the ambassador and stream teams, including the addition of Ian Simpson, Cauê Moura, and boxing champ Chris Eubank Jr. Those additions were coupled with the introduction of 888pokerTV, the operator’s Twitch channel featuring live action, big online games, training, and culture streams throughout the week.

While it is always nice to be recognized by the industry and peers for excellence in a given field, for operators focused on the business, it is just icing on the cake. The real reward comes from the growth and success upon which those awards are invariably based, and 888poker will surely be happy with both its cake and the icing.