Ramon Colillas from Spain took home the $5.1 million prize money at the PSPC, after going heads up against WSOP 2018 bracelet winner Julien Martini.

On Thursday, Ramon Colillas from Spain took down the PokerStars Players No Limit Hold’em Championship (PSPC) for $5.1 million dollars, beating a field of 1039 players.

It’s a story PokerStars could only have dreamed off: That an unknown poker player and Platinum Pass winner that would go on to win the $25,000 tournament—turning it into a modern day Chris Moneymaker story.

“A lot of players were saying this was the most important tournament in history, so now it’s only about happiness and enjoying the moment,” Ramon Collilas told the guys over on the PokerStars Blog after his win. 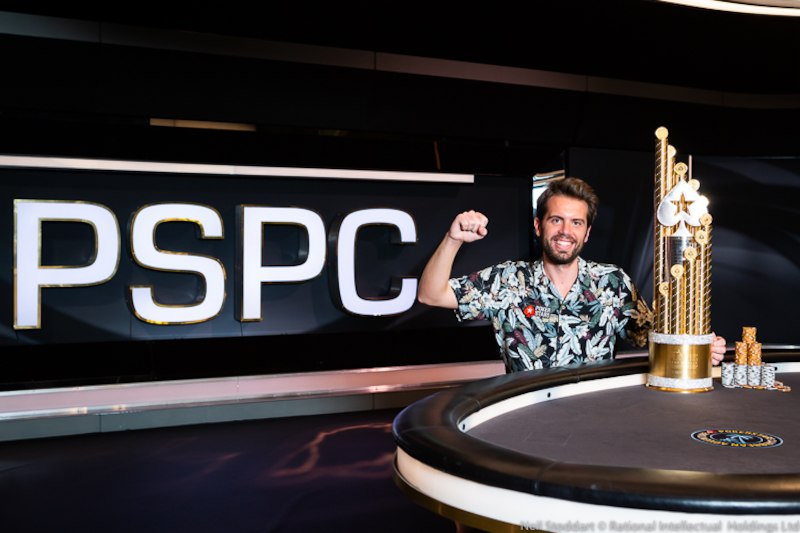 Colillas started on this road to the PSPC after winning a Platinum Pass via the 2018 Campeonato de España de Poker. According to his Hendon Mob profile, he has had no substantial cashes to him name before taking his seat in the Bahamas.

Colillas became a professional poker player at the age of 24. Six years later he has knocked out some of the best poker players in the world to take down the PSPC title. Colillas is now sitting in fourth position on the Spain All Time Money List having previously not ranked, thanks to his recent win.

Colillas went heads up at the end against WSOP 2018 bracelet winner and EPT second place finisher Julien Martini from France to win the title. Martini ended up taking home $2.9 million in prize money.

Here’s the moment it all happened.

You can read our full profile on Colillas here.

The Platinum Pass Giveaway Deemed A Success: “Let’s Get Them on Ellen”

With 1039 players registered to play the $25,000 buy-in PSPC tournament—320 coming via the PokerStars Platinum Pass giveaway and the rest either buying in, or winning entry via satellite— the PSPC will be go down in the history books as an overriding success.

With the winner and third place finishers of the PSPC being Platinum Pass winners, there is no doubt that PokerStars’ plan to send a wide range of players into a tournament—that would usually be for high rollers only—was inspired.

Third place finish went to Platinum Pass winner Marc Rivera, from the Philippines, who ended up bagging $2.168 million for his efforts.

Rivera won the APPT National Event 4 in April last year for $85,940 which saw him win the coveted Platinum Pass. The engineer turned poker pro had a string of live cashes to his name in both his home nation of the Philippines and in the United States prior to playing in the PSPC.

Each Platinum Pass was valued at $30,000 and included a $25,000 buy-in, accommodation at the Atlantis Hotel and Casino resort for the duration of the tournament, plus $2000 towards travel costs to the Caribbean. PokerStars spent the entirety of 2018 committed to giving away hundreds of passes through both live and online paths.

Daniel Negreanu was the first to announce the details of the PSPC way back in December 2017 at the PokerStars Championship in Prague, Czech Republic. Here he is to sum up the event.

“The goal for this event was to create a good number of Moneymaker like stories that can pierce mainstream attention,” Daniel Negreanu told Lee Davy of Calvin Ayre.

“Going forward what’s going to be super important is leveraging everything we did right. If someone does well here let’s get them on Ellen or some other talk show, so they can tell their stories, that’s where my focus would be with it.”

Here’s what Negreanu had to say about the atmosphere over in The Bahamas during the PSPC.

As the #PSPC draws closer to a final table, we wanted to know how the entire tournament even came into fruition. So… https://t.co/z5ghP9qSfk— PokerNews (@PokerNews) January 09, 2019

But there’s plenty still happening over in The Bahamas. While the PSPC is over, the PokerStars Caribbean Adventure (PCA) is kicking into high gear.

Day 1 of the $100,000 Super High Roller is already in the books. Henrik Hecklen is leading the way with 1.3 million in chips, and PokerStars Pro Igor Kurganov sitting in second with just over a million. 36 players remain for Day 2, but late registration remains open until action starts again at midday here in the Bahamas on Day 2.

It is already looking like a healthy turnout, with 56 entries (including 13 reentries) already counted.

Friday also sees the $10K PCA Main Event get started. All eyes will be on the turnout, as no one quite knows how the PSPC will impact the other big events here in the Bahamas.

Watch all the action over on PokerStars Twitch channel as it plays out into Day 2.

PokerStars Ontario got off with a bang this week as the operator launched its new client in the jurisdiction. As part…

With the PokerStars Players Championship (PSPC) coming up in January 2023, PokerStars is offering many ways to qualify…

PokerStars Has Given Away Nearly 300 PSPC Platinum Passes

PokerStars has given away close to 300 Platinum Passes to PokerStars Players No-Limit Hold’em Championship (PSPC)...