WSOP.com plans to launch in PA and MI soon running on 888poker’s Poker 8 software—here is what it will look like.

Recent revenue reports from 888poker have indicated a clear plan to launch online poker in Pennsylvania and Michigan before the end of June, and those same reports confirm that the new jurisdictions will run on the new Poker 8 software.

To date, the United States markets have been left out of the global Poker 8 rollout.

The new software has been deployed across the rest of the global poker market over the past 18 months, but the only US market the operator is involved in—New Jersey—has been left out of the upgrade plans so far, as has its partner WSOP in Nevada.

New Jersey still appears to be at the bottom of the upgrade list, but during a recent report on 2021 Q1 earnings, company brass confirmed that PA and MI will launch “in the first half of this year.” The presentation highlighted a “Poker 8 roll-out in Pennsylvania, Michigan set for 2021.”

At the end of March pokerfuse got a sneak peak at how the new client might look in the as-yet-unlaunched PA market. Based on the early look, the new interface will be a sleek, modern upgrade to the classic look of the WSOP.com in New Jersey, Nevada, and Delaware.

The new tournament lobby looks to be a serious upgrade on the previous versions. A clear filter bar at the top lets users filter the games that appear in the tournament list, and columns in the list are sortable for convenience and game targeting.

The cash game lobby is also significantly improved, with large filter buttons for poker game, stakes, table size, and game type, letting players tailor their lobby to see exactly what they want to play. Players select various lobbies on the left side of the client, including a special Beginners area for new players to find games more easily.

Overall, the new client moves WSOP.com into the modern world of poker clients. While the existing version is still very functional, and has stood the test of time, in recent years it has been falling behind other operators who have redesigned their clients for the modern world. 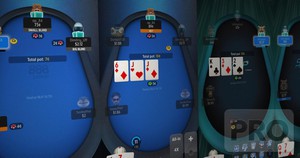 The changes are more than just cosmetic as well. The new filter design is much easier to use, and lets players find their favorite games much quicker.

The overall response for the new client is also faster, letting players move from one game to another more efficiently. And while there has been no sneak peak of the planned mobile client in the US market, the global version adds significant features with a portrait-first design and the ability to play up to four tables at once with easy swiping between tables.

A side-by-side look at the classic client in use in New Jersey now, and the new sneak peak, makes the upgrade clear. By the end of 2021, the client experience for users of WSOP.com and 888poker in the US will be radically different, and much improved.

The Only Multi-State Online Poker Network

While WSOP.com and 888poker are the last of the three major operators in the US market to expand beyond their initial footprint in New Jersey, Nevada, and Delaware, they are still in a unique position in the US market in terms of liquidity.

The other major operators in the US online poker space, PokerStars and partypoker US Network, both run segregated state rooms, with no shared liquidity across state lines, but WSOP.com is alone in operating a multi-state network that shares a player pool across state lines in the US. In addition to serving New Jersey players, poker fans in Nevada can play in the same games using a WSOP.com client, while Delaware players can join in the fun through three “racinos” licensed through the Caesars partners.

The reason for the discrepancy is a bit of a long story involving launch schedules and a reinterpretation of the Wire Act that led to a chill in new multi-state networks, while keeping 888poker’s existing network in place.

That may have influenced 888poker’s expansion and upgrade plans as they were operating in something of a legal quagmire. For whatever reason, the existing 888poker/WSOP.com US clients were left out of global upgrade plans for Poker 8, and are still running on the classic version of the client.

Additionally, the operator has stood on the sidelines as competitors launched segregated state rooms in two different jurisdictions, but that all looks to be changing this year. The existing New Jersey/Nevada/Delaware network is on the upgrade plans by the end of the year, while PA and MI are scheduled to be online by the end of the first half of the year.

After a few years of standing still while competitors expanded around them, 2021 looks to be a big year of expansions and upgrades for WSOP.com and 888poker in the US market. Expect the operator’s US footprint to look substantially different by the end of 2021.

888poker Heats Up the Season with 2022 XL Winter Series

888poker has teased details of its first online tournament series of 2022, XL Winter Series, which begins on January 16…

The WPT DeepStacks Series has been running at 888poker since November 28, with a total of twenty events already in the…

The WPT DeepStacks London Online Series is back, following its last successful run-out in April, available on 888poker.

Progressive knock-out (PKO) tournaments have been increasingly popular in recent years, with all major online poker…

888poker has released details of recent efforts to combat fraudulent play on its site. The operator has shut down 85…

888poker’s XL Autumn Series has drawn to a close, with the $1050 Main Event attracting a thoroughly respectable 948…