After paying out significant overlay in the last Online Series in New Jersey, the Borgata brands put on another series for June

Borgata Poker NJ, in conjunction with partner brands BetMGM and partypoker, are throwing another poker party in June in an attempt to hold onto its second place market position.

The latest series comes just a couple weeks after their last series ended on a bit of a surprise note: Despite their solid numbers in terms of revenue and cash game traffic, the May partypoker Online Series in New Jersey fell short of the guarantees by more than $55,000, providing a lot of value to players.

Despite the lower overall guarantee, there is still a lot of value in this series for players—perhaps more so than in May. Both the final event (that closes the series with a big guarantee) and the opening event have had their buy-ins reduced by more than their guarantees, putting extra potential value in the pot for June.

Borgata shares a player pool in New Jersey that includes its own skin, as well as BetMGM Poker NJ, and partypoker. Together, the three make up the partypoker US Network; since late 2020, it has been holding second place in a couple of key indicators in the New Jersey market.

The Borgata brands were consistently third place in the market from their launch up until the end of 2020, trailing behind leader WSOP.com and second place PokerStars in both cash game traffic and overall revenue.

The latest Online Series is scheduled to start tomorrow, Sunday, June 6 through to June 13 with a total of ten events. In May, the series guaranteed $325,000, but when the dust cleared, it only collected $267,634 in entries.

The smallest event, Event #2: $10K GTD 8-Max Mini NLH also ended up with less than 75% of the guarantee in entries.

The way Borgata has addressed the previous shortfalls in the latest schedule is interesting. This time around, the total guarantee has been reduced to $280,000, with the main difference between the May and June schedules for the Online Series coming from reduced buy-ins for the two biggest events, and a smaller guarantee on the final event.

To be fair, there is at least one game in June that looks to have a bit less value in it. Event #3 is twice the buy-in this time around, but the guarantee is only 25% higher. Overall, the June series looks slightly juicier than May, with almost $113 of guarantee per dollar of buy-in, versus just over $104 in May.

Solid Results for Borgata in 2021

2021 has been a good year so far for Borgata in New Jersey online poker. In December of 2020, it overtook PokerStars for second place in the revenue race in the market, with both operators behind the market leader WSOP.com, powered by 888poker software. 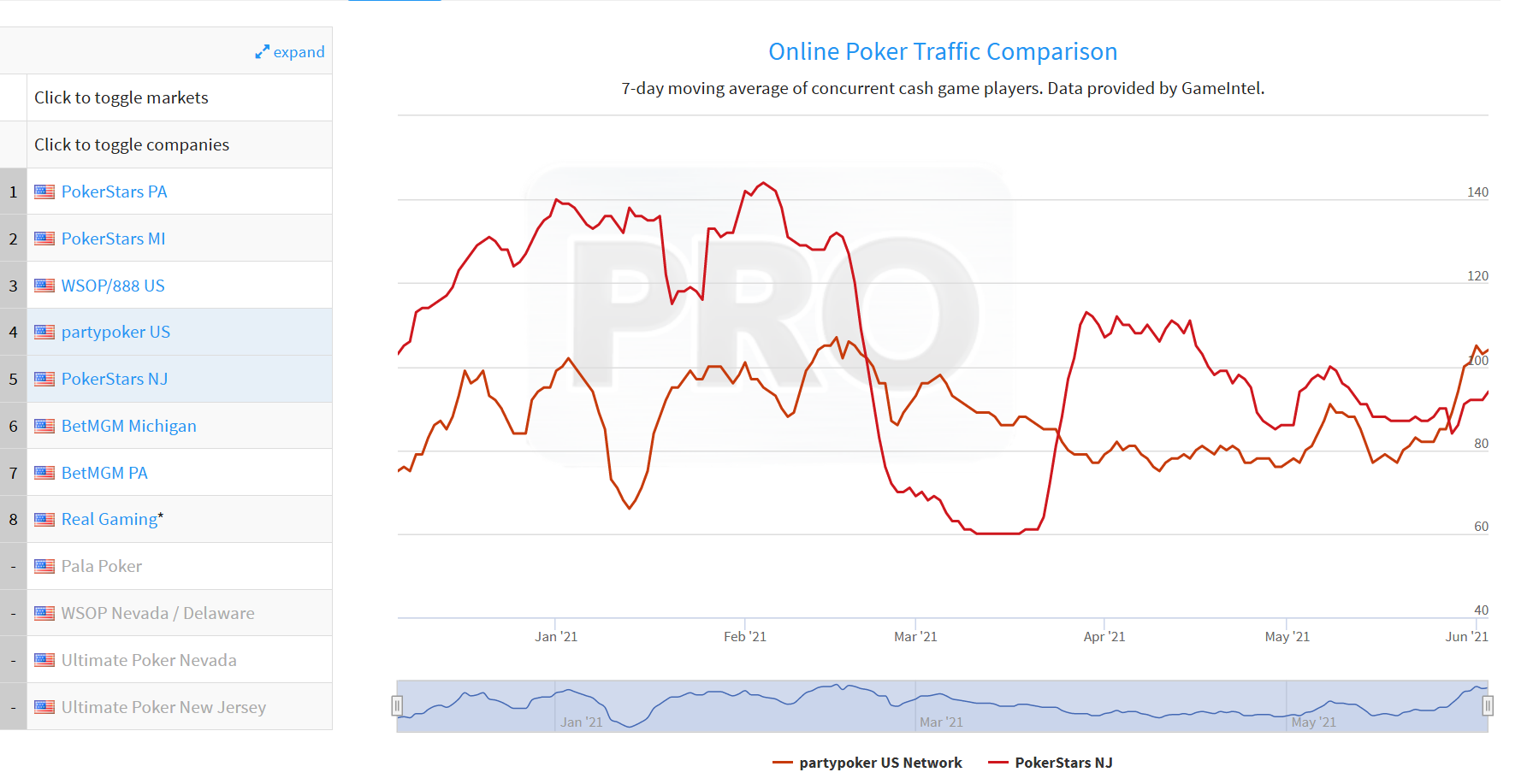 While the cash game traffic is a very recent change, the revenue position has held steady for all of 2021. Borgata put in a huge month with over $1 million in revenue in December of 2020, which pushed them close to the market leader, WSOP.com’s $1.175 of revenue. Third place PokerStars lagged behind that month with less than $775,000.

Since then, Borgata’s lead has diminished a bit, but it has maintained its second place spot. It came close to dethroning WSOP.com in March of 2021 as well, and has had more ups and downs than the more consistent revenue from PokerStars, but even the lows have been high enough to keep them in second place.

While overlay in an online series isn’t the end of the world for a poker operator, it is not a sustainable model over the long term for obvious reasons. In the short term, overlays can help inject money into the ecosystem and attract new players to the platform, but over the long run, operators need to be making money, not giving it away.

Borgata appears to be banking on the idea that lower buy-ins with more guarantee value on their biggest events is the way to attract more players. The latest series, running from June 6 through June 13, will put that idea to the test.

World famous poker champion Darren Elias has entered a partnership with partypoker US and BetMGM USA, an industry…

The most recent revenue numbers from New Jersey showed a strong month of results in the poker vertical, with the…

The Pennsylvania poker market has recently expanded from a single operator to a total of three now, with the recent…

BetMGM intends to offer Spins lottery sit and gos in all the US markets it operates in, pokerfuse has learned.

Borgata Poker USA began on November 26, 2013 when it launched in New Jersey. The site has been live ever since, making…