Just days after the soft-launch, there is already huge value in Pennsylvania as WSOP PA has announced a $50,000 Depositor’s Freeroll with three huge added prizes—tickets to the $10,000 Main Event at this fall’s World Series of Poker (WSOP) in Las Vegas.

The depositor’s freeroll is slated to run on August 22 at 4 p.m. eastern, and will be open to new depositors who make a deposit before August 15. There will be $10,000 Main Event tickets awarded to first and second place in the freeroll, but the third ticket will be handed out randomly by a draw from participants.

WSOP.com jumped into the market in PA, competing with the existing PokerStars PA and BetMGM Poker PA. PokerStars has a mammoth lead in the state for the moment, after holding a monopoly on the PA poker appetite for more than a year.

The new WSOP room in PA is added to, but separate from, the multi-state network WSOP runs for customers in NJ, NV, and DE. While the new room in PA runs with its own segregated player pool, it does have access to the latest and greatest in 888poker software—Poker 8.

Partner 888poker provides the software for all the WSOP deployments in the US, but the PA market is the first US market to get a look at the new version of the 888 software that the world has been playing with for a while now. 888 plans to roll the new software out across the US, but for now, the NJ/NV/DE operation still runs on the classic software.

Free Shot at the Big Show

While the site is still in soft-launch stage, it has already put some huge free value on the table for new customers. High-value depositors freerolls are generally a great way to reward new customers, especially as the newcomer in a market, but the WSOP has extra value to tack on as well.

After a highly modified version in 2020, the live Main Event is back with its dates transposed to November, and WSOP PA is looking to send three of its new customers to Vegas to play in the big game. In addition to a huge $50,000 guaranteed prize pool, first and second place will also get an added $10,000 Main Event ticket.

The third free ticket is more of a wildcard. It will be awarded to one of the other participants in the freeroll, at random. The offer is valid only in Pennsylvania, and the non-transferable winning seats must be used at the 2021 WSOP in Las Vegas.

To be eligible for a ticket to the freeroll, players must:

First US Look at New Poker 8 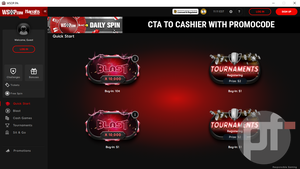 In addition to a chance to freeroll into the Main Event, one of the main attractions of WSOP PA is the debut of 888poker’s Poker 8 software. 888poker rolled out the new Poker 8 software to most of the world through 2019 and 2020, but the US room serving NJ/NV/DE remained on the classic version.

888poker pledged to roll out the new software to the US audience when it went live with a room in PA, and this week’s launch has proven that to be true. In addition to a redesigned desktop client with more intuitive filters, and a slick lobby display, the new Poker 8 Mobile client is a portrait-first client designed for mobile from the ground up.

The huge $50,000 Depositor’s Freeroll is set to run on August 22, and all depositors on the new WSOP PA between July 15 and August 15 will get a ticket to the game. So while the segregated player pool of PA does not have access to the WSOP Online 2021 Bracelet series currently running on the WSOP/888poker US Network in NJ and NV, players on the new WSOP PA still have a shot at the biggest WSOP bracelet of them all.