888poker Heats Up the Season with 2022 XL Winter Series

888poker is starting off the new year with a bang, as the operator announces the return of its flagship XL Winter Series in January, featuring a $500k guaranteed Main Event.

888poker has teased details of its first online tournament series of 2022, XL Winter Series, which begins on January 16 and runs through to January 31. The full schedule from the operator has yet to be revealed, though the Main Event and a $100k Opening Event have been posted in the client.

XL Series is the operator’s flagship tournament brand, with two to three festivals spread across the year. The Winter edition often kicks off the annual calendar, with a Spring and Fall series slotting in later in the year.

The last Winter edition at 888 was over a year ago and had more than $1.3 million in total prizes paid out by its conclusion. The total series guarantees this time around will almost certainly be at least $1 million, though that figure could shoot higher.

The XL Winter Series is the first event that 888poker has announced for 2022. The operator is coming off the back of a very strong finish to 2021, though. It recently concluded its DeepStacks London Online Series, managing to cover an ambitious $3 million guarantee and XL Autumn also finished strong by covering its $1 million Main Event. 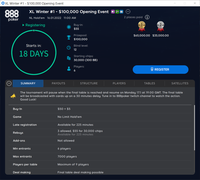 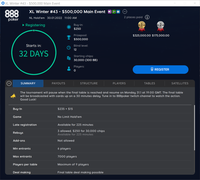 The 2022 XL Winter Series marks the first tournament series from 888poker in 2022. While details for the series are still sparse, there is currently $600k guaranteed in the two events posted so far.

The rest of the 2020 festival did well, however. Overall, the series awarded $1,332,200 in total prizes — 33.2% above the posted guarantees — as many of the other events broke guarantees and more than made up for the shortfall in the Main Event.

888poker ended 2021 on a high, with the recently finished WPTDeepStacks London. That series covered 28 events with $3,310,000 guaranteed and collected about $100,000 more than that guarantee, including an extra $24,000 over the $1 million guaranteed Main Event.

The most recent installment of the XL series — XL Autumn — ran from October into November. This run was notable for being the largest in three years, with a $2 million series guarantee spread across 44 events. Its ambitious $1 million Main Event just managed to cover.

Details on the latest edition of the XL Winter Series are still forthcoming, but 888poker players should mark out Jan 16 – Jan 30 on their poker calendars for 2022. The big games are already announced and the rest of the details will be out soon, but one thing is for certain — the 2022 XL Winter Series is sure to warm up even the coldest January.

888poker’s 20th year in operations is coming to a close as 2022 winds down and we prepare for the new year. As…

As 2022 draws to a close, the 20th-anniversary celebrations of 888poker are also coming to an end. The operator burst…