Everyone knows my story with poker. I’ve been doing videos about this wonderful game for more than ten years. Now my dedication has been rewarded. I’m thrilled to be the new 888poker cultural ambassador. The team at 888poker continues growing with the most recent addition of a new Cultural Ambassador. Brazilian YouTuber and influencer Cauê Moura is now part of the team, bringing his unique personality and massive social media presence to the operator both online and at future live events.

Through his many social media channels, the new 888poker Cultural Ambassador Cauê Moura will bring his influence to the live and online poker stages. The famous Brazilian influencer gets hundreds of thousands of views on his YouTube videos and other forays into the social media world. The operator is looking to capitalize on that popularity.

Moura’s direct and energetic style in his videos will make a mark in both the live and online arenas. With a long history in videography dating back to his earliest work as a cameraman for a parkour channel called PKJUND, the South American brings high production value to his online video work, which will no doubt lead to some unique and exciting poker content in the future. 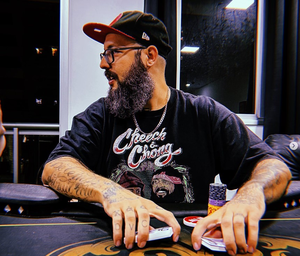 Cauê Moura was already living the dream before the recent announcement from 888poker. The immensely popular vlogger already has millions of followers on various social media channels, including a YouTube channel that goes back to 2010.

Born in São Paulo, Moura’s father got a job in Fortaleza, Ceará, when he was 13 years old, and the family moved. From early in life, Moura was interested in art and filmmaking, getting an early break with the parkour channel mentioned above.

Moura was actively involved in the sport during this time, but injuries forced him to the sidelines of a physically demanding activity. However, his competitive nature could not be tamed, and he soon found poker.

“Everyone knows my story with poker. I’ve been doing videos about this wonderful game for more than ten years,” Moura said. “Now my dedication has been rewarded. I’m thrilled to be the new 888poker cultural ambassador. And, from now on, you guys will see me playing with their patch.”

Moura joins the existing 888poker Cultural Ambassador Chris Eubank Jr. on the team. The latest addition comes nine months after Eubank Jr.'s announcement in January and adds to a growing team of ambassadors and streamers for the brand.

With the addition of Moura, the operator now boasts two cultural ambassadors, four poker ambassadors, and eight 888poker Stream Team members. The most recent additions to the poker team included the former-teacher-turned-poker-pro Ian Simpson, an announcement that followed on the heels of the exit of high-profile ambassador Dominik Nitsche.

The first chance to see the new Cultural Ambassador Moura in action could come soon. 888poker is getting set to sponsor the Battle of Malta in early October, and no doubt the popular vlogger will be eager to show off his new patch on the live poker battlefield.

Check out the newest addition to the 888poker team on YouTube.