Exclusive: PokerStars to Integrate Twitch into its Software Soon

PokerStars has confirmed to pokerfuse that its players will soon be able to connect their Twitch and PokerStars accounts from within the software.

PokerStars’ investment into its presence on Twitch continues as the company now looks to further expand its reach on the world’s leading live-streaming platform in an attempt to introduce the game to a new generation of players and grow poker further.

Last year, our premium news and data analytics platform, Poker Industry PRO, exclusively revealed that PokerStars may be planning to integrate Twitch with its Stars Rewards program in the near future.

Well, that is finally about to happen.

Connecting PokerStars accounts with Twitch accounts means our players can identify themselves as Twitch users, and we can in turn offer them special promotions, items and rewards

Players at PokerStars will soon be able to link their Twitch and PokerStars accounts from directly within the PokerStars client, the industry leader told pokerfuse.

This will allow players to become eligible for exclusive bonuses including “special promotions, items and rewards.”

“We are always looking at new technology and platforms to evolve our offering and to improve the overall experience as part of our commitment to growing poker,” said Scott Goodall, Head of Poker Communities & Engagement at The Stars Group.

“Platforms like Twitch take player engagement to another level, so we’ve been very focused on nurturing that community from the beginning and pioneering efforts there. Connecting PokerStars accounts with Twitch accounts means our players can identify themselves as Twitch users, and we can in turn offer them special promotions, items and rewards,” Goodall added.

It is worth noting that players can already connect their Twitch and PokerStars accounts by going to their official Twitch account and linking their Stars ID through a Twitch extension. However, this option is available only to those users who are subscribed to PokerStars’ official Twitch channel. 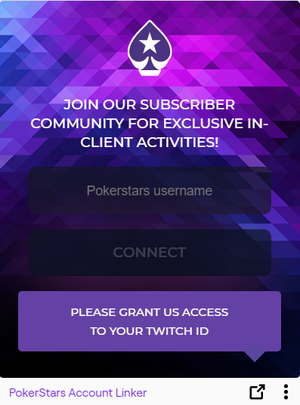 Viewers can subscribe to PokerStars’ Twitch account by paying $4.99 per month. Towards the end of the month, every viewer that is subscribed and has linked their Stars ID successfully is awarded a special Chest (PokerStars’ loyalty rewards program) from which they can win tournament/Spin & Go tickets and cash prizes.

However, being able to connect to a Twitch account directly from an online poker client is thought to be an industry-first.

Operators such as Run It Once Poker, GGNetwork, and US-offshore WPN have used Twitch to great effect by incentivizing players to stream their play live on Twitch by giving them extra rakeback.

Partypoker increased its focus on Twitch this year by partnering with Bill Perkin’s popular Twitch channel dubbed Thirst Lounge. It also launched its Team Online roster which quickly grew to a dozen streamers with two of its highest-profile members being courted from partypoker’s main competitor PokerStars.

But still, no operator has invested as much in Twitch as PokerStars has over the past few years. PokerStars was among the first poker rooms to leverage the Twitch platform in an attempt to build new audiences. It launched its official Twitch channel back in 2015 after signing Jason Somerville, the pioneer of live-streaming poker.

The operator has since used the live-streaming platform for various promotions including the PokerStars Players Championship (PSPC) event. In fact, the company views Twitch streaming as a new route to becoming a professional online poker player.

PokerStars’ investment in Twitch has continued this year when it added a dozen poker streamers to its roster of ambassadors and created a new ambassador category called “PokerStars Streamers.”

It also launched an an interactive Twitch poker streaming concept called “Chat Plays Poker” which allows viewers to take part in the game by letting them vote on how the hands should be played.

“We want to bring our audiences even closer to us, to the game they love, to the content they are so much a part of, and to each other. We do this with things like our support of Lex Live and innovations such as Chat Plays Poker. It means we’ll know our customers even better so we can make every experience even more personal and relevant,” Goodall further explained.

“Integrating PokerStars further with Twitch is just another step of a long list of plans and ideas we plan on testing with the aim of players getting even more from their time with us,” said Goodall.