Switch to a more traditional rewards scheme has proven beneficial for the fledgling online poker room.

Online poker startup Run It Once Poker’s new loyalty rewards program is starting to pay off as its cash game traffic has shown signs of improvement following the launch of Legends.

Based on the 7-day moving average of concurrent cash game players, tracked by independent industry monitor GameIntel and available on our PRO Data platform, RIO’s traffic seems to have stabilized at around an average of 50 seats. 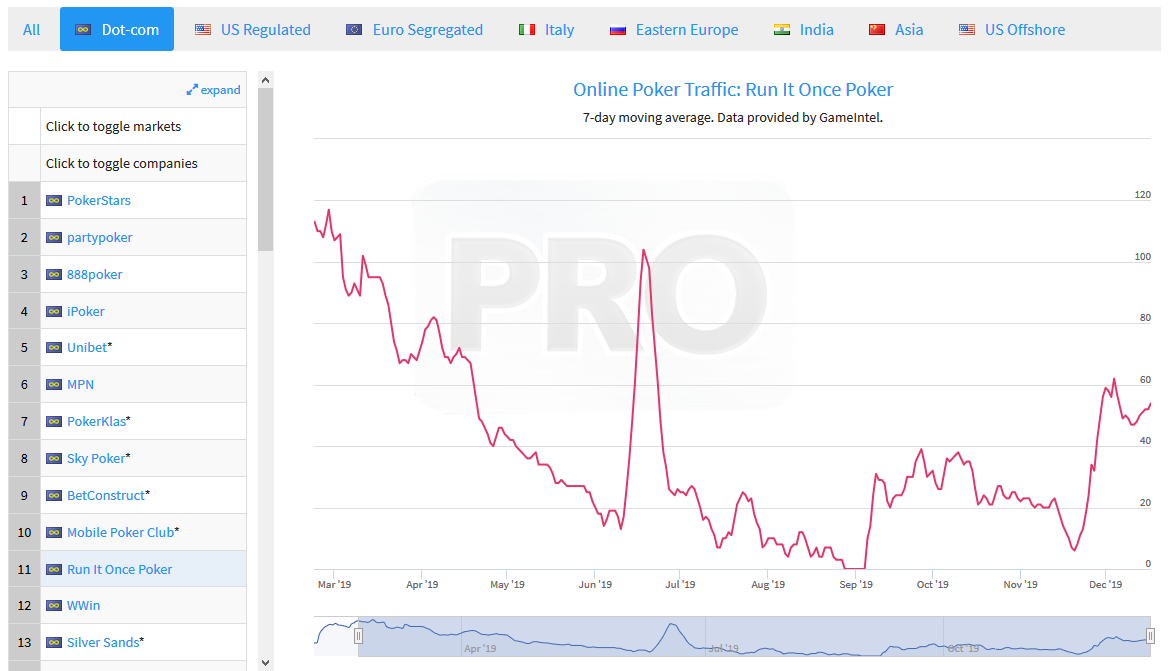 This level was last seen in June when the room launched a week-long “101% Week” promotion—one of the room’s biggest promotional pushes since its launch ten months ago.

However, in the past six months, traffic declined steadily despite a string of promotions that the operator ran almost on a weekly basis.

The latest spike in the traffic is apparently due to the launch of RIO’s new weekly rewards program “Legends” that was introduced last month, coupled with an aggressive “Legends Kick-Start” two-week promotion to celebrate its kickoff.

The room is also currently running a 12 Days of Christmas promotion which may have helped sustain the growth.

Run It Once Poker Offers Up to 75% Rakeback

Introduced on November 25, Legends is more of a traditional rakeback program, rewarding players straight cash in proportion to the amount of rake they pay at the table. Players receive their rakeback at the end of every week.

There are five rewards tiers in this weekly program starting with the basic Clubs through to Legends—the highest tiered.

Players who accomplish Legends tier earn a minimum of 30% rakeback and the rewards shoot up to 45% if they maintain the level for four consecutive weeks.

Previously, the only way players earned rakeback was through the room’s unique Splash the Pot program that returned 51% of all rake collected at the tables in the form of splashed pots distributed randomly at the tables ranging between one big blind to 1000 big blinds. This program stays but the percentage has been dropped to 30% from 51% to make way for Legends.

Hence, Legends combined with the Splash the Pot program effectively rewards players up to 75% rakeback.

For more details on how Legends work, check out our previous article.

The room did experience similar spikes before, but this time around, Run It Once has managed to maintain this level even after the two-week long Legends promotion ended.

Still, the room has far from the kind of traffic that Phil Galfond, the founder of Run It Once Poker, would have liked. It ranks 11th on the dot-com network and 45th globally. Even the newly launched PokerStars PA, serving a ring-fenced pool in the US state of Pennsylvania, averages eight times more cash game traffic than Run It Once.

Currently, RIO only spreads cash games while other game formats such as Sit & Gos and tournaments are expected to be added soon. The site is also preparing to launch mobile apps and is also presumably waiting for license approval in regulated European markets where the site has yet to offer.

With many of these still to come, Run It Once Poker’s traffic is expected to surge further as more players will join the site. However, time will tell whether it will ultimately prove successful or buckle under stiff competition.

Two months after Phil Galfond’s brainchild product, Run It Once Poker shut down to focus on making its way into…

Run It Once Poker USA: 8 Potential Paths for RIO to Enter US Regulated Online Poker Market

Run It Once Poker: Review and FAQ

Run It Once Poker, an offshoot of Phil Galfond’s Run It Once training site, launched in February 2019.

Run It Once Poker is currently offering one of the best welcome packages in the industry to new depositing players. In…

Run It Once Poker, the online poker site envisioned and created by Phil Galfond, is running a special promotion…