In its second year, the upstart online poker room made strides towards providing a unique and robust product offering.

The vision of an online poker site by Phil Galfond will turn two years old in 2021, and Run It Once Poker has released plenty of new features in the past twelve months. Furthermore, RIO has ramped up its promotions throughout the year and has seen a growth in the overall traffic.

We will take a look back at some of the more notable advancements for RIO in 2020, and then speculate on what we might see released this year.

The Galfond Challenges and a First Ambassador

A slate of generous promotions as part of the one-year anniversary brought the cash game traffic to levels not seen since the launch. At the same time, RIO founder Phil Galfond announced a Pot-Limit Omaha high stakes cash game challenge against VeniVidi1993.

Galfond was down by more than €900k but launched one of the greatest comebacks to come out on top in April 2020. The RIO founder subsequently accepted two further high stakes duels against Bill Perkins and Chance Kornuth.

In February 2020, Kevin Rabichow was announced as the first RIO ambassador. While no further ambassadors were revealed since, RIO continued the streamR program to reward players who stream their efforts on the site with additional rakeback of up to 100%.

Mid-way through the year in June 2020, RIO announced the launch of additional weekly promotions to reward their active cash game players. The first two “leadRboards” gave away €25,000 in cash game prizes split over seven separate leaderboards. 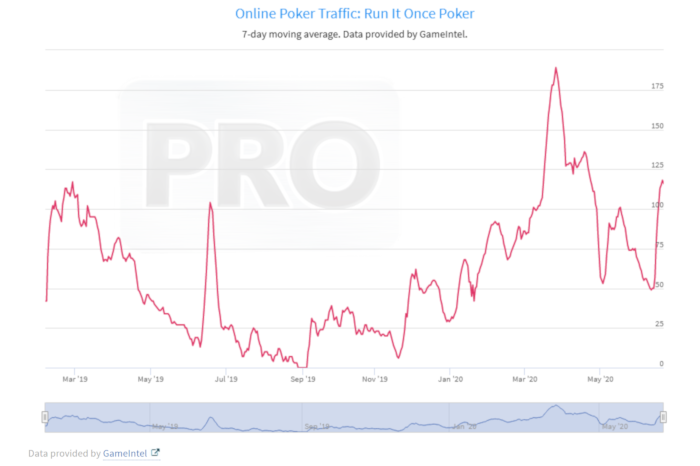 It came as no surprise that the seven-day average of concurrent cash game players more than doubled and peaked at 187 on June 15. That very day, Phil Galfond confirmed on Twitter that the site hit a new record for total hands played in a day.

We passed our previous high for # of hands played with 30 minutes to spare! Thanks for making it a memorable day in… https://t.co/oUN1×6i9Rf— Phil Galfond (@PhilGalfond) June 16, 2020

In August, the RIO client received several new features. The most interesting addition was the launch of the built-in HUD HeroIQ. Three major indicators for all players at the table are revealed including the VPIP (frequency of how often some one enters a pot), the PFR (preflop raise percentage); and how often they re-raise (3-bet).

The different player types were classified in the HUD and connected to the already existing dynamic avatars.

As far as visual improvements in the client are concerned, new features such as advanced window tiling, more table chat options and an all-in equity display were added.

RIO teased the implementation of an upcoming SNG format in October and once the testing was completed, the three-handed SNG Select came to life in the real money client early in November. Split into two options, it offers the Classic format with fixed payouts. In addition, an innovative lottery-style format dubbed Cub3d which also shares the liquidity of the entire SNG pool and provides several twists was introduced.

The Cub3d prize pool is randomized during the seating process and the first place prize is locked. Once the tournament is completed, the reward is only revealed to the winner. The top prize can be anything from two times the buy-in up to 1,500 times the buy-in, random “glitch prizes” to the runner-up or third-place finisher are also possible.

To celebrate the launch of SNG Select, RIO held a special 100k Cub3 Drop on November 12. A total of €100,000 in SNG tickets with bundles worth between €1 and €100 were awarded to all existing player accounts. All granted tickets were valid for seven days and new depositing players were also rewarded with €50 in SNG tickets thanks to the SNG Select Welcome Offer until the end of November.

RIO was among the operators to temporarily suspend players from Germany due to the regulatory developments as of October 15. However, German customers were notified by email on December 2 of the expected reopening which then took effect mid-way through the month.

All verified German accounts prior to the reopening were awarded a welcome back gift of free SNG Select ticket bundles and new depositing German players until the end of December were awarded €50 in tickets on top.

Leading up to the most-festive days of the year, RIO ran the 12 Days of Christmas promotion from December 14 to December 25. Each day a new reward was granted and an additional raffle awarded €5,000 in prizes.

With the implementation of the SNG Select and the unique Cub3d jackpot variant, RIO has taken another step forward to create more traffic. Once the liquidity allows, the SNG format may very well get expanded further than just three players on each table. SNG tickets have been launched already, and that functionality could be easily replicated for use with cash games and potentially MTTs.

The next logical step for RIO would be the launch of multi-table tournaments, which is certainly in the pipeline already. Site founder Phil Galfond described the plans as “distinct” and “innovative” in his featured blog posts on the RIO website.

Also, in the pipeline and something to watch out for in 2021, is the debut of the Run It Once mobile app which as per the operator remains to be high on their priority list. The operator says that it is working on implementing it but a public timeline is not yet available.

Along with MTTs and mobile app, we also speculate on other improvements that could be coming soon to Run It Once Poker including Run It Twice, Display Hand Strength, Stack Size in M and even the possibility of Lowball 2-7 Triple Draw poker variant to its game offerings.

Whether or not any further mixed games such as Short Deck or Triple Draw are considered remain to be seen. Galfond is a mixed game aficionado, but thus far, RIO only offers Hold’em and Omaha in their real money client.

As far as an expansion of promotions, an increase of the value on a weekly or monthly basis is always an option. RIO was very generous in late 2020 by giving away additional value during their celebration of the SNG Select launch as well as the 12 Days of Christmas promotion. A prime spot for a big promotion would certainly seem to be the second anniversary of the launch on February 6.

RSI & Run It Once Poker: is a US Online Poker Launch Still in the Cards?

For Rush Street Interactive (RSI), which acquired and onboarded the development team for Phil Galfond’s Run It…

Two months after Phil Galfond’s brainchild product, Run It Once Poker shut down to focus on making its way into…

Run It Once Poker USA: 8 Potential Paths for RIO to Enter US Regulated Online Poker Market

Run It Once Poker: Review and FAQ

Run It Once Poker, an offshoot of Phil Galfond’s Run It Once training site, launched in February 2019.

Run It Once Poker is currently offering one of the best welcome packages in the industry to new depositing players. In…