BetMGM Poker Michigan has released the full schedule of its inaugural Online Series. A total of ten tournaments are slated to commemorate the launch of BetMGM’s poker room in the Great Lake State.

The series has a total of $305,000 in guarantees for players of Michigan online poker. Commencing on Sunday, April 18, it will feature one daily tournament throughout the week, culminating in three tournaments on April 25, targeted small, medium and large bankrolls, respectively.

Of the ten tournaments, nine are No Limit Hold’em events while the other is given over to Pot Limit Omaha. Most of the contests have a standard format with unlimited re-entry periods but Events 2 and 6 are Progressive Knockouts (PKOs).

Free Seats up for Grabs

Daily satellites are running for all events, so even if some of the buy-ins are beyond one’s bankroll limits, there are still plenty of ways to qualify.

Most notably there are Opening Weeks Daily Freeroll Invitational tournaments, giving players the chance to qualify for no outlay whatsoever.

The freerolls run at 18:00 every day throughout the week and are open to 3500 runners. Each one has 15 prizes up for grabs, totally total prize money of over $1500.

A Healthy Dose of Competition

BetMGM Poker MI launched on March 22 and is only the second online poker room to go live in Michigan. Up until that point, PokerStars had enjoyed a de facto monopoly in the state.

The addition of a competitor can only be good news for poker players. Michigan is currently the second largest by population to allow regulated online poker and BetMGM is obviously keen to maximize its market share.

When PokerStars Michigan launched its MI poker room at the end of January, it also held a commemorative series, the Michigan Championship of Online Poker (MICOOP). The MICOOP exceeded all expectations, continually re-setting guarantees and eventually generating over $2 million in prize money.

BetMGM’s schedule is much smaller by comparison, with ten events as opposed MICOOP’s 60. Nevertheless, the eyes of the poker world will be watching closely to see if BetMGM can achieve anything like the numbers of its sole rival in the Wolverine State. 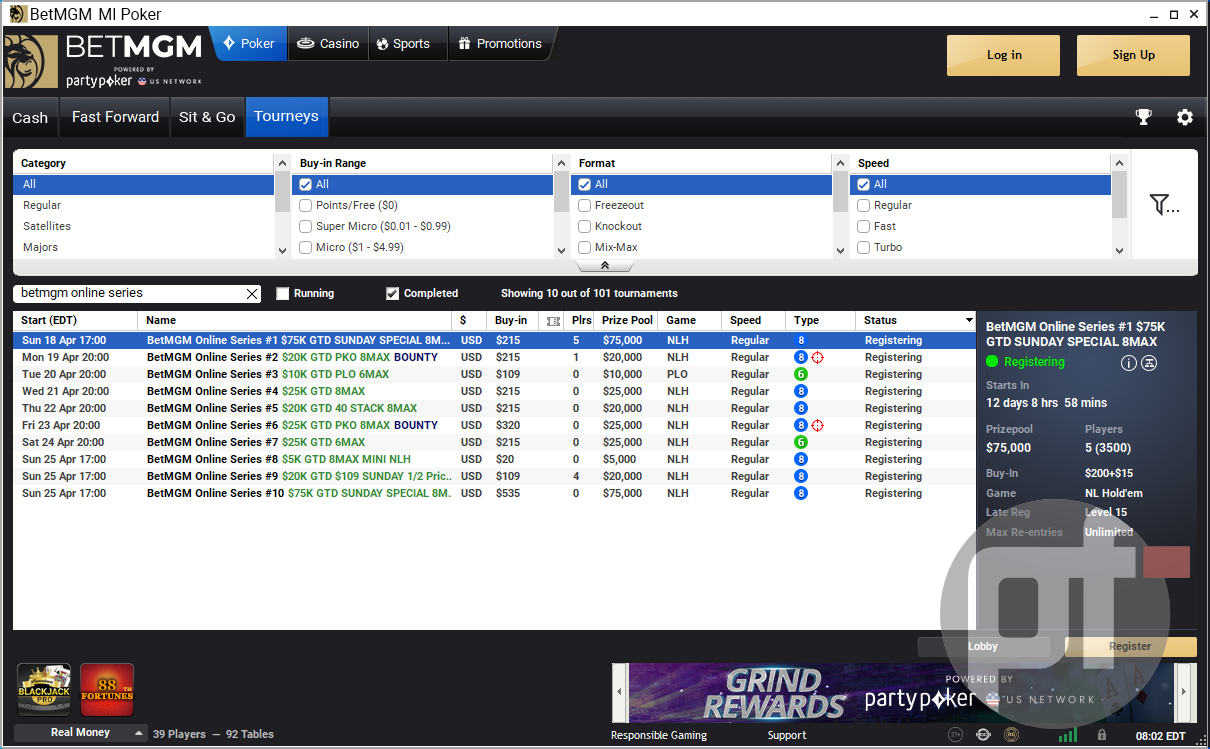 Pumping up the Publicity

The Online Series will come hot on the heels of BetMGM MI’s Grand Online Main Event, a one-off special tournament which takes place on Sunday April 11: A $109 buy-in event with a $100K guarantee.

That tournament will be a useful bellwether in ascertaining how well BetMGM’s opening series may go.

But the signs are—with all these guarantees and the plethora of freerolls on offer—BetMGM is doing all it can to drum up support for its fledgling poker room.

New Jersey was one of the earliest states to allow regulated online poker for real money. Along with five other poker…

The Wire Act and Online Poker: Where We Are and Where We’re Going

BetMGM Michigan Poker has further strengthened its presence in the regulated online gambling market, launching the…

BetMGM PA went live with its online casino just a few months ago, on December 1, 2020. In that short time the operator…