Soccer star scores a 55th place finish at the FPS High Roller in at the European Poker Tour in Monte Carlo.

The event was part of the ongoing European Poker Tour presented by Monte-Carlo Casino®, currently underway at the prestigious Monte-Carlo Sporting center. The event, with a buy-in of €2200, attracted 861 entries and 334 reentries to build a prize-pool north of €1.7 million.

Neymar managed to outlast 90% of the field, nabbing a 55th finishing position for a cash of €5620. The money is unlikely to be a big motivator for one of the world’s most successful sports stars, with an estimated net worth of some €200 million, but for a long-time poker fan who clearly loves the game, it will be a nice score on his profile. 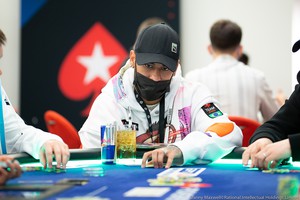 Indeed, it is his first recorded cash win at any EPT event and the first on European soil. His only other official score in the public database is from 2018, with a sixth-place finish at the PokerStars-sponsored Brazilian Series of Poker. His cash yesterday puts him 1,545th on the Brazilian all-time money list, according to The Hendon Mob database.

Neymar signed on as PokerStars’ Cultural Ambassador a year ago in a role that would involve “a series of creative projects inspired by the world of culture … from art and design to music and more,” it was stated at the time. Since the appointment, the online poker giant has run multiple promotions using his name, relaunched Spin and Goal, and rebranded an existing game to Neymar Jr Kick-Off.

Cultural projects include artistic collaborations with UK artists, which resulted in a special edition card deck.

Neymar seems to have a genuine love for the game of poker. His collaboration with PokerStars actually dates back a lot longer — his first partnership with the red spade dates back some seven years. He then rejoined in 2020 before adopting the cultural ambassador role a few months later.

While he now comes to some PokerStars events in this capacity, he has been spotted playing both live and online in a less official capacity. Late last year, he notably appeared on the live stream of PokerStars-sponsored live streamer Ben “Spraggy” Spragg — albeit very briefly.

It remains to be seen whether Neymar will play in any more EPT Monte Carlo events. He arrived on Saturday and played the €25k Single Day High-Roller (one event he sadly did not cash in). His entry into the FPS High Roller was something of a surprise for the PokerStars team, pokerfuse understands.

And there is certainly a lot of great action still to come. The EPT Main Event is currently underway, with a second Day 1 flight scheduled today. The €5k buy-in tournament attracted 419 entries in its Day 1A flight on Monday.

Other events that might pique his interest include a €50,000 unlimited re-entry and a €25k tomorrow, and the prestigious €25k buy-in EPT High Roller on Thursday. There are also high-stakes hyper-turbo knockouts every day.

On the lighter side, there are the €3,000 Mystery Bounty tournaments, €1k freezeouts, and a spread of other tournaments on the lower end.

Meanwhile, the Main Event will run its Day 2 tomorrow, Day 3 on Thursday, and Day 4 on Friday, playing down to a final table on Saturday.

The PokerStars TV live stream with cards-up coverage has just gotten underway. Coverage starts with the Super High Roller final table and then switches to the EPT Main Event through to its conclusion. As always, James Hartigan and Joe Stapleton are calling the action.