In yet another hint that BetMGM is preparing to launch online poker in Nevada, the operator has announced its first-ever BetMGM Poker Championship to be held at the ARIA Las Vegas next month.

The start of a new era of qualifying players online to major BetMGM Poker live events across the US BetMGM has announced the premiere BetMGM Poker Championship, a $1 million-guaranteed high stakes tournament to be held at the ARIA Resort & Casino next month.

The $3500 buy-in event will headline the 2022 ARIA Poker Classic. Other tournaments, including a $600 Mystery Bounty event, will fill a four-day period of BetMGM poker festivities to run from June 23 to 26.

This is yet more evidence that the operator, which is already live for online poker in three states, is preparing to launch BetMGM Poker Nevada soon — something that has been in the cards for many months.

What BetMGM and Ambassadors Say About the BetMGM Poker Championship

“The first-ever BetMGM Poker Championship descends on Las Vegas during one of the most exciting times of the poker season,” said Luke Staudenmaier, Director of Poker, BetMGM. 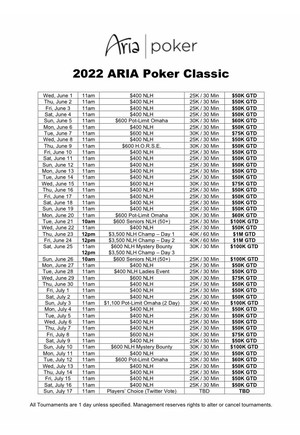 The ARIA Poker Classic runs from June 1 through to July 17, with almost 50 events spread over the six week period. Every tournament boasts a guarantee. It coincides with the competing World Series of Poker 2022, which runs over very similar dates.

“ARIA is a legendary poker brand and we’re thrilled that the Championship has become an integral part of this year’s Poker Classic,” Staudenmaier added. “Through our relationship with MGM Resorts and its world-class U.S. properties, we’ll continue to leverage event programming and connect with players both online and in their favorite poker rooms.”

“Excited to announce this event at [ARIA Las Vegas] this summer and the start of a new era of qualifying players online to major [BetMGM Poker] live events across the US,” stated BetMGM ambassador Darren Elias on Twitter.

The tournament itself had actually already been announced. Tournament Poker Manager Paul Campbell tweeted the full schedule of the ARIA Poker Classic back in April and headlining that was a $3.5k buy-in “NLH Championship,” with two Day 1s.

The $600 Mystery Bounty, to run on Saturday, June 25, was also already revealed. According to April’s sheet, this will boast a $100,000 guarantee. Both have now presumably been rebranded as BetMGM events.

Excited to announce this event at @AriaLV this summer and the start of a new era of qualifying players online to ma… https://t.co/EyHrHJ2K4e— Darren Elias (@DarrenElias) May 05, 2022

pokerfuse has been speculating for some time that BetMGM plans to launch online poker in Nevada. This week’s announcement is further supporting evidence.

In March, we reported that there were multiple signals that the operator was preparing to finally go live, including hiring a new Senior Manager of Poker Marketing in Nevada — a role requiring “a thorough understanding of and experience with online poker,” USGR also reported at the time.

A year ago, the operator received a three-year extension to its interactive gaming license in Nevada, a requisite for an online poker launch in the state.

While Nevada is a small market, the multi-state online poker agreement (MSIGA) allows operators licensing in New Jersey to combine liquidity. Michigan was recently invited to join the pact, and is expected to sign on soon.

This would allow BetMGM to connect its Michigan, New Jersey, and new Nevada sites together, meaning it could go toe-to-toe with rival WSOP with a tri-state online poker network.

The operator and regulators remain tight-lipped about this plan, but the fact that BetMGM is hosting its first Poker Championships in Las Vegas, rather than New Jersey, is a strong signal that it sees a future for online poker in the state.

What’s new in this week’s announcement is BetMGM’s association with the tournaments, the announcement of the BetMGM Poker Championship brand — and its plans to run a major online satellite campaign across all its online poker rooms.

In what BetMGM calls an “omnichannel event,” it is offering players in Michigan, Pennsylvania, and New Jersey a chance to play in the high stakes tournament. According to the operator, it is only the second such multi-state coordinated promotion involving a BetMGM Resorts property ) the first being March Poker Mania).

Starting this Sunday, May 8, and running through to June 12, daily mega-qualifiers offer players the chance to win their way to the BetMGM Poker Championship starting at just $5. These guarantee tickets to a $20 step; these lead to a $100 “Round 3” that in turn lead to a $500 Final.

These will guarantee multiple seats to the Championship tournament in Las Vegas. Each package is valued at $6000 and includes the $3500 buy-in, cash towards travel expenses, and a free stay at the ARIA. Qualifiers also gain entry to a $25K freeroll, to be hosted by ambassadors Darren Elias and Matt Berkey.

The first two rounds are hosted daily; round three is hosted four times a week. A player can start at Round 1 and work their way through, or buy into any step they choose.

Those who make it through round three win a $500 ticket to a Final Round. There is one scheduled every Sunday from May 15 to June 12, inclusive, and each will award multiple packages.

Not signed up yet? BetMGM is running some great deals for new players. Check out pokerfuse’s comprehensive review to learn more and grab the latest BetMGM Poker Promo Code »