Here is the exclusive first glimpse of PokerStars Ontario software and what the operator has in store for poker players in Canada’s largest province.

In many respects, Ontario is our home market, given the first-ever hand of PokerStars was played here over 20 years ago, so we are thrilled about the new regulated environment within which our players can play, PokerStars Ontario will be going live in the province’s regulated gaming market on June 28, the operator announced today.

Until now, the operator had been accepting players from Ontario under its offshore license, but, starting tomorrow, this will all change, and the room will be operating under its new license, which it secured some three weeks ago.

Since regulations in the province require the poker player pool to be segregated from the rest of the world, the PokerStars ON poker room will be ring-fenced and open to Ontario players only.

PokerStars Ontario — What We Know So Far:

It will be only the third legal and regulated online poker network to operate in the province after 888poker Ontario and the BetMGM Poker Ontario Network — both of which have been running their Ontario segregated poker rooms since early April.

The operator announced in a blog post that all the existing PokerStars players in Ontario will be redirected to the new Ontario-exclusive room once they log in. Players must complete the five-step migration process before they can start playing real-money games.

“In many respects, Ontario is our home market, given the first-ever hand of PokerStars was played here over 20 years ago, so we are thrilled about the new regulated environment within which our players can play,” said Tom Warren, MD — Marketing at PokerStars in a blog post. “A lot has changed in that time, but our commitment to offering our players the most epic and thrilling experience in the market hasn’t — and we can’t wait to get started.”

A First Look at PokerStars Ontario: What to Expect.

With the most anticipated launch in Ontario just one day away, pokerfuse got a sneak peek behind the scenes of what Ontario players can expect to see when the room goes live.

The PokerStars ON poker software will be the same as the dot-com market, except players will notice a few cosmetic tweaks, such as the Canadian flag emblazoned across the lobby and the logos of Ontario’s regulators AGCO and iGO visible at the bottom of the lobby.

Apart from that, players will have a pretty similar experience. As the player pool will be segregated from the rest of the world, the game offerings would be limited compared to what had been previously offered. The games will be denominated in Canadian Dollars. 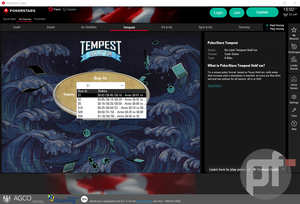 However, Ontario players will still have broad access to game options, including Spin & Go’s, Zoom, 6+ Hold 'em, as well as the operator’s novelty variant Tempest Hold 'em along with the standard cash games, sit and go’s, and tournaments.

All of these games will be available in 6-handed only, and there will be no full-ring tables, pokerfuse can reveal.

Sit & Go’s will also be available per the software gleaned by pokerfuse with buy-ins starting at CAD $0.50 and going up to CAD $200. Meanwhile, Spin & Go’s will be offered in seven different buy-ins from CAD $1 to CAD $100 — with each of the buy-ins also supporting the Flash version. 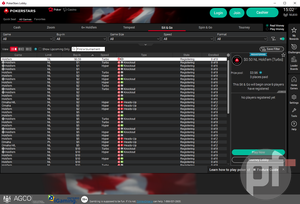 No tournaments have been deployed on the test client seen by pokerfuse but the operator has teased a $100,000 guaranteed Sunday major tournament that will be debuting soon.

The operator has also unveiled it will be running a $1.5 million guaranteed Ontario Platinum Series to mark its launch in Canada’s largest province. It will run from July 10 to 18 and will only be open to Ontario players.

An Ontario Championship of Online Poker (ONCOOP) series is also in the pipeline and is set to guarantee $2 million.

PokerStars Ontario will be the third regulated online poker network to go live in the province. WSOP through its partnership with GGPoker is also expected to follow suit — though the operator has yet to announce any dates for its Ontario-exclusive poker room.

Since its launch in early April, the newly regulated Ontario online poker market has gone from strength to strength. In…

The aptly named Fall Fest series has made its way up north, with its next iteration running in the real money Ontario…

Just days after PokerStars debuted the Online Championship series for Ontario players, the room has deployed a new…

PokerStars Ontario hit its highest level in cash game activity despite a newcomer joining the province, pokerfuse can…