PokerStars Ontario is one of the leading licensed and regulated online poker rooms available in Ontario.

PokerStars Ontario offers a full slate of online tournaments and real money cash games to players in the province across various stakes and features the best selection of different game types.

Players can enjoy all the benefits of the operator’s top-quality software and mobile app, taking advantage of the safe, stable, and visually impressive platform powered by the unique graphics engine.

PokerStars Ontario is finally live, providing another fully licensed and regulated real money Ontario online poker room available to players in the province. The operator took its time and did not launch early on with the likes of BetMGM Poker Ontario, partypoker Ontario, and 888poker Ontario, holding off and going live on June 28 instead — nearly three months after the market opened.

Having waited until the right moment, PokerStars Ontario is now live, offering its top-notch desktop software and mobile apps, which give it a powerful starting position.

PokerStars is one of the world’s biggest providers of online poker services, with a license to operate in more than 20 different legal jurisdictions and several platforms already launched across the US. So, acquiring the Ontario license is a natural next step for the operator.

Like the rest of the regulated operators, the player pool of PS Ontario will be segregated to start with, which means players will only be able to compete against other players from Ontario, with a potential for a future expansion.

Keep reading this PokerStars Ontario Review to find out what you can expect from the operator, including available games, banking options, and more. 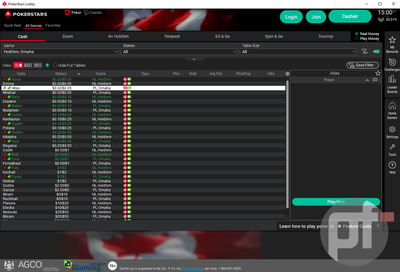 If there is one thing that PokerStars is known for, it is their impressive daily and weekly tournament schedule, and this is true in every market in which they operate.

One of the most significant upsides of PokerStars is that they offer tournaments in poker games other than No-Limit Hold 'em, with a variety of Omaha, Stud, 8-Game, and other tournaments on the schedule.

The player pool in Ontario is somewhat limited right now, so we may not see as many mixed-game tournaments. Still, the operator offers a variety of freezeout, rebuy, knockout, progressive knockout, Zoom, and other games throughout the day.

With stakes ranging from freerolls all the way up to CAD $525 and higher, players of all calibers have something to look forward to in the PokerStars Ontario tournament lobby.

To celebrate the launch of PokerStars Ontario, the operator ran Ontario Platinum Series from July 10 – 18, awarding CAD $1 million in guaranteed prizes across 90 events. The series featured a wide range of buy-ins, from just $5 all the way up to $1000. The $300 Main Event offered a guarantee of $200,000.

Although the Ontario Platinum Series saw overlays in a few dozen events, it was an overall success for the operator. The Main Event saw a significant overlay with 552 entries in total.

Right out of the gate, PokerStars has announced plans for the Ontario Championship of Online Poker (ONCOOP), continuing the tradition of hosting online championship events in every market it operates in.

The details about the series are still scarce, but PokerStars Ontario has stated that the goal for the overall prize pool is CAD $2,000,000, so tournament players have a lot to look forward to.

The daily tournament schedule at PokerStars has always been impressive, and the various Big and Hot tournaments have been staples on it for a long time.

Big tournaments feature a deep and slow tournament structure with various buy-ins ranging from just CAD $2.20 and up to CAD $109.

On the other hand, Hot tournaments are turbo games that end pretty quickly but still reward generous prize pools with a similar variety of buy-ins.

These games may not get as many players on the Ontario site as they do at international PokerStars, but they represent an essential part of the daily tournament schedule.

Ontario players participate in an event named New Sunday Majors. This is the operator’s flagship event in the province with a respectable guarantee of CAD $100,000.

Back in the day, SNG tournaments were the staple of PokerStars, with countless players competing at all levels and in all formats of these famous tournaments.

Today, the popularity of SNGs has diminished. However, players at PokerStars Ontario can still quickly jump into an SNG of their choice and get the game started as soon as enough players have registered.

A particularly popular form of SNGs these days is Spin & Go tournaments, which offer rewards up to 10,000x your buy-in while competing against just two other players.

These jackpot SNGs may not be the most convenient form of poker to grind regularly but are certainly an enjoyable and exciting type of poker game to jump into for some quick fun and potentially a nice bankroll boost. 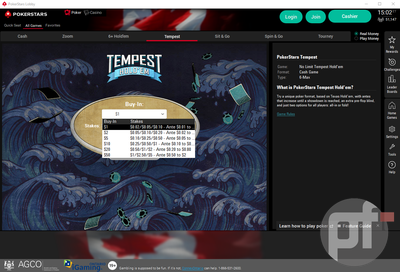 While tournaments may be the place to turn a small buy-in into a big first-place prize, it is the cash game tables that keep bringing players to PokerStars daily where they can duke it out for hours on end.

The range of PokerStars Ontario real money cash game tables is quite impressive, although not as extensive as what is available on the international site. You can play No-Limit Hold 'em, Pot-Limit Omaha, 6+ Hold 'em, and the unique Tempest format. Other poker variations are offered on occasion, but only in tournaments.

Heads-up, six-max, and full ring tables are available, with stakes ranging from just CAD $0.02/0.05 up to CAD $50/100, although the highest stakes games are not too likely to run regularly.

Still, you can expect to find plenty of action at the CAD $1/2 tables and lower, which means plenty of fun real money cash game action is guaranteed.

The Zoom tables are also available at PokerStars Ontario, but it remains to be seen if enough active players will be available to make these games run on the regular.

The PokerStars online poker platform has been one of the very best in the world for many years now, and it continues to be so with the operator constantly updating and upgrading the platform to stay on par with the evolving technologies.

Today, players at PokerStars Ontario can be sure that they will experience online poker for all it can be with one of the most complete and most attractive poker platforms available.

From a strictly technical point of view, the PokerStars platform is sensational. Players can download the online poker platform on their desktop computers and iOS and Android-powered mobile devices and experience the same quality level they have grown accustomed to on each device.

The PokerStars Ontario platform is very well-designed and offers many different functionalities. Players can use lobby filters to quickly and effectively find the game types they are looking for or even locate the particular game they want to find by name.

PokerStars has been granted an operating license by the Alcohol and Gaming Commission of Ontario (AGCO), and iGaming Ontario (iGO), which means the operator is in full compliance with the standards imposed by the regulator and offers a fair and safe gaming environment.

Not only is PokerStars Ontario legal and safe to play on, but the actual platform is one of the most stable ones in the world, with problems like disconnects or system crashes rare and far between.

On top of that, PokerStars has always been known as an operator that takes care of its players, which means that any technical difficulties caused by the operator are always compensated for and taken care of. 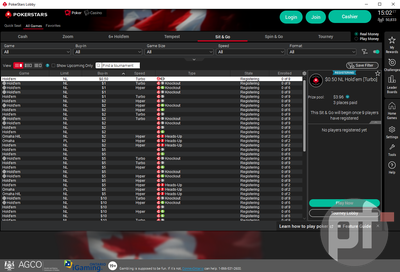 We finally reach one of the aspects of operation in which PokerStars truly excels, and that’s appearance. Both the lobby and the actual tables at PokerStars look spectacular, all powered by the operator’s Aurora graphics engine.

Players get to pick from various table themes, card and chip designs, and many other elements. Four-color decks, unique avatars, interchangeable seating positions, and much more make PokerStars one of the most graphically appealing pieces of online gambling software in the poker industry and beyond.

Is PokerStars legal in Ontario?

Yes! PokerStars was one of the first online poker operators to be granted an operating license in Ontario. This means PokerStars can legally offer online poker games to those in the province, receive deposits from local players, and pay out winnings entirely within the confines of the law.

Who can play at PokerStars Ontario?

To play real money poker at PokerStars Ontario, you must be an adult (21 years old). You will need to create a PokerStars account, providing all personal information you are asked for and being able to verify them with copies of real-world documents.

Do I have to be in Ontario to play?

Yes! Like the various poker rooms in the regulated poker markets in the US, PokerStars Ontario only allows players who are physically within the province of Ontario to play real money games.

Does PokerStars Ontario share liquidity with any other areas?

No! At this time, players at PokerStars Ontario can only play within their player pool, which is fully discrete from all other jurisdictions. This means every player at the tables will be a Canadian player playing from within Ontario for the time being.

Find out why PokerStars is our top pick for all Ontario online poker players, from hardcore grinders to recreational players looking to have fun.

The aptly named Fall Fest will run on PokerStars Ontario from November 19 – 28 with $550,000 in prize money up for grabs.

A new line-up of tournaments is being offered to Ontario online poker players as PokerStars upgrades its daily & weekly MTT schedule.

WSOP’s launch in Ontario has not hindered PokerStars’ growth as it reaches its highest point since its launch in late June.

WSOP Ontario, powered by GGPoker, snatches the lead from PokerStars as the market grows to nearly 750 concurrent seats — larger than any US online poker market, pokerfuse can exclusively reveal.

The PokerStars ambassador and Ontario native crushes the inaugural ONCOOP series taking down five titles for a total payout of nearly $17,000. And there’s still five days to go.