This November, players in PokerStars’ US jurisdictions — MI, NJ, PA — will have six chances to win a Platinum Pass to the PSPC returning to the Bahamas in January.

It has been a few years, but the biggest $25k game in history is back on the poker schedule for early 2023, and PokerStars US is looking to send some players to the big game. There are six Platinum Passes to the PokerStars Players Championship (PSPC) — running in January as part of the PokerStars Caribbean Adventure (PCA) — available for real money US online poker players in November.

When the PSPC ran for the first time in 2019, it turned into the biggest $25k buy-in in history. In part, that resulted from the massive push for Platinum Passes that PokerStars undertook in the lead-up to the event, sending over 300 players to the big event for a fraction of the sizeable buy-in.

The final total for the first PSPC was over 1000 entries and over $26 million in prizes. While the COVID pandemic postponed the tournament’s second edition, the return this coming January promises to be just as big as the OG. To help hit those numbers, PokerStars is again making a big push on Platinum Passes, and US players have a shot at six of them over November.

All three jurisdictions that PokerStars US operates in will have chances at passes through two different promotions. Players in PA, NJ, or MI will have a shot at Passes through the upcoming Fall Fest series and the Golden Ticket Freeroll promotion. 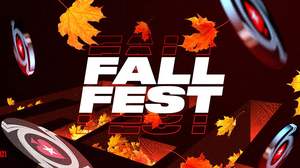 One way US players on PokerStars have a shot at a Platinum Pass is by crushing the upcoming Fall Fest poker series running in all three of US jurisdictions. There will be nearly $2 million guaranteed across the three states, and high-performing players can get an extra prize with a special freeroll for top finishers in the leaderboards of each state.

This is the second edition of the PokerStars Fall Fest series, with the 2021 version hitting some solid numbers. The Fall Fest action kicks off on November 11 and runs through November 28, with events starting at $5.

While there will be lots of value on the tables during the series itself, with almost $2 million guaranteed in the three US states PokerStars operates in, there is some extra value on offer for players who put up a solid showing on the leaderboards. Select players from each state will qualify for tickets to a special freeroll with a Platinum Pass up for grabs.

For qualifying players, the Platinum Pass freeroll runs on November 29 in all three states. The full schedule for Fall Fest should be published by PokerStars shortly.

The other chance for US players to grab a Platinum Pass in November comes in the form of Golden Ticket freerolls. There is one ticket on offer in each of the three states PokerStars operates in, and it is very easy to get involved.

By completing those two steps, players will receive a chest with a mystery prize, which could include a chance at a Golden Ticket for a special freeroll on November 8. Players can opt-in daily until November 7, 2022, to be in with the chance to win a freeroll ticket.

The long-awaited second running of the PSPC is now just weeks away, but there are still chances to get into the massive game for cheap. This month, six US players will book their tickets to the PSPC in January — log on to PokerStars US for a chance to win.

Not signed up yet? Check for the latest PokerStars US Promo Code and get in on the action.

Which State is Next for US Online Poker? Part III: Kentucky

It has been a few years, but the biggest $25k game in history is back on the poker schedule for early 2023, and…

Does FanDuel’s Return to Nevada Mean PokerStars Can Go Back, Too?

It’s been over 11 years since PokerStars, in the wake of what came to be known as Black Friday, was forced to…