Online poker attracted 53% more players In March 2020 compared to the year before.

The UK Gambling Commission (UKGC) has released data analyzing gambling habits during the lockdown in the UK that was created by the global coronavirus pandemic.

The lockdown in the UK took place between March and May 2020, as the population were forced to keep their distance from others and stay indoors, as the country ground to a halt.

During that time, the UKGC polled players via “the biggest operators, covering approximately 80% of the online gambling market.” And the data that has been collected is revealing.

Notably, figures show the amount of active players during that period was actually lower year-over-year, down 2%. However, the stats go on to show that active players in different verticals (this was anything from casino, online poker, betting) actually grew.

The data from the UKGC shows that bets place on online poker games for the month of March was up 38% compared to the same period last year. Virtual betting saw the biggest amount of bets placed year-over-year up 40%. Slot sites saw growth of 16%.

Online poker attracted 53% more players in March 2020 than it had the year before. In April it saw its biggest month with 626,304 players turning to online poker games. This growing demand for games on the online poker sites in turn saw operators scramble to start offering home games as well as juicy tournaments series and overhauled MTT schedules.

Poker Industry PRO estimates that although traffic is returning to pre-pandemic levels, online poker is still up 25% thanks to the captive audience created by Covid-19. 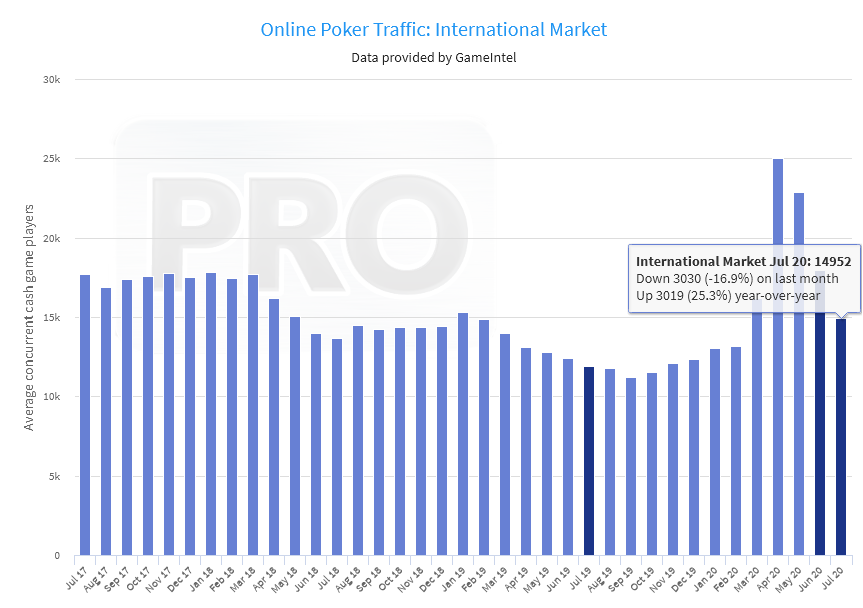 Over $800 million was paid out via online tournament series alone during lockdown thanks to: partypoker’s flagship Powerfest series, which was extended multiple times; GGPoker’s jaw-dropping $100 million 2020 WSOP Super Circuit Series and PokerStars SCOOP that guaranteed $135 million from the original $85 million, all setting records.

Currently operators are still fighting over players as an audacious summer of tournament series is underway, with another $200 million guaranteed to players.

Operators have perhaps overstretched themselves though as partypoker’s WPT World Championships and PokerStars’ Stadium Series have been plagued with overlays. $2 million in overlays between the pair was reported in their first weeks of action.

The World Online Championships has a way to go as it doesn’t wrap up until early September.

GGPoker is also running its WSOP 2020 bracelet events with the first week of action generating $21 million in prize money and nine bracelets.

Partypoker has upgraded its declaration on how it says it protects customer deposits, stating that it has taken steps…

This week, the topic of player funds protection at online poker sites was once again in the spotlight. It is a topic…

On Monday, gambling regulators from more than a dozen countries and one US state including the United Kingdom Gambling…