PokerStars PA beats out PokerStars NJ for the most revenue in the US during a single month.

Pennsylvania online poker now holds the record for the most revenue generated in a regulated US market after the Pennsylvania Gaming Control Board reported on Monday that PokerStars PA brought in nearly $5.3 million during the month of April.

The sudden surge in the popularity of online poker occurred as most of the world’s population was ordered to stay at home to mitigate the spread of Covid-19, creating a massive surge in traffic on the latest PokerStars USA site.

According to online poker traffic statistics tracked by GameIntel and available exclusively on the Poker Industry PRO Data platform, the 7-day moving average of cash game traffic in Pennsylvania has began decreasing from its high point in late April.

The current average of 731 concurrent cash game seats occupied matches a level last seen two months ago in the last week of March. 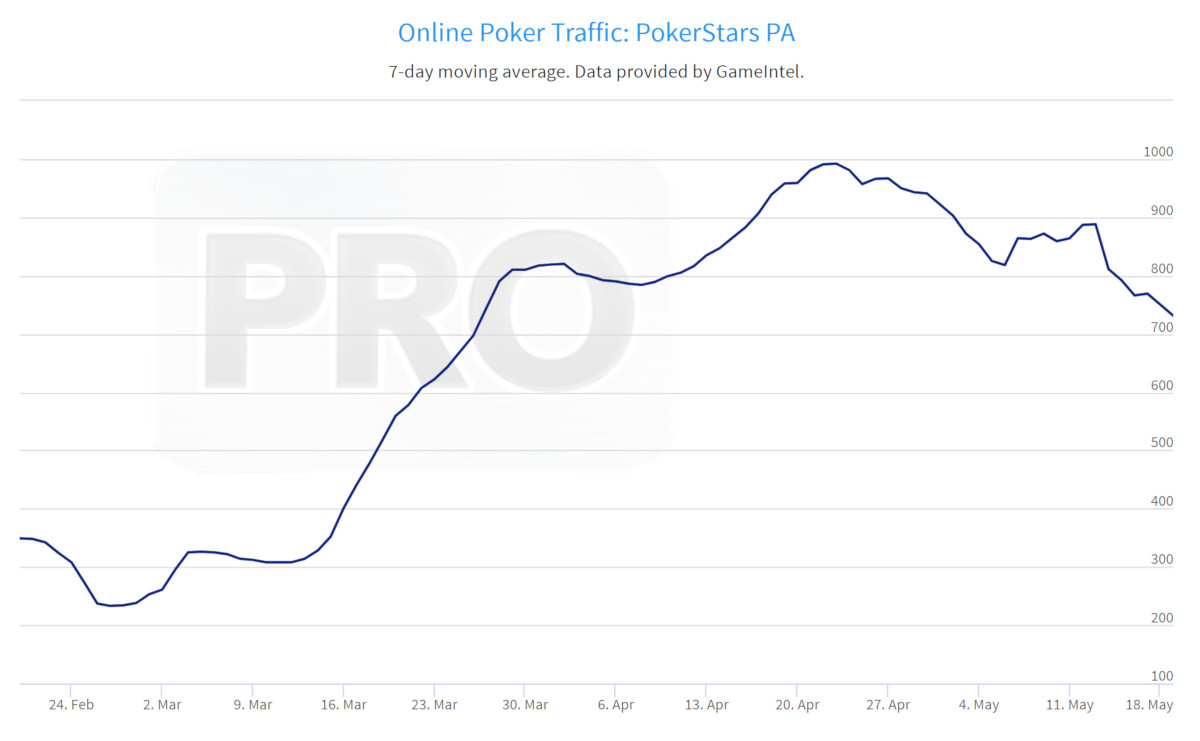 The decrease could be a result of some of the counties in Pennsylvania easing their stay-at-home restrictions. Governor Tom Wolf began lifting the confinement orders earlier this month in phases. The counties with the highest infection rates are scheduled to have their lockdown in place until June 4.

However, another possible reason for the dip in traffic in May could be the lack of a headlining tournament series during the month.

Instead, PokerStars PA did launch the largest single online poker tournament in the history of Pennsylvania.

Pennsyl-MANIA ran in mid-May and promised to pay out at least $250,000 for a $200 buy-in. The tournament was a huge success, smashing its guarantee and amassing a total prize pool of $515,964, more than double its guarantee.

Given the level of success for Pennsyl-MANIA, it is quite possible that the Pennsylvania online poker market could have successfully supported another tournament series in May and PokerStars PA may have left its customers wanting more.

The Best Months for US Regulated Online Poker

In just seven months of operation, Pennsylvania has notched two of the top 10 months of all-time ranked by amount of revenue collected – both occurring since the outbreak of Covid – in spite of the fact that it only has one online poker room.

Last month pokerfuse reported that the World Series of Poker was on deck to become the second operator to offer online poker in Pennsylvania.

At the time, a representative from the Pennsylvania Gaming Control Board (PGCB) told pokerfuse that the approval of 888, which will provide the online poker platform for WSOP PA, is still required before Pennsylvania will get another online poker room.

“888 is currently in background with our investigative unit, PGCB Communications Director Doug Harbach told pokerfuse. “I do not know the timetable on when that applicant will be ripe for approval by the board, but that must occur before WSOP can be launched on the Caesars site.”

Harbach added that a WSOP launch is “likely when the 888 platform is ready to go.”

888 is one of the most regulated online poker providers in the world with operations already live in New Jersey, Nevada and Delaware. As a result, the approval process by the PGCB is expected to proceed without issue.

With MI Greenlit, Will PA Be Next to Join US Online Poker Compact?

With Michigan being invited to join the Multi-State Internet Gaming Agreement (MSIGA) this week, all eyes are now…

March Poker Mania is coming to BetMGM Poker USA this month giving players an amazing chance to compete against the pros.

Regulated PA online poker room World Series of Poker (WSOP PA), is soaring. Thanks to a combination of lobby changes,...