May 2020 ranks third for all regulated online poker markets in the US.

Pennsylvania online poker had another big month in May with the state’s lone online poker operator, PokerStars PA, collecting $4.6 million in rake and tournament fees according to figures released this week by the Pennsylvania Gaming Control Board.

However, the $4.6 million collected in Pennsylvania during May 2020 ranks third all-time across all regulated markets with only April 2020 in Pennsylvania and New Jersey performing better. All online poker operators in New Jersey combined to generate $4.5 million (4th all-time) last month.

Online poker cash game traffic in Pennsylvania has returned to pre-lockdown levels, according to online poker traffic statistics tracked by GameIntel and available exclusively on the Poker Industry PRO Data platform and was largely in steady decline throughout the month of May.

The 7-day moving average was calculated at 502 concurrent seats filled on June 17 with the market having peaked at 992 on April 23. The decline comes at a time when there hasn’t been an online poker tournament series in the state, while operators in other markets have expanded their tournament series offerings to cater to the players confined to their homes during the COVID-19 pandemic.

PASCOOP, the last tournament series to run in the market, ended on April 20 which just happens to coincide with the decline in traffic in Pennsylvania. 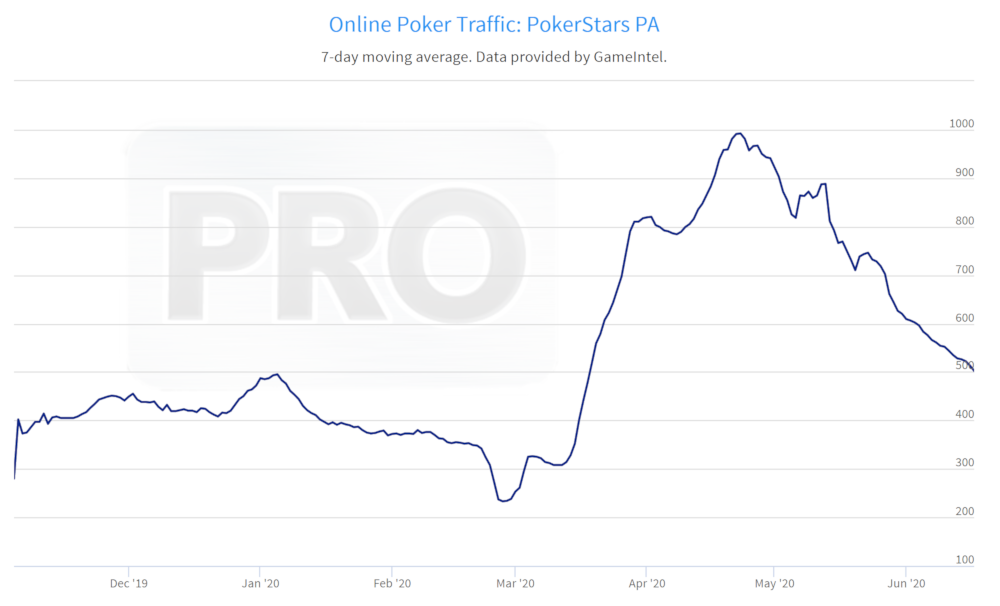 In May, PokerStars PA did run a special one-off tournament, Pennsyl-MANIA, which had a $250,000 guarantee for a $200 buy-in, the largest guarantee for an online poker tournament in the state. The tournament was so successful that it more than doubled its guarantee, paying out $515,964 in prize money.

And while the month of June has traditionally been a declining month in the global online poker market, PokerStars PA is hosting its Summer Series in Pennsylvania from June 18 – 28.

As mentioned, the only online poker room operating in Pennsylvania currently is PokerStars PA, but that could change soon.

WSOP.com, the online poker room that combines its players in New Jersey and Nevada (along with online poker players in Delaware that play on racino-branded sites operating on the 888 platform), is expected to launch in Pennsylvania this year.

According to the PGCB, WSOP’s online poker platform provider (888) is currently in the testing phase of it application with the regulator, and it is understood that the approval of 888 is the final hurdle before WSOP PA provides competition in the market which should benefit online poker players in the state.