Guarantees Increased at PokerStars Michigan This Weekend, with $20,000 Sunday Special Added to Schedule

Your guide to almost $40,000 in guaranteed prize money across the Sunday Majors this weekend at PokerStars MI.

PokerStars is live for online poker in Michigan offering real-money poker games for everyone residing within state lines. Currently, PokerStars is the only operator offering internet poker in the state.

After a successful first few days of operation—the site attracted more than 2000 players at its peak—we are taking a closer look at what PokerStars MI is laying on this weekend, where guarantees have been increased across the board and a big new standout tournament, the Sunday Special, is on offer.

The operator also provides sports betting via Fox Bet and online casino games via Stars Casino, competing with many other operators in the nascent Michigan online gaming market.

However, no one else has readied their online poker product as of yet, so it is the only site that can offer all three. And it is doing everything it can to attract players to the tables, with bumper guarantees, promotions and freerolls. This weekend will be its biggest yet.

In total $39,500 is guaranteed across five PokerStars MI tournaments this Sunday. A strong spread of Sunday Majors makes up the schedule with satellites to each running on Saturday from as little as $5.

Here’s what to look out for this coming Sunday, February 7. 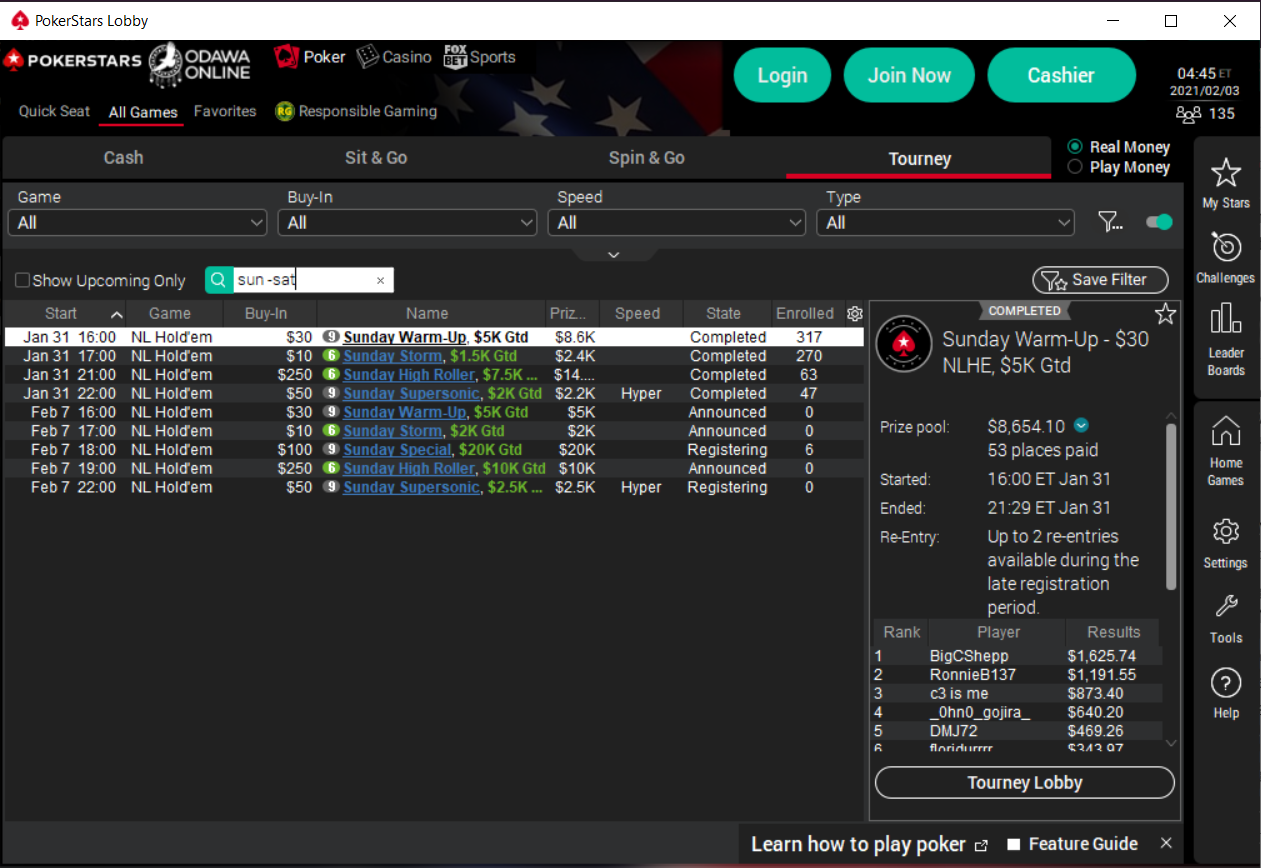 Thanks to such a high turnout last weekend, PokerStars MI has been able to increase most of the guarantees on their Sunday tournaments.

The Sunday High Roller has increased its guarantee from $7,500 to $10,000 this weekend due to the high turnout on its debut. This should be fairly easy for the operator to cover—it hit almost $15,000 in prize money on its opening weekend.

But probably the real head turner here is the new Sunday Special. Like in New Jersey and Pennsylvania, this will be the operator’s weekly flagship, which did not launch with the other tournaments last Sunday. It makes its debut this weekend.

Also running until February 7 is the PokerStars MI Celebratory Launch Freerolls where $50,000 in prize money is up for grabs, as part of PokerStars’ promotional push into the new market.

All real money players with verified PokerStars MI accounts are welcome to join as many freerolls as they like. The freerolls are awarding between $2500 to $7500 each day until Sunday.

Welcome bonuses are also on offer, worth $30 to players who make a minimum deposit of $20 using the code FREE30.

Beyond cash games, Spin & Gos are available in Michigan along with Turbo and Hyper SNGs.

An online tournament series is also expected soon: a Michigan Championship of Online Poker is hopefully on the cards in the near future.

The operator has remained tight lipped on whether this will happen, with some speculation they might roll out a Winter Series first. Successful series have wrapped up in neighboring markets of New Jersey and Pennsylvania.

Pokerfuse will be bringing you the latest, so check back regularly to see what developments are happening in the state.

If you have questions, check out pokerfuse’s frequently asked questions on PokerStars Michigan, which explains the available bonuses and promotions, how to sign up, and a whole lot more.

PokerStars Teams Up with Detroit Red Wings to Skate Past Rivals