First quarter numbers are in for Michigan, and PokerStars hold lead against BetMGM.

Michigan online poker is the new battleground in the United States. The segregated market now has two competitors, and it remains an open question who will emerge on top.

The market has barely been live for two months, and it has only been had two operators in it for less than two weeks. But early numbers do show PokerStars MI has had no issues holding onto its lead they acquired by being first in the game.

Now, rival BetMGM Poker MI has entered the fray with the first competition in Michigan for the global poker behemoth. Operating on partypoker software, BetMGM started offering poker services to Wolverine State residents in late March, breaking the effective state monopoly held by PokerStars for most of 2021 Q1.

PokerStars was the first player to sit down at the table in Michigan, and right out of the gate, they used their monopoly to put up solid numbers in cash game traffic. The operator started off strong, averaging more than 300 concurrent cash players during their first days of operation.

Those numbers did nothing but grow initially. After a few days of stable numbers slightly above 300, traffic surged on the site to a height of over 500 concurrent players in mid February.

They held over 500 players for more than a week before starting to drop modestly. Concurrent cash players remained above 400 for the remainder of the quarter, ending the first quarter with 417 concurrent users on March 31. 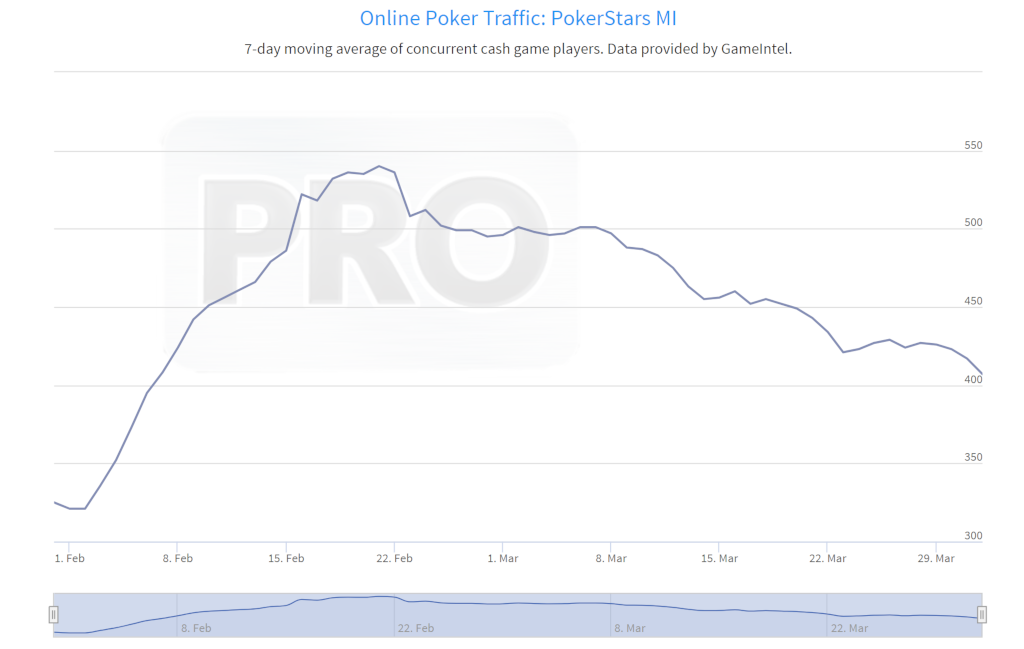 As a result of the late launch, there is limited data available for BetMGM, with barely a week of cash game data tracked. Early numbers show a slow start for the new site, though there has been steady growth since launching.

With 11 days of data at the end of the first quarter of 2021, BetMGM’s numbers remain under 100 concurrent players. However, over the course of the first week of operation, the cash game traffic doubled, and showed a clear upward trend. 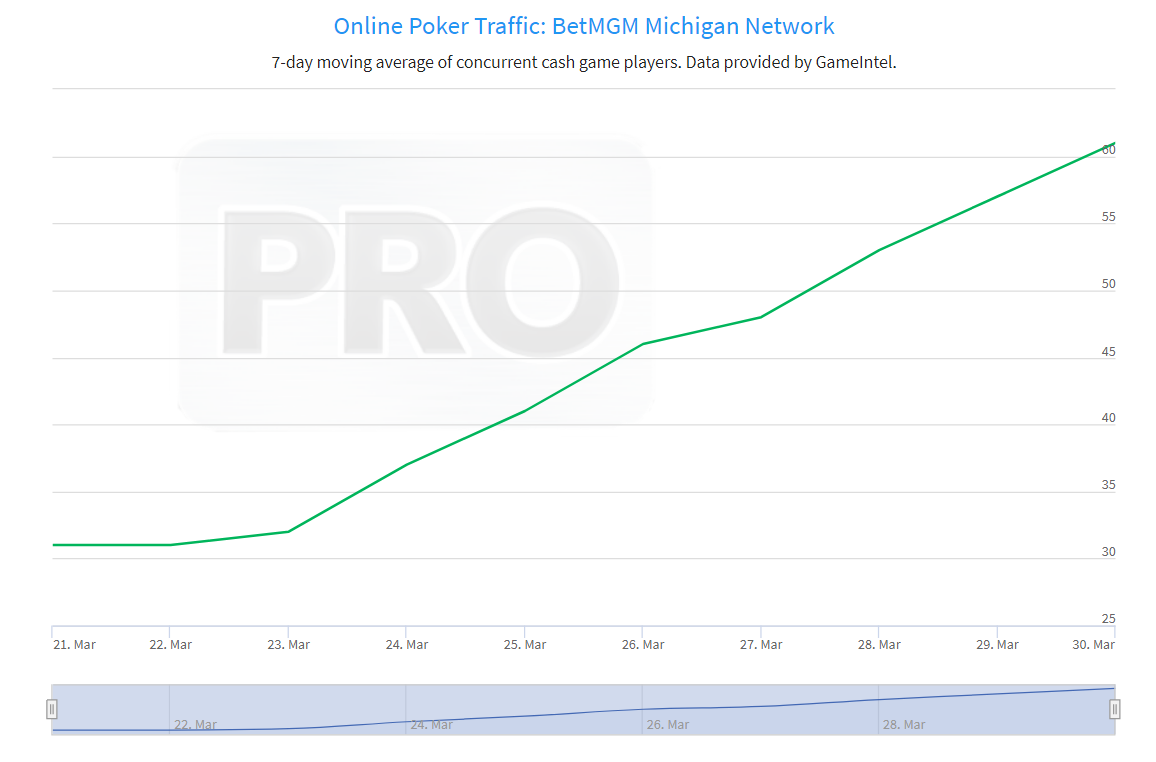 The biggest open question for now is how the two operators will stack up against each other in tournaments. Once again, as the operator with the first-mover advantage, PokerStars Michigan has a distinct advantage.

They came out of the gate with the Michigan Championship of Online Poker (MICOOP) and the response was huge. The first weekend of action saw PokerStars’ original guarantees crushed by a huge turnout.

In response, they doubled the guarantees for the following weekend, and proceeded to blow past them again. That performance, albeit in a monopoly situation, set a high bar for any new competitors.

BetMGM has has just announced their first series, with more than $300,000 guaranteed. The series, starting April 18, will be 10 events long, with qualifiers on the site leading up to the event

Early indications show solid results on the regular tournament front. In just the first week of action, the major tournaments on the site all broke their posted guarantees. 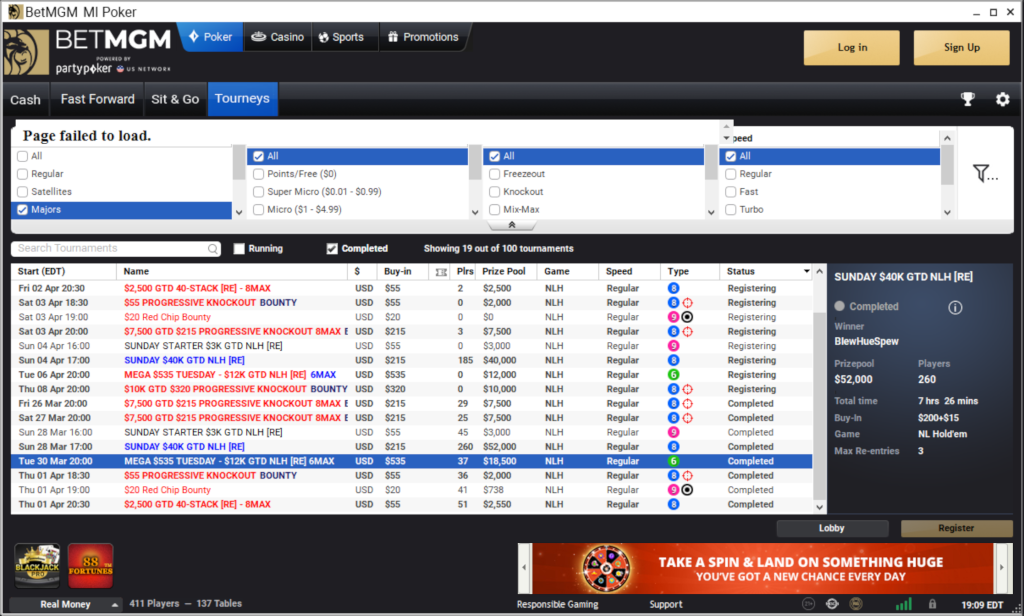 With barely a week of action in the head-to-head battle, it is too early to say how the Michigan market will be divided. PokerStars has a head start on the game, and used it to full advantage, posting strong cash and tournament performance since they launched.

BetMGM has a lot of catching up to do. They’ve been online for a bit more than a week, and while the cash game traffic shows a clear upward trend, overall numbers are still quite low. The tournament side looks a little brighter, with guarantees regularly being broken, but total field sizes are still smaller than their competitor as well.

It is far too early still to make any kind of prediction what the market will look like in the future, even as far ahead as the next quarter. BetMGM had a promising start, but PokerStars jumped the gun and is already off and running. The next few months will show how much of the gap BetMGM can make up.

MI Online Poker Market is Closing in on PA, Could Be Largest in US by September

For the fourth consecutive month, the Michigan online poker market was larger than that of New Jersey.

WSOP Michigan Storms in with the Biggest Welcome Bonus in MI

With more than a year of legal online gambling already under its belt, the Michigan online poker market finally got its…