With average traffic over 400 in its first week, PokerStars.MI overtakes PokerStars PA and WSOP/888 as the largest US network.

According to the latest cash game traffic figures, seen exclusively by pokerfuse, PokerStars.MI is right now the largest regulated real money online poker network in the US—larger than the combined WSOP/888 network, bigger even than its Pennsylvania counterpart, PokerStars PA.

PokerStars US launched its MI online poker room ten days ago. It is the third regulated online poker site in the US ran by the company, following on from its 2016 launch in New Jersey and its late 2019 debut in Pennsylvania.

All three online poker rooms are segregated—meaning the player pools are not connected together, nor with the global “dot-com” player liquidity. Yet despite this, thousands of players from Michigan state—population approximately 10 million—have flocked to the new online poker room.

This has resulted in one of the highest traffic levels ever observed by any online poker room in the US regulated markets at any time in history.

To put that in perspective, PokerStars PA—where PokerStars is also the only operator, and in a state with population 30% larger—was a tiny pip below, recording 405 players. PokerStars NJ was a third the size, at approximately 140 average seats.

All figures are based on average concurrent cash game traffic observed over the last seven days, rounded to the nearest 5 seats. All data used under license from GameIntel.com via the Poker Industry PRO Data platform.

WSOP/888, which has been active in Nevada since 2013, has only ever hit 400 concurrent cash game seats one time in its near eight-year history: Briefly for a few weeks last year in the spring in the first wave of the coronavirus pandemic.

PokerStars NJ has never got close to the level: Not even when it first launched in 2016, including a period where it was #1 in the market; nor even during last year’s global online poker explosion—there, it hit its all-time peak of 330 concurrent seats.

In fact, the only online poker room in the US to consistently report this level of traffic is PokerStars Pennsylvania. Since launch in November 2019, the network has hovered around the 400 seats mark. It briefly saw its traffic explode up to 1000 during the absolute highs of the Covid-fueled online poker boom. 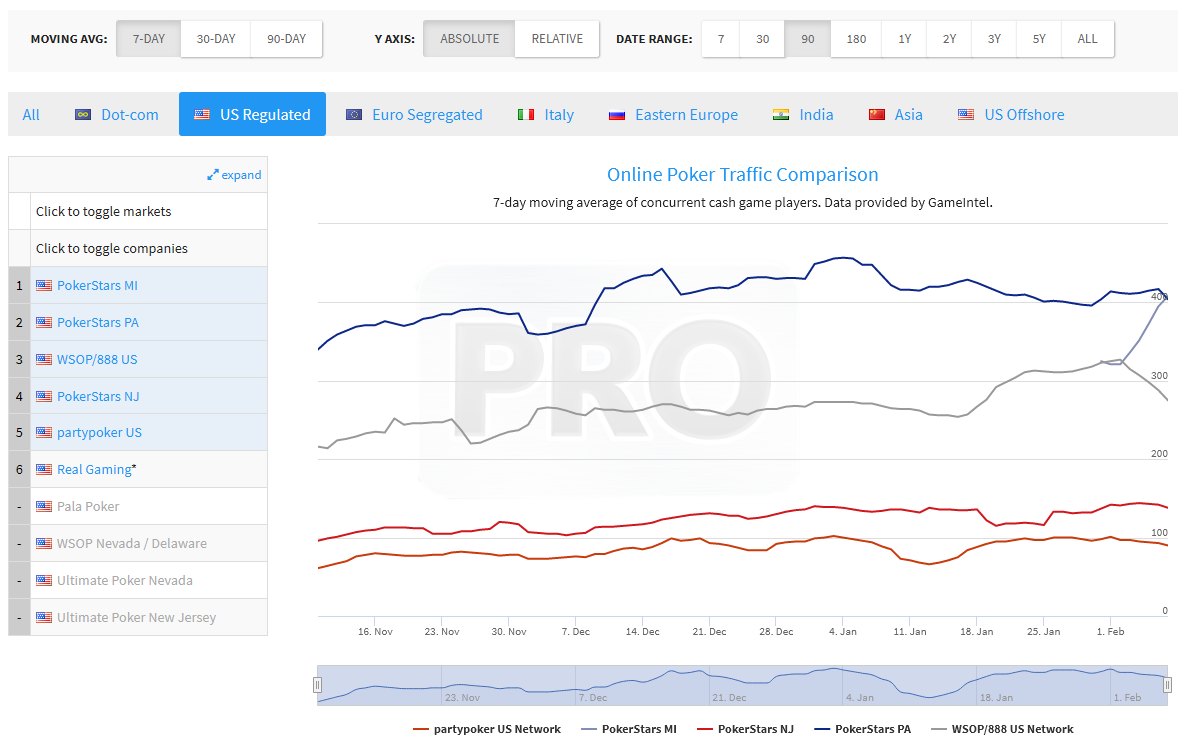 While cash game traffic statistics always give the most comprehensive view of the online poker market, the numbers out of the tournaments also show that PokerStars Michigan is enjoying a strong turnout—though spots are starting to show in the operator’s aggressive weekend schedule, and the first big overlay has been seen.

As pokerfuse reported last week, its first weekend saw a decent turnout to its Sunday Majors, with all guarantees covering easily. The Sunday Warm-Up, in particular, attracted a strong showing of over 300 entries.

Clearly buoyed by this success, PokerStars MI increased guarantees for the second weekend. Three of the four highlight tournaments saw bumps to their guarantees, and the site also unveiled the Sunday Special: Its new flagship event with a $100 buy-in and a $20,000 guarantee.

The Special certainly had a huge first outing. In total, it brought in 301 entries, generating a prize pool of $27,632—by far the largest in the state so far.

However, this did notably have a knock-on effect on other tournaments. The $50 Supersonic grew, easily surpassing its new $2500 with 85 entries to generate a prize pool of almost $400. However, the others saw dips.

The Storm dropped a few entries, but easily covered. The Warm Up was actually affected quite a lot, losing 112 entries—thought it still handily covered its $5000 guarantee.

But it was the High Roller that really suffered. On the first week, it attracted 63 entries to almost double its $7500 guarantee. Understandably, PokerStars then upped the guarantee to $10,000 for its second outing. However, yesterday it attracted just 36 entries, generating prize money of $8388—an overlay of $1612.

This could well be the first overlay in Michigan, and it is not a small one. Those 36 entrants certainly enjoyed some value—to the tune of almost $50 each.

The likely reasons for this are twofold: Firstly, the $100 Special will have attracted some players to that instead. Overall, the Sunday Majors generated prize money of almost $50,000, way more than the $28,000 in the opening weekend—so the level of spend has not dropped; it just shifted.

However, yesterday was also unique in that it was Super Bowl Sunday. This often has impact on tournament turnout—so this could well be a one-off.

Either way, players should keep watch on next Sunday’s tournaments, as there could be value opportunities.

Meanwhile, all eyes are now on the first big tournament series to be announced by PokerStars MI, details of which could come this week. Pokerfuse has predicted that it could be the first ever MICOOP, which could have a total series guarantee of up to $1 million. Watch this space.

PokerStars Teams Up with Detroit Red Wings to Skate Past Rivals