Michigan traffic jumped ahead of Pennsylvania days after opening—and it has not looked back.

The latest figures show that the MI online poker market averages approximately 475 concurrent cash game seats. This is made up predominantly of PokerStars Michigan, at just over 400 concurrent seats, and newcomer BetMGM Michigan, at around 75.

To compare, the single operator in Pennsylvania, PokerStars PA, sits at just over 350 cash game seats.

This lead is something of a surprise. Pennsylvania is the larger state and is more established. Yet ever since the first online poker room launched in Michigan, it has sat comfortably above PA online poker numbers.

PokerStars MI launched on Jan 31 and enjoyed an immediate influx of players, with more than 300 concurrent cash players on its opening days. That was initially below the PokerStars PA, which held around 400 concurrent seats at the time.

However, traffic figures in Michigan soon climbed rapidly from there. By February 8, MI had more concurrent cash players than PA, and it has held that position ever since.

Pennsylvania still has solid numbers higher than 350 players, but they have not come close to Michigan since early February.

The Pennsylvania market is more mature, with PokerStars opening their room in November 2019. Even with that long history, outside of the Covid spike from March through July 2020, traffic for Pennsylvania history has, at its best, been on par with current Michigan numbers.

At the height of the early pandemic bump last year, PokerStars PA rocketed up to almost 1000 concurrent users. That peak only lasted through June, as they were down to under 500 by the end of that month.

By the time PokerStars launched in Michigan in late January, PA traffic was right on the 400 level. It took a week for Michigan to catch up, and it has never looked back. 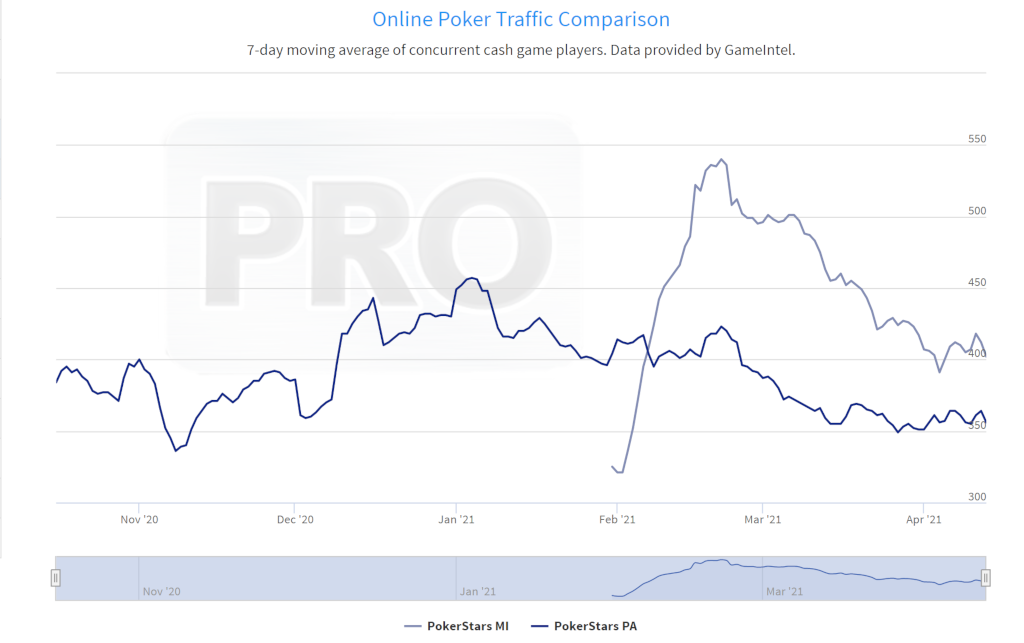 Michigan’s traffic peak hit in late February, when there were 540 average concurrent players—over 100 more than the same day in Pennsylvania. While they have not seen more than 500 since early March, they have maintained a consistent lead over their partner room in PA.

The big question is why. With almost 13 million people, Pennsylvania is significantly bigger than Michigan, which should mean a larger market for poker. Michigan has fewer than 10 million people, so should have a market roughly 80% of the size of Pennsylvania.

Instead, the numbers are reversed, with the smaller market outpacing the larger one by more than 30%.

One possible answer is a surge from early excitement from Michigan players with their faces pressed against the glass of other regulated states, waiting for their own chance to play.

Notably, Pennsylvania did not see a similar surge at the beginning of their run. In late 2019, they did have an initial rise after they opened, but they did not hit 500 concurrent users until March of 2020, a total Michigan capped in their third week of operation.

PokerStars did get new competition a few weeks ago in Michigan, which has contributed to overall market traffic. BetMGM MI entered the market on March 21 and has seen a steady rise in cash game traffic since launch.

However, it only accounts for about 20% of the market in MI, with BetMGM yet to top 100 concurrent users. Additionally, PokerStars’ high in Michigan came before BetMGM’s arrival, it has been holding relatively stable against their new competitor.

When the BetMGM numbers are included in Michigan, the market is larger than Pennsylvania by a significant amount. The 350 concurrent users on PokerStars PA are barely 75% of the combined total of Michigan players.

With solid cash game numbers, and a tremendous response to the first tournament series in Michigan, MICOOP, it is clear there is an strong appetite for poker in the Wolverine State. Despite a smaller overall market, and a competitor trying to cut into their pie, PokerStars MI continues to outpace its Pennsylvania cousin easily.

It remains to be seen whether they can maintain that lead. There are expectations that BetMGM will be expanding into PA very soon, and WSOP.com and 888poker revealed plans to roll out in both markets soon, so both markets will be in flux over the next few months.

How numbers will look when there are more players in Pennsylvania, or a third room in Michigan is still up in the air. For now, Michigan is the clear winner for PokerStars. 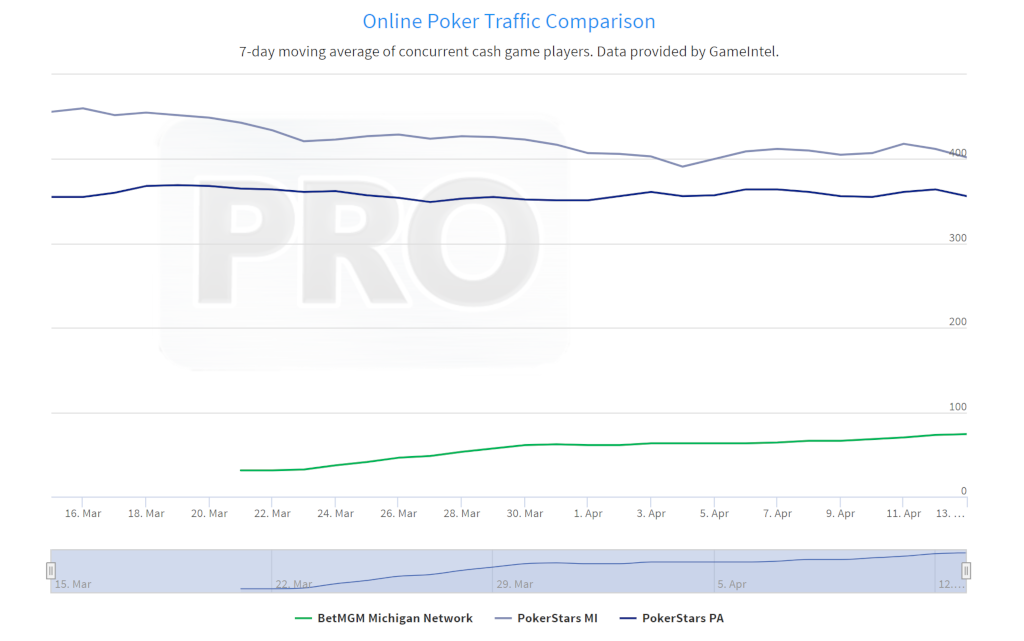 The first Michigan Spring Championship of Online Poker (MISCOOP) on PokerStars MI is finally in the books. The series…

BetMGM MI Casino continued its domination of the Michigan online casino market in April, as one of only two operators…

PokerStars is the largest and probably the best-known online poker operator on the global scale. Since 2014, the site…