BetMGM has a slow opening Sunday in the midst of PASCOOP.

With the Pennsylvania Spring Championship of Online Poker (PASCOOP) came to a close, PokerStars PA started the month off on a high with a huge turnout to its Sunday tournaments. Meanwhile BetMGM Poker PA had a slower opening Sunday, and players enjoyed some lucrative overlays.

The final weekend of PASCOOP ran this past weekend in Pennsylvania, and players came out for the special edition games on Sunday. PokerStars broke guarantees across the board, both in official PASCOOP events as well as regular Sunday games.

BetMGM Poker PA, part of the partypoker US Network of state skins, launched only a week ago, right in the middle of the PASCOOP maelstrom. This past weekend marked its first set of Sunday tournaments, and it missed guarantees on their major games.

That is hardly surprising—indeed, pokerfuse predicted there would be some big overlay opportunities for players: Given their aggressive guarantees with such a new site it seemed near-impossible the new network would cover them. 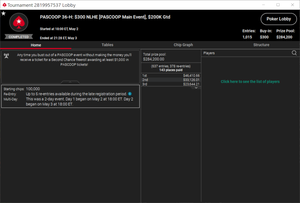 The final weekend of PASCOOP ended well for PokerStars, with a Sunday that saw guarantees fall across the schedule. The flagship Main Event had $200,000 guaranteed, and with 1,015 runners ended up with $284,200 in total prizes.

The Sunday success wasn’t limited to the Main Event. All major PASCOOP events on Sunday broke their guarantees, including low and mid track events. The two lower versions of the Main Event both broke guarantee by more than 35%.

Even the non-PASCOOP games did better than expected. The Sunday Storm is PokerStars’ bargain-priced Sunday Major at just $10, and even it clocked in at more than 20% over guarantee. At the other end of the scale, the $250 Sunday High Roller also did about 20% better than the posted guarantee.

In total, the major games on Sunday at PokerStars had a clean sweep. They collected almost $100,000 more than they guaranteed across the games, and earned more than $25,000 in fees.

Since their launch in late 2019, PokerStars has enjoyed monopoly access to the Pennsylvania poker market. That changed a week ago when BetMGM jumped into the fray with the first competition to the global poker juggernaut.

None of the major Sunday offerings from BetMGM managed to make their guarantee. In total, there was more than $10,000 in overlay in their three major games this past Sunday, with most of that hit coming in the Sunday $40K, which only collected $30,400.

BetMGM is live in Pennsylvania for online poker!
Get Your Welcome Bonus
Get $25 in FREEPLAY plus $600 deposit match bonus! »
No bonus code required

It is no surprise that BetMGM was in tough against the final weekend of PASCOOP. The PokerStars series has been breaking guarantees throughout its run, though not without a few hiccups, and a lot of attention is focused on it.

It will take a few more weeks of data to make any real predictions about how the new entry will affect the market.