GGPoker on the rise in the latest round of the heated battle for online poker traffic.

For more than a decade, PokerStars has reigned supreme in the global online poker market, with the biggest series and the most traffic by far. But over the last year, upstart GGPoker has been challenging for the title.

Pokerfuse and PRO have been tracking this fight closely, noting how the pair have traded places multiple times over the last two months.

Throughout August, PokerStars led the market, but a recent surge from the new home of Daniel Negreanu has GGPoker take the lead in global cash game traffic once more.

Today, the pair remain very close. GG has just gone over 5600 concurrent average players at the tables, its highest in six months. This is just enough to out-pip its rival, which hovers just above 5500. But the gap is less than 2%.

PokerStars.com: The world’s largest, most trusted, and most regulated online poker room in the world.
GET YOUR FREE PLAY BONUS
Sign up to PokerStars.com today »
CHECK SITE FOR BEST BONUS CODE

Data is based on a seven-day moving average of concurrent players at the real money cash game tables, tracked by independent industry monitor GameIntel and available on the Poker Industry platform.

GGPoker burst onto the scene in 2020 with a huge WSOP Online series after the COVID-19 pandemic closed down live poker. Since late June of this year, GGPoker has flirted with the lead.

GG ticked over above 5,000 concurrent users near the beginning of 2021, and has maintained a steady pace around 5,500, while PokerStars came down to their level, dropping from a high of 8,600 users at the beginning of the year down to the current 5,500. 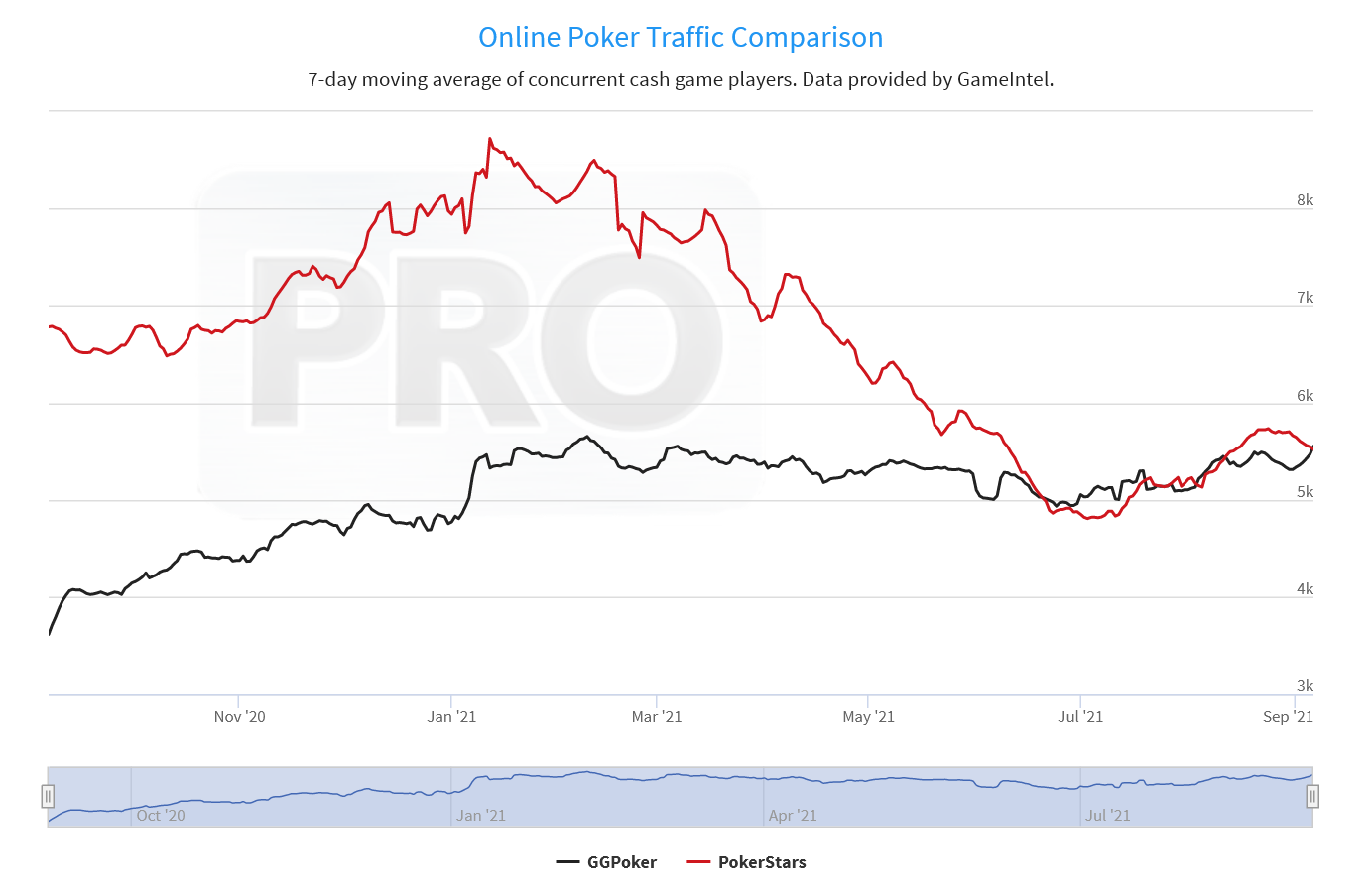 Rumble in the Summer

The battle really heated up this summer. GGPoker took the traffic lead in late June and held it through much of July. From there till the second week in August it was anyone’s game—the lead switched back and forth.

In the second week of August, PokerStars took off for a couple of weeks, capturing the clear lead again as GGPoker hovered around 5,400 users compared to a PokerStars high of nearly 5,800.

That is where Stars plateaued, hanging around that level for a week or so before starting to fall again.

As PokerStars started to slide, GGPoker was picking up the slack, increasing quickly to once again take a small lead in the battle. This has coincided with the WSOP Online Main Event.

With both GG WSOP and WCOOP series playing down to a conclusion now, it will be fascinating to see how the cash numbers run over the next week and into the busier autumn period. 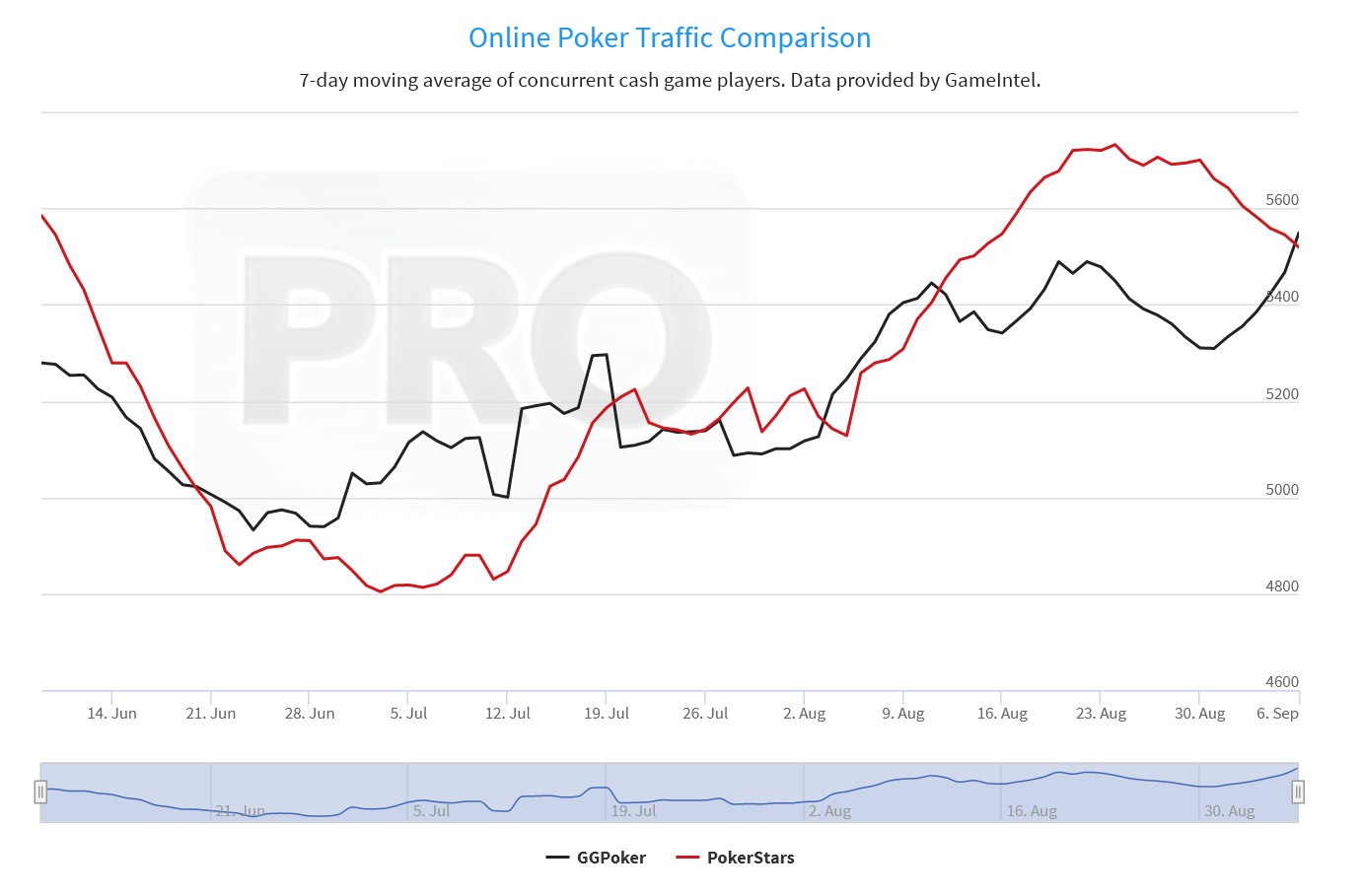 How Did They Get Here?

With just a look at the historic cash numbers up to the start of 2020, it might be hard to imagine GGPoker in a battle for supremacy with PokerStars. When 2020 dawned, PokerStars had around 3 times the traffic of the relatively small GGPoker.

GGPoker began signaling its intent to play with the big boys as early as 2019 when it signed Daniel Negreanu to the roster shortly after his exit from PokerStars. That sent the signal that it was serious in the online poker world, and set the stage for the WSOP deal in an unprecedented 2020.

It was clear by the end of 2019 that GGPoker was on the upswing, and while all operators saw major boosts in 2020 as a result of the pandemic, GGPoker increased their traffic more than 3x over the course of the year, from around 1,500 concurrent users at the start of the year to more than 5,000 at the end.

And, critically, its traffic did not fall post-pandemic lockdowns like the competition. 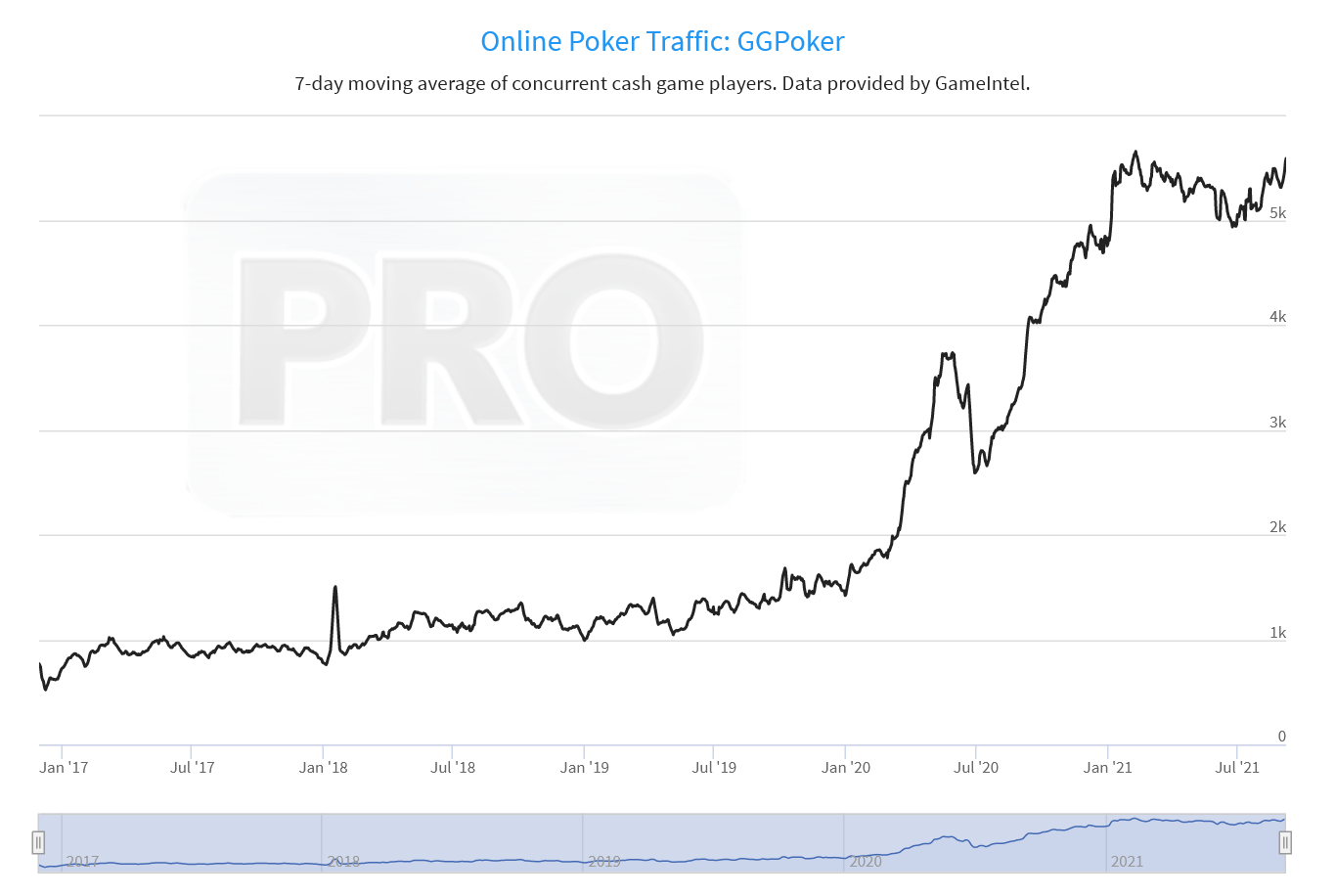 Indeed, since that surge, GGPoker has held steady between 5,000 and 5,500 for most of 2021. Rival PokerStars, on the other hand, saw a surge like everyone else over the Covid period, but also saw larger drops after the initial rush was over. Still, it was well ahead of the upstart when 2021 dawned, with around 8,000 concurrent users.

While GG remained fairly stable in 2021, its rival dropped quite a bit—enough to fall to second place for the first time in 15 years. From a high of more than 8,600 in early 2021, it lost close to half its traffic at one point, dropping below 5,000 users in early July. Those drops allowed the relatively stable GG to hold on and battle for the lead through August and September.

It is clear that increased attention for GG as a result of the huge WSOP series in 2020 did a huge amount to put the operator on the map. It made moves like a raft of new ambassadors, and worked hard on software upgrades and game innovations like Battle Royale.

Meanwhile, PokerStars has been fighting its own battles. Due to corporate-wide decisions from new owners Flutter, it has had to exit various markets over the last year: According to a recent report from Poker Industry PRO, PokerStars now prohibits real-money play from half the countries in the world.

It is also trialing a brand new rewards program to reverse what Flutter has called a product “deprived of proper levels of investment” for years.

It was implemented on July 1 and had an immediate positive impact on cash game traffic. While traffic it has dipped this month, it is still up 15% on its seasonal low two months ago. If the program rolls out globally—the trial is set to end at the end of this month—one could certainly see traffic change dramatically.

GGPoker has recently landed the best blows, taking a small lead on points at the end of the latest round. But the fight is far from over, and PokerStars is far from on the ropes. Stay tuned for what might be the biggest battle ever as the bell rings for the next round.

The international leg of the 2021 WSOP Online on GGPoker has entered its final stretch.

NJCOOP 2021 on PokerStars New Jersey: Everything You Need to Know

The most recent revenue numbers from New Jersey showed a strong month of results in the poker vertical, with the…