The twist is that the prize pool is random. Most of the time players fight over just double the entry fee, but randomly this payout is increased—up to 2000 times.

Players are told how big the prize pool is when the tournament commences.

“From the random prize pool draw at start of play to the fast-paced structure and format, Jackpot Sit & Go Tournaments have been designed to provide players, even if they only have a few minutes to play, a truly exciting way to compete for big prizes,” Sarne Lightman, Full Tilt Poker’s Director of Marketing, is quoted as saying in the press release. 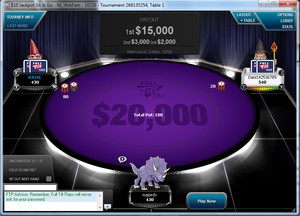 Sister site PokerStars can lay claim to the idea of lottery-style randomized variable prize pool tournaments, with their Golden SNGs innovation. However, Goldens only run during special promotional periods, and the multipliers are added money as part of the promotional prize giveaways.

It was Winamax that crystallized the concept into a regular offering and introduced many of the specifics which are present in Full Tilt’s Jackpots.

Dubbed Expresso, Winamax’s lottery tournaments are three handed fast-speed tournaments with no table selection (players are automatically assigned to the next table, like with fast-fold games). All tournaments are winner takes all. Most tournaments pay out just double the buy-in, although some go up to 1000x the prize.

iPoker saw the success and brought the format to the dot-com market with the launch of Twister poker in January 2014.

The differences between Twister and Expresso are very minor—the format is the same, the available buy-ins match, and the overall player experience is very similar. The only slight changes are to the structure and payout table, though the maximum payout, rake and overall variance is very similar.

Full Tilt has deviated more from the tried and tested format.

The more top-heavy payout table is afforded with a reduced value in the middle of the pay table.

Another change is the payout structure for these three big prizes: Instead of winner-takes-all, all players win a proportion of the prize pool (split 75%, 15% and 10% for first, second and third, respectively). This helps spread around the prize pool and also introduces different strategy the rare times these tournaments are triggered.

The rake for Jackpots is slightly lower than Expresso and Twister. Based on the pay table, on a $1 Jackpot tournament, $3 is collected in fees and $2.85 is paid out to the winner or winners, giving the “house” an edge of 15 cents total. Per player, that’s 5c for each $1 tournament, or 5% (at Winamax this figure is 7%; iPoker is 6.88%).