PokerStars Rolls Out 6+ Hold’em in Italy, 6+ Tournaments Set to Debut

The Short Deck variant will be the first new novelty poker game by PokerStars to be offered in a tournament format.

The highly anticipated exciting poker variant, 6+ Hold’em, has been rolled out for real money across PokerStars’ Italian market.

It becomes the first variant in the recent wave of cash game novelties from PokerStars to go live in a ring-fenced market. The game made its debut across PokerStars’ global dot-com and dot-EU player pools two months ago in mid-January.

Pokerfuse revealed that 6+ Hold’em was going to be released in the Italian market a month ago after PokerStars announced on its Italian blog webpage that it will soon be offering its short deck variant in the country in the near future.

The game finally made its debut on Italian client on Thursday, March 21 at 2 PM GMT. It can be found under the new “6+” tab in the PokerStars main lobby.

The landing page of 6+ Hold’em on the PokerStars Italian website says that the game is available in both cash games and tournaments. However, at the time of writing, only cash games are available while 6+ tournaments have yet to be added in the tournament lobby.

“Available in cash games and tournaments, exclusively at PokerStars, 6+ Hold’em is your chance to play an action-packed variant loved by high-stakes players around the world,” it is stated on the website.

Indeed, this is a big reveal as there has been a huge demand for 6+ tournaments. This indicates that 6+ MTTs may also make their way to the global player pool soon which would go far in clearing up the doubts about whether the game will be offered permanently.

Also known as Short Deck Poker, the game is played quite similarly to traditional Texas Hold’em except with a stripped down deck. The game uses 36 cards of the standard 52-card deck, with cards from deuces to fives removed. As a result, hand rankings in this variant are slightly different.

In PokerStars’ version of Six Plus Hold’em, Flushes beat Full Houses as there are fewer cards in the deck, but Straights still beat Trips unlike in other variants where Trips are ranked higher than Straights. Aces are played both low and high just like in traditional Hold’em, but in 6+, Aces can also be played as Fives when making a straight. The lowest straight is A6789 and the highest straight is TJQKA.

This makes the game more of an action-oriented game as players are more likely to get dealt premium hands due to the low cards being removed from the deck.

As seen in the dot-com client, 6+ is with the “Seat Me” lobby feature, meaning players cannot choose their table or seat. Instead, they simply select their buy-in, and they are automatically taken to an available seat.

Currently, there are eight different buy-ins available, starting at NL2 up to NL500. Played as 6-max, the PokerStars version of Short Deck uses a button blind structure, meaning there is no Big or Small blind, instead, every player on the table pays an ante while the player on the Button not only pays the ante but also pays a blind equivalent to the size of the ante. Players cannot choose how much to sit with, as the starting stack is fixed to 100 antes.

Due to the local regulations, the rake is fixed at 5.50% across all the buy-in levels. Caps on the rake depend on the table stakes and buy-ins which is shown below: 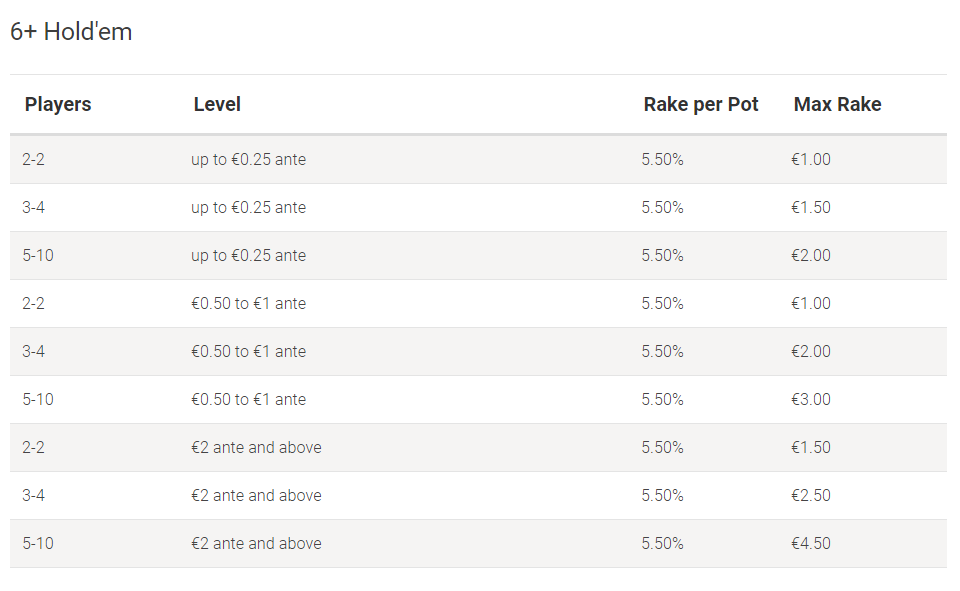 PokerStars has also shown interest in adding 6+ to its European segregated market comprising of France, Spain, and Portugal. However, according to French law, only games based on a deck of 52 cards are currently approved. PokerStars is hoping to have the decree amended so that they can offer this game in that market too.

Fusion to Launch in Italy?

Interestingly, the web page which shows the rake for all games also displays rake for Fusion, another cash game novelty which made its debut in PokerStars global player pool last year. The game was withdrawn after running for two months. The game was well received among the players, and based on the rake info, it appears that Fusion could also be launched in this market soon.

Earlier this week, the new version of Stars Rewards went live in the Italian market. The room has made several changes to its loyalty program, including changes to the requirements to upgrade a Chest, added a couple of new Chests, as well as added a new “exchange” feature. The average value of a Chest has more than tripled, but the requirements for leveling up are now much harder to achieve than before.

The revamped Stars Rewards is expected to roll out to the wider dot-com and dot-EU markets as well as the European segregated rooms later this year.

888poker has announced a new ongoing Blast Leaderboards promotion, paying out $5000 every day to the top performers…

Ask anyone that was involved in online poker at the time, and they will probably be able to tell you where they were on…

A Decade Since Black Friday, a Decade of Pokerfuse

April 15th, 2011 is, of course, the date of online poker’s Black Friday: The day when PokerStars, Full Tilt Poker…