Activity at the cash game tables of PokerStars PA is more than all other US regulated networks combined.

Data used in this article provided by GameIntel.

On November 4, PokerStars launched for real money in the state of Pennslyvania. It went through a two-day soft-launch period before going live 24/7.

So, one month on, how has the launch gone? Simply put, Extremely well.

Tournament traffic has been very high: the turnout for the ongoing PACOOP has been so strong that PokerStars has already upped the guarantees by over 20%. But perhaps the clearest sign of its strong first month is its cash game traffic.

Based on data tracked by independent monitor GameIntel, available on the PRO Data platform and available exclusively to pokerfuse under license, cash game traffic hit an average of 400 concurrent cash games within the first two days of play. And from there, it has only grown.

Today it is hovering around 450 concurrent players, a level it has held for the last week. 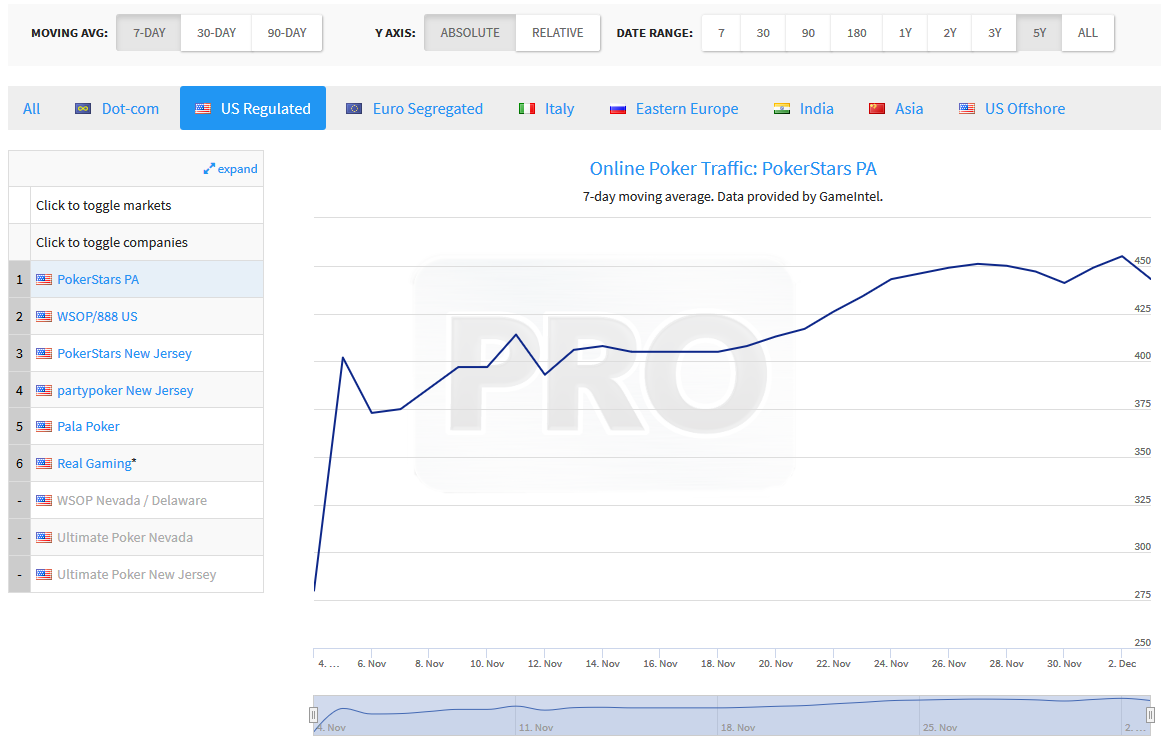 So how does that compare? In terms of the United States regulated market, it is unprecedented. No other US-facing site has maintained levels this high at any point in their history.

Perhaps the clearest comparison is with PokerStars NJ. When it launched in March 2016, it hit a high of around 160 concurrent cash game seats, which at the time was enough to propel it to the top of the US regulated market.

To compare, Pokerstars PA after its first month is almost three times higher than its New Jersey counterpart when it first launched. Today its traffic is more than six times higher.

The situation is of course different in a few key ways. When PokerStars launched in New Jersey, the market already had two big players there. The operator was entering an already-saturated market. In Pennsylvania, there had been a regulated poker blackout for eight and a half years.

But the figures still show the huge pent up demand for online poker. 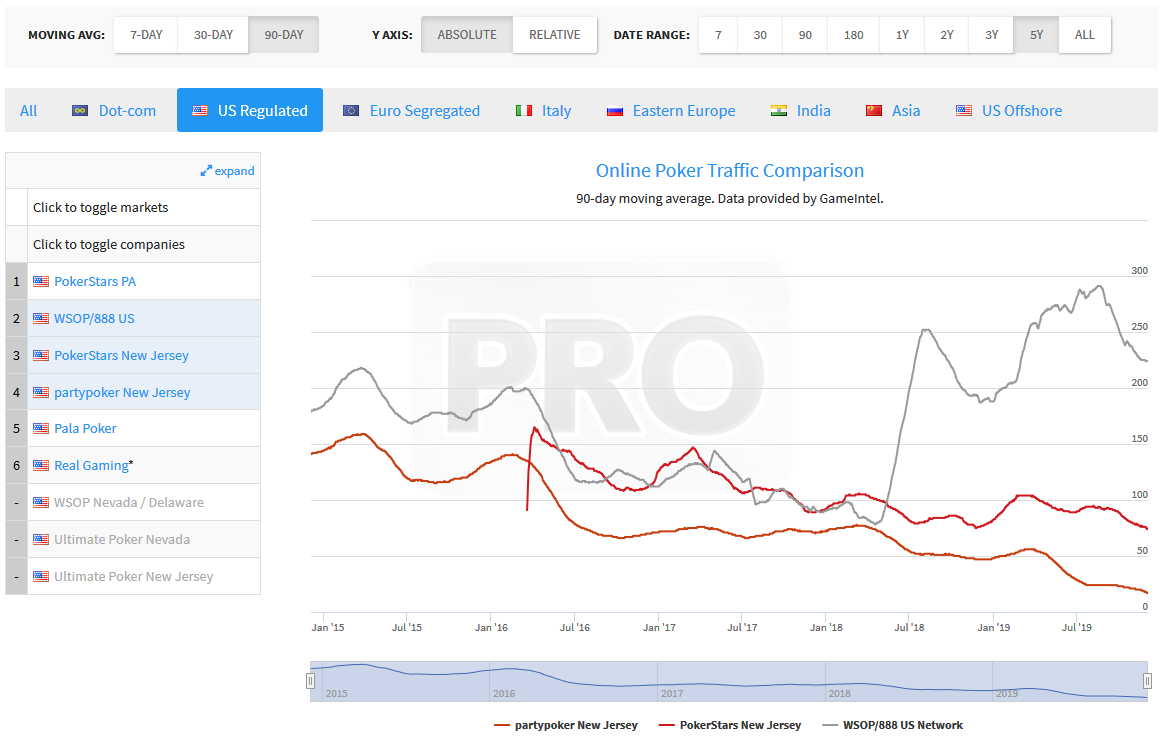 Even stacked up against the biggest operators in the United States, PokerStars PA shines. WSOP/888 network has the luxury of combining the states of Nevada, New Jersey and Delaware; in two of these, it has a de facto monopoly. All combined, the population of these three states is about the same as Pennsylvania.

The highest traffic it has even hit was during the summer of 2019 during the WSOP live festival. Then, it it got to around 300 seats. For one day—June 4, 2019—traffic spiked at 398, its highest ever. That is still hosting fewer cash game players than PokerStars PA does today.

If we combine all US regulated networks together—that is, WSOP/888, PokerStars NJ and the Borgata/partypoker Network—today they average around 300 concurrent cash game seats. Only a couple of times in history—in 2014, when sites first launched in New Jersey and again in early 2016 when PokerStars went live in New Jersey—has the combined traffic exceed that of PokerStars PA today. 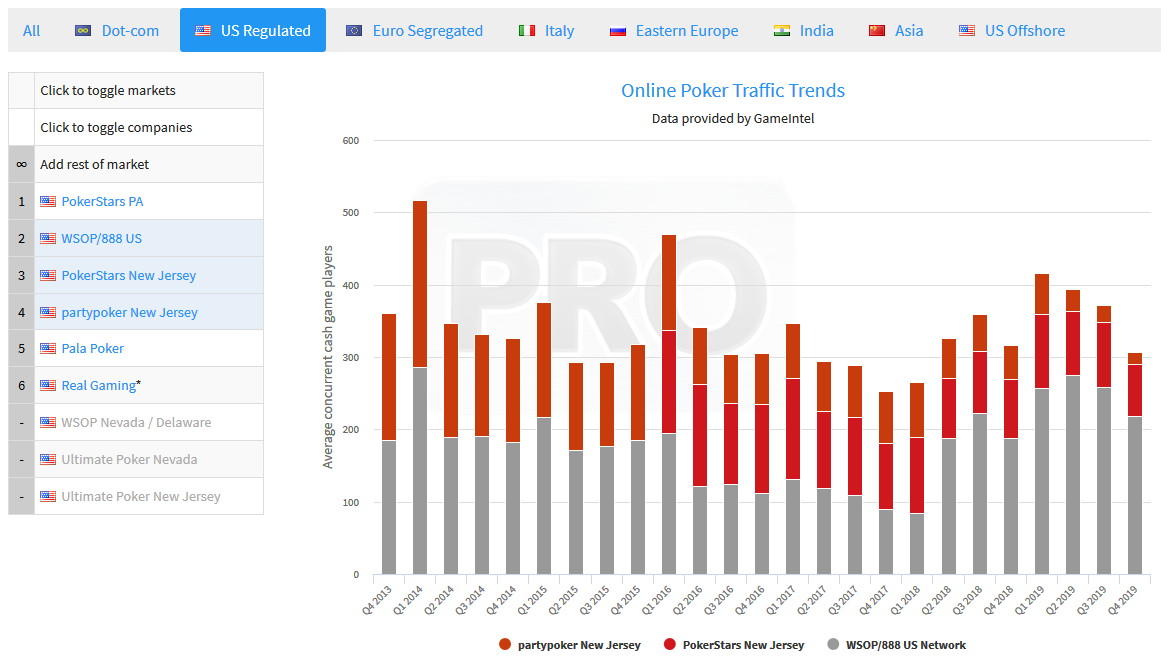 Looking beyond the United States markets, PokerStars PA is second only to PokerStars Italy in terms of cash game traffic for an isolated country or state, operated by any brand in the world.

It could well be that traffic dips. We have seen this huge surge of traffic in the past, like when PokerStars first went live in Portugal, ending a multi-year blackout. For a while, PokerStars Portugal was a top-ten ranking network globally. However, over time this traffic waned to levels more expected of a country of its stature.

We should expect this to happen in Pennsylvania to some extent. Once the excitement calms down and the initial pent up demand is fully realized, it will be much harder to come by new customers. Existing customers’ interests will fade.

Another advantage PokerStars PA has is it launched going into the traditionally busy period of the year. December and January are classically the peak for online poker, with colder months bringing more people inside looking for home entertainment. The difference between the winter high and summer low can be upwards of 30%.

But there are reasons to be optimistic for growth in the months to come. PokerStars is only just beginning to ramp up its promotions and marketing. It is running its first MTT series now, and clearly has a lot of space to grow guarantees, which gives it more marketing muscle.

And it is running a big Christmas Calendar promo for all players, presumably the first of many to come. More games should launch in the future—it is still missing some core popular game types, like Zoom and Spin & Go.

Plus it is also a long game getting the word out to Pennsylvanians that online poker is now 100% legal and regulated in the state.

We have also seen the US states bucking the trend a bit when it comes to seasonality. The summer has actually been a bumper time for states in the US, primarily due to the World Series of Poker. Whether this will have a halo effect for the PokerStars brand remains to be seen, but it might not quite be the doldrums that we see in some of the European markets.

Whether this cash game traffic surge lasts all winter or starts to dip, we will have to wait and see. What seems to be clear now is that there is going to be no better time to jump into the games, whether it is cash or tournaments.

The 2020 World Series of Poker is over, and we're not exactly sure what just happened. — read more »

Online poker in the state of Pennsylvania generated $2.7 million in revenue during the month of August, according to…

$1.5 million Up for Grabs During PACOOP from PokerStars PA

The largest online poker tournament in Pennsylvania is back.

With the Slow Season Just Ahead, Declining Revenue for Pennsylvania Online Poker Could Persist

Pennsylvania online poker produced $3 million in revenue during the month of July, according to figures released this…

Pennsylvania Online Poker Players Can Win Their Share of $175,000 via PokerStars PA Latest Promotion, The Vault

The Vault is a new promotion from PokerStars PA that is running August 10 to 30.