The first Michigan Spring Championship of Online Poker (MISCOOP) on PokerStars MI is finally in the books. The series was ambitious, with a guarantee of more than $2 million, but it managed to easily surpass this mark, ended up handing out more than $2.3 million in prize money.

The series ended on a high on Monday, May 24. The Main Event exceeded the $200,000 guarantee by more than 20%, emblematic of the series overall, which has set a new record for the largest tournament series in the Michigan online poker industry.

The latest edition of the signature poker series from PokerStars Michigan ran from May 8 through May 24. It kicked off with hopes high after a phenomenal opening MICOOP series back in March which saw so much interest that the operator doubled guarantees part way through and still crushed them.

The latest series had a lot to live up to, but it managed to exceed the previous series in total prize pools. The operator went into the series with just over $2 million guaranteed and managed to beat that number by 17% overall. 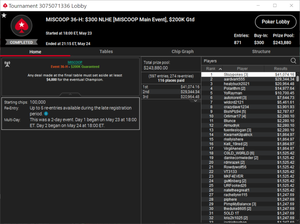 There were 120 events across three buy-in levels in the latest edition of the Championship series. It would have cost a player more than $11,000 to play in every event in MISCOOP, and across the whole series, more than 40,000 entries were recorded in the various events.

Almost 90 different tournaments across the schedule surpassed their guarantees, some of them by huge amounts. Event 31-L, a $10 buy in with $1,000 guaranteed, nearly doubled the guarantee with $1,947 in total prizes, but even some big ones scored huge guarantee increases as well.

PokerStars MI: Pick the bonus that works best for you
Play one cash hand, Get $50!
NO CODE NEEDED
Generous match on your first deposit up to $600!
STARS600

PokerStars was the first online poker site off the ground in Michigan after the state legalized online gambling early in 2021. PokerStars launched their poker app in the state at the end of January.

Before the end of their first month in operation, the first edition of MICOOP ran and crushed expectations. The opening weekend of the first ever online poker festival in Michigan was far larger than expected, with more than 6000 entries and several events doubling the initial guarantees.

That led PokerStars to up the ante by doubling the guarantees for the following weekend’s events. Even with the new guarantees, they still put extra money in the prize pools. In the end, the first series generated more than $2.2 million, well above the $1.4 million guaranteed.

That puts this second series right on pace with the first, ending up with about $100,000 more in prizes this time around. The main difference between the first and second running is that PokerStars knew what to expect going into this latest series and set the guarantees accordingly. That meant there was no need to reset them mid-way like the first series. but they were still comfortably surpassed in most cases.

The success of the latest series shows the consistency of the lead operator in the Michigan market. With both the MICOOP and MISCOOP series coming in at a little over $2 million in prizes each, it will be interesting to see if the series sizes remain consistent into the future, or start to move one way or the other.

PokerStars does have some competition in the Michigan online poker market now, with the recent entry of BetMGM Poker MI. So far, the newcomer has not gained the traction of the PokerStars juggernaut, with their recent series falling short of guarantees.

888poker, through Caesars and WSOP.com, are also planning to be in the game by the end of June so the Michigan market is yet to be fully realized. For the time being, PokerStars, with their stellar series, are the clear front-runners in the Wolverine state, but the second half of 2021 in Michigan will look very different to the first half.