After a ten-month lull, PokerStars is back trying out exclusive, limited edition Hold’em variants. How might these maritime-themed games play?

Much like our other exclusive games, Deep Water and Tempest will be offered by PokerStars for a limited period.Two new online poker games exclusive to PokerStars are going to launch very soon on the global dot-com site. It will be one of the biggest product updates this year.

Not much more is known about how these games will play, other than the obvious nautical theme in both of them. They will probably include an ante that changes in size.

It is also unknown when the games will be released, but pokerfuse believes that they will likely come this year. They will also be only available for a short period of time, likely six to eight weeks.

A PokerStars spokesperson confirmed to us that these games were on their way, but revealed no other details on the formats.

“Our aim is to satisfy those who may be hungry for a deep strategic challenge, as well as those wanting a simple, no frills thrill,” PRO was informed. “Much like our other exclusive games, Deep Water and Tempest will be offered by PokerStars for a limited period.”

Whether these games will fit more into the “deep, strategic” bucket or the “no frills thrill” remains to be seen.

A History of New Game Innovation

PokerStars has released five cash games novelties over the last two years. Split Hold’em, Showtime Hold’em, Unfold Hold’em and Fusion were all launched in 2018 and lasted for less than two months before they were taken down and another came to take its place.

Each of these games took cash game Hold’em and put some kind of twist on the format. Two sets of community cards were dealt out in Split; players had to show their holecards in Showtime; players could “unfold” their hands in—you guessed it—Unfold; and elements of Omaha were added in to Fusion.

Then in 2019 PokerStars debuted 6+ Hold’em, and that schedule all changed: The game has remained in the client ever since, and no other new cash game formats have been deployed all year.

It is perhaps no surprise that a well-established game like Short Deck was the game that stuck. It is spread elsewhere online, including a 2019 debut from partypoker and another just this week from GGNetwork.

It has roots is in the live scene, proving popular in high stakes games in Asia. There is even a Short Deck WSOP bracelet event now.

6+ Hold’em has been available on PokerStars for almost a year and shows every sign of staying permanently. The operator has launched 6+ MTTs and even tried Spin and Gos, albeit on a temporary basis.

Power Up Out, Deep Water In? 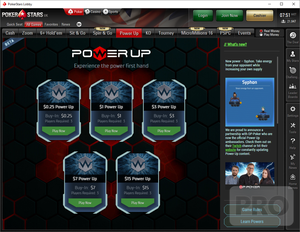 So it may well be that PokerStars felt it did not have the space to add yet another game novelty to its product offering, cramping up the lobby.

And this could be why it has just announced that Power Up would soon be retired.

As exclusively revealed by Poker Industry PRO and pokerfuse earlier this week, the long-standing tournament esport hybrid game Power Up will soon be taken offline.

“PokerStars has made the decision to remove [Power Up] from the poker client,” we were told. “Designed to bridge the gap between poker and video games, Power Up had a strong and loyal following.”

The operator did not really explain why it was getting withdrawn—presumably that loyal following was ultimately not strong enough to justify its continued presence in the poker client.

But what it does do is create some free real estate in the lobby tabs for a new game.

We would expect either Deep Water or Tempest—or possibly both—to deploy soon after Power Up’s withdrawal.

A Likely Path to Launch

Given PokerStars’ history with new limited-edition game variants, it is safe to assume that the games will be in cash, at least initially: All five of the operator’s latest games started life as a cash game before (in some cases) being tested in MTT format.

Cash games are simple to launch, require less liquidity to get going, and need less commitment from the operator. It is a perfect test bed before trying it in other formats.

All prior games have launched with a so-called “blind” lobby, where players cannot select their table but rather just choose a buy-in to get automatically seated. All of these games have also had fixed buy-ins.

It seems likely that both Deep Water and Tempest will have blind lobbies and fixed buy-ins.

Could They Be Linked?

Deep Water has been on the cards for a long time—pokerfuse sister site F5 actually revealed that a game under that name was under development all the way back in April of this year. Tempest, however, is all new.

But it does appear the operator is readying both for launch. And the two games are clearly linked in theme—we’re getting obvious maritime vibes from both games.

The design is also similar. Both use a similar green palette, and the logos of both titles have a matching curved ribbon for the Hold’em, sat below an arched logo. None of the operator’s previous games had this element to their logo.

This might lead one to guess that the games could be linked in some way. Maybe a player starts at the Tempest table (where the setting is above the water, in a storm), before leading under the sea with Deep Water.

Or perhaps PokerStars launches Tempest first, and Deep Water is a more complex game with additional rules that comes later?

Time will tell. What we can say with confidence is that the games will feel polished. Like previous formats, PokerStars will be making use of its new Aurora game engine so the games will come alive with animations and sound effects.

Expect to hear sounds of thunder and rain, see jellyfish bobbing about, even some deep-sea monsters might make an appearance.

And, while PokerStars has explicitly said these will be limited-edition games, if they prove very popular presumably PokerStars will reconsider that stance: “We’ll be listening and watching to see how our players enjoy our new innovations,” the representative went on to say.

Breaking: PokerStars to Celebrate 20 Years With a Month of “Big 20” Special Promotions

This year, online poker giant PokerStars is celebrating its 20th anniversary. To mark the occasion, the room will be…

PokerStars’ New Rewards Program: Everything You Need to Know

PokerStars Championship of Online Poker (COOP), one of the most recognizable poker series names in the online game,...

After the three-month trial period, PokerStars is rolling out its new and improved rewards system for players across…