Breaking: WSOP.com to Go Live in Pennsylvania on July 12, with Segregated Player Pool for Now

The wait is almost over as WSOP.com is eyeing July 12 to become the third online poker network after PokerStars and BetMGM/Borgata to open its doors to Pennsylvania players.

Online poker players in the state of Pennsylvania are set to welcome their third online poker operator as WSOP announces its plans to go live in the Keystone State next week.

Monday, July 12, WSOP.com will begin taking real-money wagers in Pennsylvania through its long-standing partnership with 888. The Gibraltar-based company will be providing their brand new and innovative Poker 8 client to power the WSOP PA online poker room.

This will be the first time that US players will have access to the modern Poker 8 software from 888poker, which represents a massive upgrade to the classic 888 desktop and mobile apps currently being used in New Jersey and Nevada—the other two states where WSOP currently operates.

It is expected that WSOP PA will undergo a soft launch period of two to three days during which the Pennsylvania Gaming Control Board (PGCB) will be conducting tests to ensure the site operates smoothly.

Only those physically located in Pennsylvania will be able to play at WSOP PA, and its player pool will be ring-fenced initially, meaning players will only be able to compete within their state. It will be segregated from New Jersey and Nevada, pokerfuse has learned.

However, this is expected to change towards the end of the year, as both Pennsylvania and Michigan state regulators are considering joining the existing Multi State Internet Gaming Agreement (MSIGA) or create their own two-state pact (Michigan and Pennsylvania).

Once that happens, online poker rooms including WSOP PA will be able to merge their player pools with states that have joined the compact.

But until that happens, WSOP PA will remain ring-fenced.

To celebrate its launch in its third US state, WSOP.com is expected to offer various promotions. A Deposit Match Welcome Bonus of up to $1000 and a $50 free play are likely to be offered to new players including Welcome Week Freerolls.

It is not known whether players at WSOP PA will be able to compete for a state-exclusive Pennsylvania-only WSOP 2021 Online Bracelet series—which is currently running for New Jersey and Nevada players. But it is certain that WSOP will be running a Circuit online series for Pennsylvania players as part of the ongoing 2021 WSOP Circuit season.

Earlier this year, WSOP’s parent company Caesars Interactive Entertainment (CIE) and 888 Holdings signed a multi-year extension for their existing partnership in the US. As part of the deal, 888 confirmed that they will provide their state-of-the-art Poker 8 software to power its online poker room both in Pennsylvania and Michigan.

Pokerfuse revealed the first screenshots of the upcoming new WSOP Pennsylvania client earlier this year which is in line with 888’s global poker client except that dark grey and dark red appear as the main colors instead of blue. 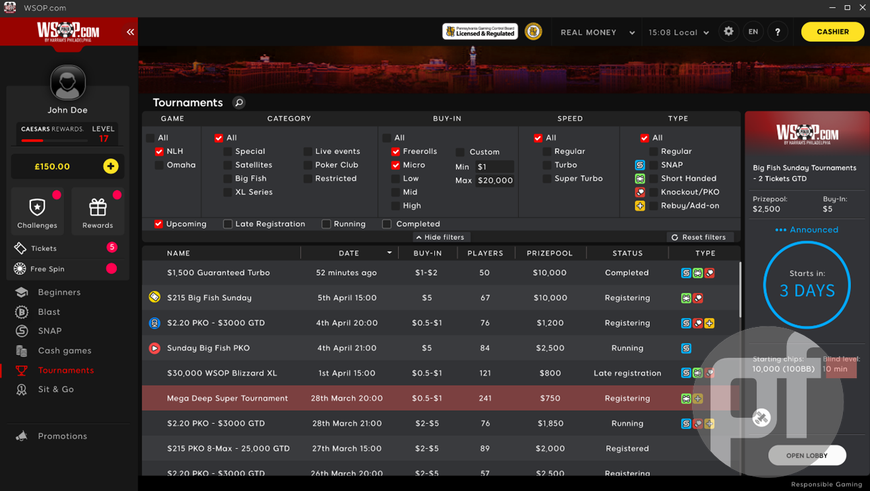 The poker lobby has been revamped, navigation has become easier, there are dozen of new table themes, new avatars, a new hand replayer, new animations and sound effects, and various improvements to site functionality. 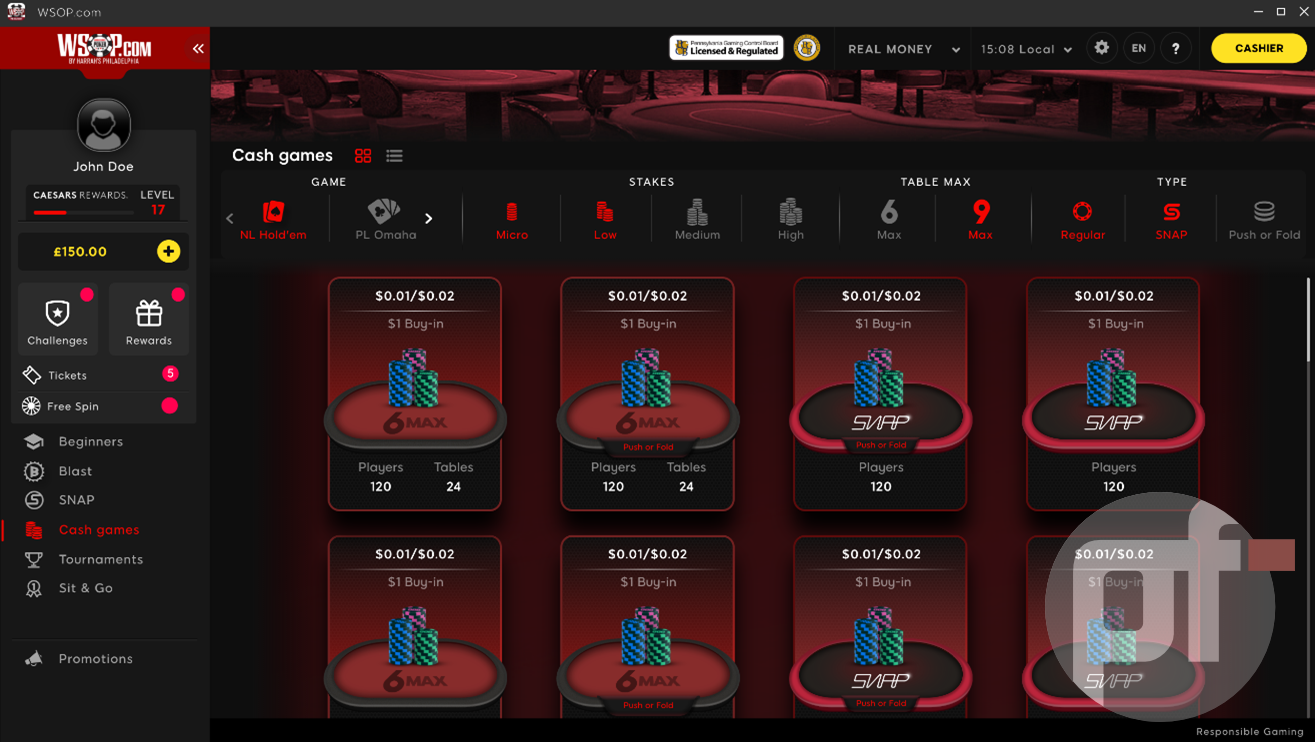 The Poker 8 upgrade also includes an overhaul to the mobile client, which is now slick and user-friendly thanks to the new portrait mode. Playing up to four tables at once is now possible and Omaha games are also set to work on the mobile app.

And Then There Were Three

The launch of WSOP in Pennsylvania next week will mean that players will now have three online poker networks to choose from:

The Pennsylvania online poker market had a slow start with only one poker room operating for the first 17 months. And now all of a sudden, there will be four active online poker rooms spread over three different player pools.

PokerStars PA was the first room to launch its site back in November 2019 and is still the clear leader in the market. Eighteen months later, BetMGM Poker PA and Borgata Poker PA sharing the same player pool and powered by the partypoker US Network went live in April this year, ending PokerStars’ de facto monopoly in the state. However, in terms of cash game traffic, it is far behind PokerStars PA, averaging close to 40 concurrent cash game seats versus PokerStars PA’s 250 seats.

WSOP’s Expertise and Experience, Will Help Increase Competition in Pennsylvania

WSOP has been operating in both New Jersey and Nevada for nearly a decade. It shares its player pool between three US states and is the only network to take advantage of the existing interstate compact.

It is the leading online poker network in New Jersey and the only poker room active in Nevada. Its player pool also connects with Delaware, where 888 runs online poker on behalf of the three racinos in the state, the only licensed operators.

WSOP.com is known to offer generous promotions on both its New Jersey and Nevada sites and is expected to do the same in Pennsylvania. Also, the fact, that it will be loaded with the newest and modern Poker 8 software, WSOP PA will give PokerStars PA a good run in the market.