The Keystone Classic and Progressive KO Series are just part of the build the 2021 World Series.

Barely three weeks after launching, WSOP Pennsylvania has announced not one, but two online poker series as it ramps up publicity ahead of the long-awaited World Series of Poker bracelets.

At the time of writing, details are thin on the ground, but we do know that the Keystone Classic series will take place between August 22 and August 31 and $500,000 has been earmarked for prize money.

Running alongside this, the Progressive Knockout Tournament Series takes place from August 17 through 29, and culminates with a Championship Belt event.

The site has been live for PA online poker for less than a month —soft launching on July 12—so running a brace of series makes a big statement about the size of the the operator’s ambition.

But that is not all that WSOP PA has planned. In addition to these inaugural series, WSOP PA is running several other promos throughout the month of August, all leading up to the return of its peerless live festival.

WSOP PA: The world’s most recognizable poker brand is now fully legal and regulated for online poker in Pennsylvania!
Claim your bonus package »

Huge Raft of Promos Throughout the Month

Within days of going live—and while the site was still in its soft-launch phase— WSOP PA announced a Depositor’s Freeroll with $50,000 guaranteed, plus three $10,000 Main Event tickets for the impending World Series of Poker.

That tournament takes place on August 22 and all players who make a deposit between July 15 and August 15 will receive a ticket for the event.

From August 15 to 22, WSOP is running a DIY Bonus, allowing players to set their own volume targets, offering bonuses up to $2000 upon completion of the challenge. This promo is running in New Jersey and Nevada as well as Pennsylvania.

WSOP Pennsylvania is also spreading eight online bracelet events exclusively for PA players, between August 8 and 15—and Satellites to the WSOP Main Event are running every Sunday offering players a chance to win a ticket for just $215.

WSOP Gaining a Foothold in PA

It is of course very early days for WSOP in PA, but the PR machine is in full effect. And it appears to be working. Cash game traffic has been steady, and the site is already running BetMGM close for market share.

And although both rooms have a long way to go before they trouble PokerStars in the Keystone State, it will be interesting to see if WSOP’s summer promos can boost its baseline cash game numbers. 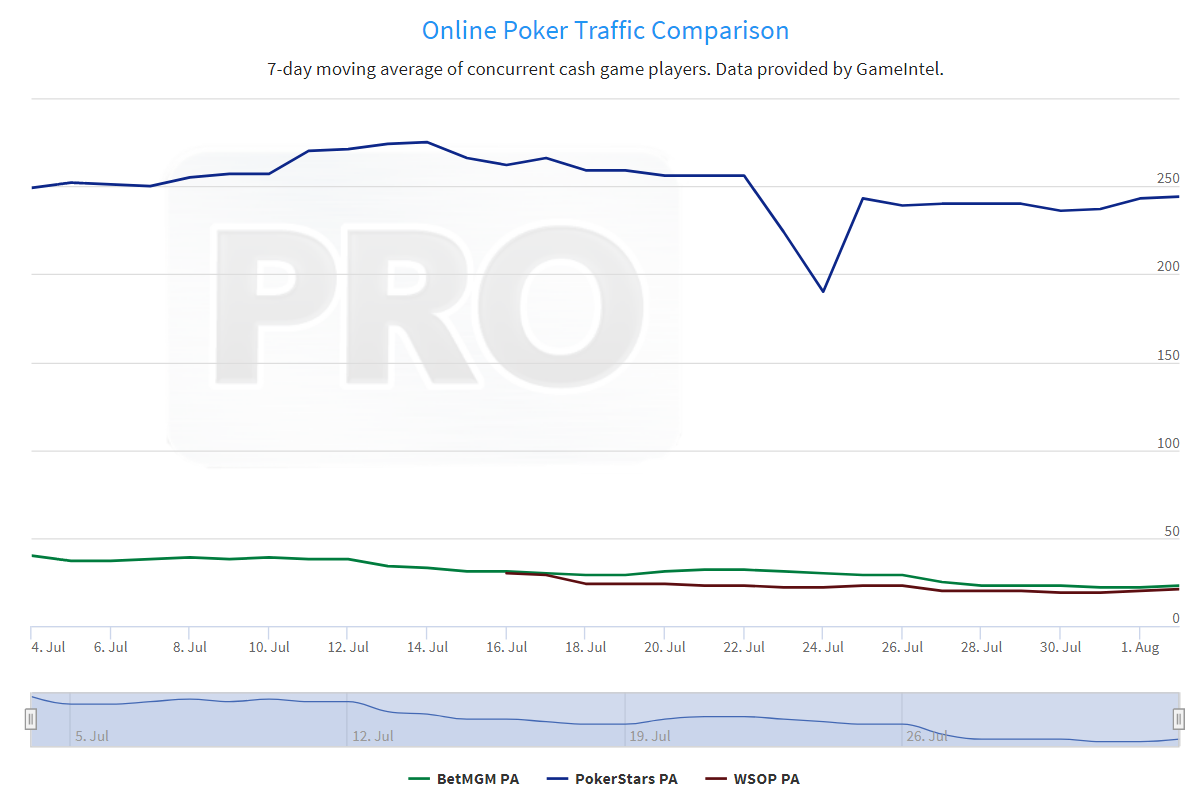 The launch of a site in PA online poker represents new territory for WSOP—in more ways than one. For a start, it is the operator’s first stand-alone poker room, that is, not part of a shared liquidity network. WSOP’s other sites—in New Jersey and Nevada—make part of the only inter-state player pool in the US, and it will surely wish to add PA to that conglomerate as soon as possible.

The Department of Justice’s recent decision not to appeal January’s Wire Act ruling has left the door open for shared liquidity throughout the US, and Pennsylvania will be one of the most important jurisdictions in that development.

With a population of 13 million, it is the largest state to have regulated online poker thus far, and as such could double the size of the WSOP network. And with the launch of WSOP Michigan seemingly imminent, the operator might soon be running the largest poker network in the whole of the US, the so-called WSOP USA.

Whatever happens next, 2021 is sure to go down as a monumental year in the history of WSOP.com.

The Keystone Classic series runs from August 22 to August 31. The Progressive Knockout Tournament Series takes place between August 17 and August 29. Watch this space for further details, as they become available.

The World Series of Poker (WSOP) 2021 was already shaping up to be the biggest ever, but it just got bigger with the…

Poker revenue in Pennsylvania was north of the $2.5 million for the fourth time this year, reaching nearly $2.6 million…

The Pennsylvania poker market has recently expanded from a single operator to a total of three now, with the recent…