After performing strongly all year, the trio of sites under Borgata’s license claim the biggest market share for the first time since 2016.

New Jersey online poker has a new leader. The sites operating under the Borgata license—BetMGM Poker, Borgata Poker, and partypoker—took over that mantle in September, generating more revenue than either Caesars (WSOP/888), or Resorts (PokerStars).

According to the New Jersey Division of Gaming Enforcement (DGE), The BetMGM triumvirate pulled in over $1 million during the month, allowing them to edge past the competition, the operator’s first seven-figure return this year.

It is an impressive turn-around. There has been a three-way rivalry in NJ since 2016, and in those five years, this is the first time that the Borgata group has topped the pile. Indeed, for much of that period, it has consistently placed third behind Caesars and Resorts.

Borgata NJ: Offering legal and fully regulated games in New Jersey since 2013!
GET YOUR FREE PLAY BONUS
Sign up to Borgata Poker NJ »

The three sites—part of the USA-wide partypoker US network—saw revenue increase 28% compared to August. Admirable enough in itself, but perhaps even more remarkably, that figure is 31% up on September 2020, an uptick that very few operators can currently match.

September’s success was no doubt aided by the WPT Borgata Poker Open Main Event. The prestigious tournament fell just shy of its $1 million guarantee but seems to have kept enough players on the network over the course of its three-day duration, to more than make up for the shortfall.

An interesting quirk in the data suggests that BetMGM and its partner rooms in NJ are far from dominating cash game traffic in the state. Of course, Caesars shares liquidity across NJ, Delaware, and Nevada, so it’s impossible to know exact numbers.

Nevertheless, the pattern is decidedly different from the stats on monthly revenue, with WSOP/888poker having a clear and considerable lead over Borgata and Resorts when it comes to cash games. The clear inference to make, is that most of Borgata’s success has come from tournaments. 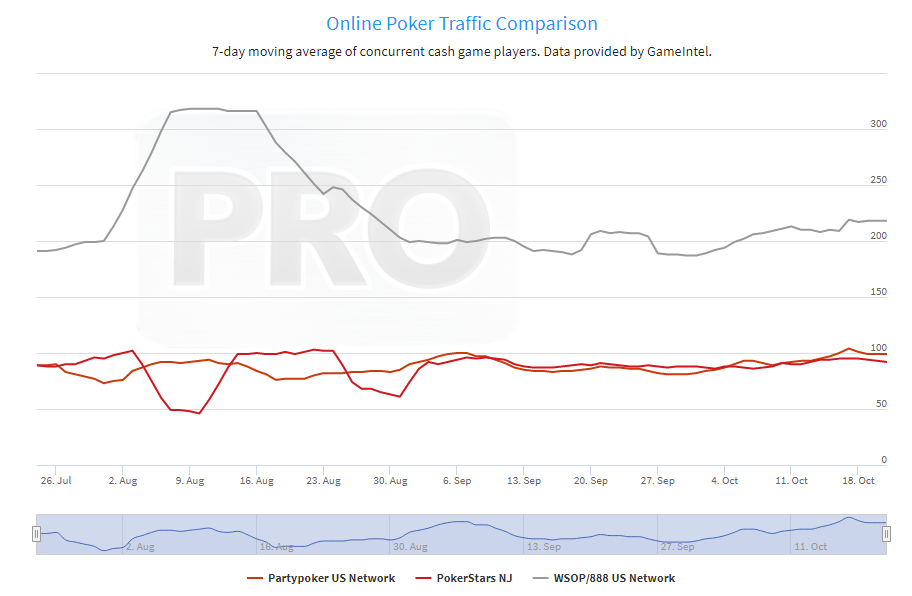 This makes sense. If BetMGM NJ and its sister sites are raising their profile by hosting $1 million tournaments, it stands to reason that this will attract more MTT players than cash game grinders. And who can argue with that strategy? It certainly appears to be working.

Only a year ago, Borgata was lagging well behind Caesars and Resorts, and while its income has not increased particularly in the interim period, it has largely maintained the boost received during the early days of coronavirus, whereas the competition has seen its revenue drop dramatically from the somewhat artificial high point achieved roughly 1 months ago.

As recently as July, Caesars NJ sites—WSOP and 888—were generating huge numbers, pulling in $1.7 million in that month alone, in large part due to the WSOP Online Bracelet Series.

A drop-off from such stratospheric heights was surely inevitable, but the extent of the downswing must have come as quite a shock: WSOP and 888 only generating $804,887 in September, close to a million down on July’s zenith.

To add insult to injury, this figure pushed Caesars into second place in the Garden State, the first time it has relinquished the top spot in 16 months. However, with WSOP sharing liquidity between New Jersey and Nevada, Caesars will be confident that the influx of players visiting for the World Series will help boost online income.

It is harder to see such a silver lining for PokerStars. The online giant has been bringing up the rear in New Jersey for nearly 12 months and doesn’t look like turning that around any time soon. September yielded just $665,808 for the operator, a sum akin to pre-pandemic figures and 13% down on the same time last year.

It is an unusual situation for PokerStars; galling, no doubt, but perhaps more than anything just plain baffling. Its two other US operations, in Pennsylvania and Michigan, are seemingly untouchable, with Stars continuing to dominate those markets despite several high-profile rival launches in recent months.

Yet the Red Spade’s endeavors in New Jersey, for the time being at least, remain stymied—and it is not immediately clear why.

March Poker Mania is coming to BetMGM Poker USA this month giving players an amazing chance to compete against the pros.

PokerStars US Outage: Cash Games, Spin and Gos are Back in Michigan, Pennsylvania After Unprecedented Downtime

PokerStars NJ finally appears to be making some headway in the Garden State. December saw the operator record its best…

Overall, the New Jersey online poker market dropped 8.4% last month, as compared to November of 2020, coming in at…

Prominent US online poker room BetMGM Poker, which has made a name for itself by packing the calendar with a string of…