A hypothetical PokerStars USA network, combining the player pools on PokerStars MI, PokerStars PA and PokerStars NJ, would be among the largest online poker networks in the world, the latest data collected by pokerfuse reveals.

Based on data tracked by independent industry monitor GameIntel, provided exclusively under license to our big brother Poker Industry PRO, we can see that if PokerStars were permitted to combine the shared liquidity of its three existing online poker networks, it would boast more than 1000 average concurrent cash game players.

This would put it among the largest networks globally. It would be similar in size to the global player pools of partypoker, 888 and iPoker. It would be approximately half the size of dominant European operator Winamax.

The only networks that would clearly tower over it would be PokerStars' own global online poker network, which boasts north of 8000 concurrent cash game players, and GGPoker, which sits at approximately 5500.

And of course, this does not take into account the network effect of combining these player pools. More games running around the clock, more varied games, bigger tournaments and SNGs firing off quicker would make for a more attractive poker offer. This would likely have a compounding effect, and a PokerStars USA network could move into the top five global online poker networks easily.

How Likely is a PokerStars USA Network?

The idea that PokerStars might be able to combine its three disparate online poker rooms in the United States into a single network is not far-fetched at all. It could certainly happen in 2021.

We already have one cross-state network—the WSOP/888 Network, which shares liquidity between Nevada, New Jersey and Delaware. While it is not yet possible to do the same to Michigan and Pennsylvania, this could change in the near future.

One of the biggest stumbling blocks has been a recent interpretation on an old Wire Act law which prevented bets on contests made across state lines. However, the courts in the United States have made it quite clear that this applies to sports contests exclusively. While the DOJ could appeal this to the US Supreme Court, there is no guarantee it will do so, nor whether the Court would agree to even hear the case.

It is hoped that this is the final nail in the coffin by anti-online poker lobbyists to try and prevent the expansion of safe, legal and regulated online poker in the United States.

In light of this recent ruling, operators are preparing for more market launches. 888 and WSOP anticipate expanding their network, first in PA, later in Michigan.

The Partypoker US Network is also expected to expand soon into PA and MI, with BetMGM possibly leading the charge. This is first expected to be closed liquidity, just like PokerStars, but its entrance is a clear sign that operators are hopeful more cross-border liquidity sharing is on the cards.

PokerStars is one of the best positioned to take advantage of this when it happens. It has operated the only online poker room in Pennsylvania, PokerStars PA, for over a year, which currently boasts over 400 concurrent cash game seats.

Then there is PokerStars Michigan, which launched just a couple of weeks ago. It immediately rocketed to the top of the charts for regulated US online poker. Traffic continues to climb, with the latest figures putting it on more than 500 average seats.

Finally, there is the long-established PokerStars NJ. There, it faces more competition, with both WSOP/888 and Partypoker/BetMGM/Borgata all running their own online poker rooms. Still, as the sole independent operator it manages around 100 to 150 concurrent cash game seats.

Therefore, all combined we can expect out of the gate the combined liquidity to be north of 1000 concurrent seats, and it can be expected to climb immediately with the network effect and marketing push. 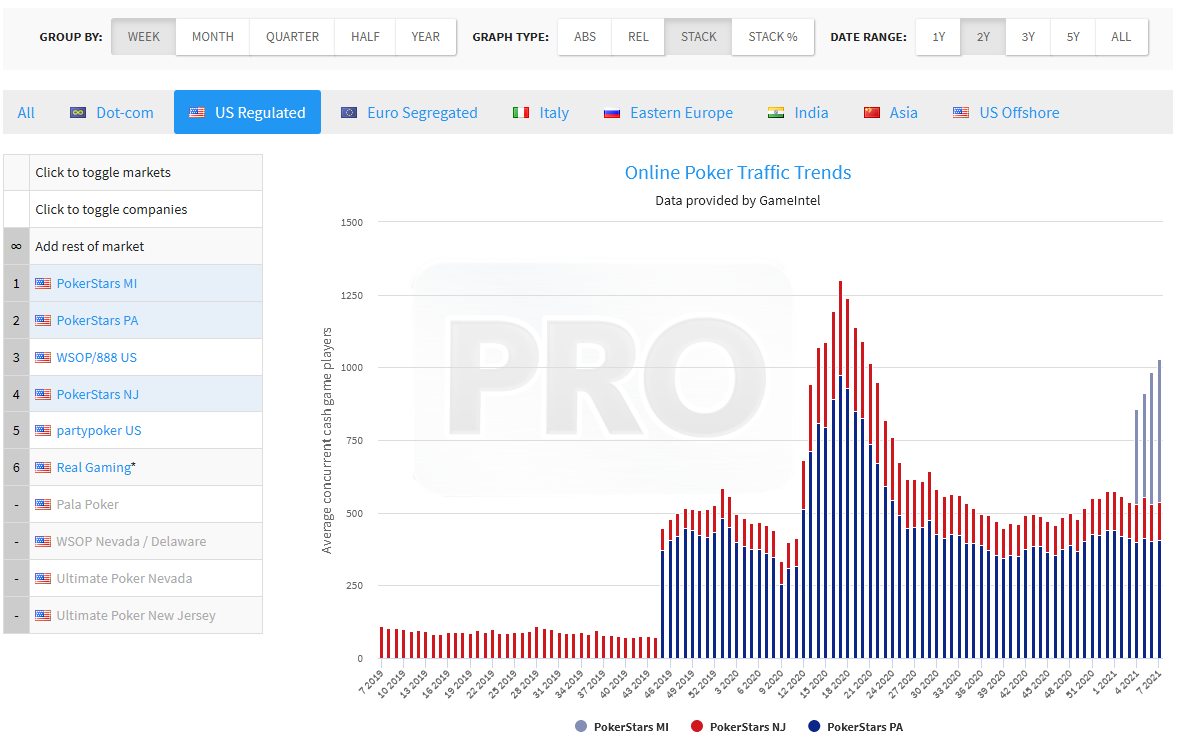 What To Expect from Tournaments and Cash Games on PokerStars USA

There, the network has around 1300 concurrent cash game players, on average, approximately what we would expect a three-site PokerStars USA network would be. This gives us a pretty good idea what kind of promotions, tournaments, cash games and big MTT series we can expect.

In terms of Sunday tournaments, the operator’s flagship is the Special, which guarantees €100,000 (approximately $120,000), attracting over 1000 entries every week. This is six times larger than what is available in Michigan.

Other big tournaments include a weekly PKO with a €20 buy-in and a €30,000 guarantee—and it often sails past this. Last Sunday it attracted almost 3000 players to generate a prize pool in excess of €50,000.

This is every reason to think that a PokerStars USA network would have a weekly $100,000 to $150,000 tournament and a similar spread of big guarantees throughout the week.

When it comes to huge tournament series, again we can expect the offer to completely transform. PokerStars Europe runs massive series all year round—this coming Sunday, for example, a Carnaval Series with €10 million guarantee is about to kick-off. Just prior to that, it spread a monster €15 million Winter Series. Its last Euro SCOOP was €12 million.

To compare, the biggest in the US regulated markets has been PokerStars’ last PACOOP, which guaranteed $1.5 million. The inaugural MICOOP on PokerStars MI, starting this Sunday, guarantees $1 million.

So, if and when a PokerStars USA network launches, we can expect tournament series at least ten times larger than what is on offer right now.

Promotions would be similar. For example, PokerStars is running its new Tetris leader board promotion on PokerStars.com and in Europe. The European version is giving away €23,000 a day, totaling more than €1 million across the six-week promotion. It is fair to say that there is basically nothing like this in the smaller markets.

So, with all that said, PokerStars USA will have promotions, tournaments, and online festivals never seen before in the US regulated markets. And it will no doubt face fierce competition from the likes of 888, WSOP, partypoker, BetMGM and others.

It will be a time like no other for US regulated online poker—a boom time for players and for operators. All we need is regulators to join the MSIGA shared liquidity pact—and it’s a go.

PokerStars in the USA has been on the mission to revamp their welcome offer across the board for a little while now….

PokerStars is the largest and probably the best-known online poker operator on the global scale. Since 2014, the site…

PokerStars USA, one of the leading licensed online poker operators in regulated US markets, has improved the odds of…