2021 saw PokerStars face some serious competition for the first time in over a decade, but the iGaming giant rose to the challenge to retain its top spot in the global online poker world.

For more than a decade, there was only one name at the top of the list of premier global online poker operators, and that name was PokerStars. Prior to 2021 — its first full year under new owner Flutter — the Red Spade sat atop the pile and faced very little competition for that position as king of the hill.

While PokerStars held on to the #1 spot through most of 2021, for the first time the operator faced serious competition from rival GGPoker. In part, the narrowing of the gap came on the back of an unexpected partnership between GGPoker and WSOP in 2020, which the upstart operator was then able to parlay into another solid year in 2021.

However, part of the narrowing was a result of lost market share for the venerable giant. 2021 marked a turn-around for PokerStars — the year it came back into the fold after a few years in the wilderness — as far as customer and brand loyalty was concerned, as Flutter made good on its promise to increase generosity for rewards and investment.

PokerStars has always been known for the biggest online poker games, and 2021 saw no change in that department, with massive games and series across the platform throughout the year. Where the Red Spade saw its biggest changes in 2021 however was in the areas of customer experience and rewards.

Battle for the Top

The big storyline that emerged from 2021 for PokerStars was the emergence of a real competitor for the first time in 15 years. PokerStars was unchallenged at the top of the online poker pile for many years, but after a 2020 when GGPoker essentially came out of nowhere to rocket into the top-tier operators, 2021 saw much closer competition between the top operators than the market was used to.

While there were lots of places where the two behemoths clashed in 2021, the battle for the top operator is most easily seen in cash game traffic.

From the graph, it is easy to see that 2021 was a turnaround year for PokerStars. While the online poker operator was a clear leader in the space for many years, from 2014 it showed a marked decrease in cash traffic. While none of that really translated to spikes for its competitors, the slow trickle of cash traffic loss chopped the giant down to the size of at least one of its competitors.

In large part, the long-term loss of market share was a result of a change of direction for PokerStars regarding rewards. Under the direction of new owner Flutter, the operator dropped the coveted SuperNova Elite rewards system, replacing it with a more opaque and randomized scheme that was poorly received by many high-volume players.

In 2021, after the purchase of The Stars Group, PokerStars parent company, in 2020, new owners Flutter moved to address customer and brand loyalty, in part with a revamp of the rewards system.

After trialing the new rewards system starting in July, PokerStars rolled out the new system in full on the global client in October. While other factors are no doubt in play, the trial and rollout of the new rewards coincides almost directly with Stars’ cash traffic bouncing back after a near 15-year low around the middle of 2021.

That low point of fewer than 5,000 concurrent users meant it was in a heated battle with rival GGPoker for the most cash traffic. The two operators traded the lead through the latter half of 2021, but overall, the Red Spade held a small lead through most of the year.

The Biggest Poker Games on the Virtual Felt

PokerStars has long held the biggest online poker games on the virtual felt and, while the operator has seen its first competition in years recently, the outlook for 2022 is bright after a strong performance in big games and series through 2021.

Not only was the Sunday Million 15th Anniversary a massive game with nearly 70,000 runners, but it also wrote one of the best storylines of the year. After some months of controversy on Twitter, Canadian Twitch poker grinder Vanessa “Niffler” Kade won it all for a grand prize of more than $1.5 million.

The win came after a bit of controversy on Twitter when Kade challenged the GGPoker ambassadorship of Dan Bilzerian and the social-media star shot back with a response many found offensive and dismissive. While her win in the 15th Anniversary Sunday Million game was not directly related to the controversy, the win went a long way toward silencing her critics.

Along with the epic Sunday Million 15th anniversary, PokerStars’ marquee series both went very well in 2021. The Spring Championship of Online Poker (SCOOP) started with $100 million in guarantees, and blew past that by the end, posting nearly $140 million in total prizes.

The operator scored another big series success later in the year with the sister series to SCOOP, the World Championship of Online Poker (WCOOP). Once again, the series started with a guarantee of $100 million, and comfortably beat that promise. In the end, WCOOP generated around $122 million in prizes, more than 20% better than promised. 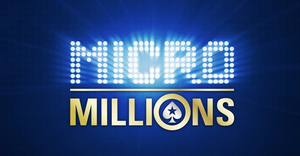 Beyond the marquee games, PokerStars still had a solid overall year to get 2022 off to a strong start. In July, it ran the second and biggest edition of its micro-stakes series MicroMillions in 2021, a $4.7 million guaranteed series that was the third-biggest MicroMillions of all time.

Big Moves Around the World

Beyond the direct experience on the felt, PokerStars made some moves on the poker industry side as well, expanding its reach — both globally and in the emerging regulated US market. In the US, the operator continued its stronghold on the Pennsylvania online poker market, where it is partnered with Mount Airy, even after it got competition from BetMGM PA and WSOP PA in 2021.

PokerStars also hit the ground running in Michigan. It was the first poker operator to go live in the new MI online poker marketplace in early 2021 and it held a dominating lead throughout the year, going into 2022 with more than twice the cash traffic of its only poker competitor.

If there is a cloud on the 2022 horizon for PokerStars in the US, it is in New Jersey. The former market leader has been languishing in third place for most of 2021 and will be looking to improve on that in the coming year.

Globally, PokerStars moved to open some new markets and modify some others while it looked forward to a widespread return to live poker. In expansion news, Swiss players were back on the Red Spade for the first time in two years in 2021 as PokerStars became the second operator in the regulated Swiss market.

In October, the operator clarified its position in Russia by closing access to the international client for Russian players. Starting in November of 2021, Russian players were required to use the PokerStars Sochi client. The main knock-down effect of the change appeared to be loss of access to the casino and sportsbook side of the PokerStars online experience for Russian poker players.

Overall, PokerStars is well-positioned going into 2022. It still sits at the top of the online poker world, though it faces more competition in 2022 than it has in years. If 2021 is any indication, however, the operator is looking at that as motivation and a challenge to retain its unquestioned top spot.

2021 was a clear turnaround year for PokerStars, after several years of dwindling traffic and damaged brand loyalty. It bounced back in cash game traffic to retain the lead for most of the year and continued to hold some of the biggest online poker games on the planet. Added to moves like better rewards and improved client experience overall, it shows the operator is serious about holding the lead.

It remains to be seen what 2022 will hold for PokerStars, but the global poker giant rolls into 2022 on a high after a series of successes in 2021.

It’s been a while since the live poker world was as active as it has been in 2022, following two full years of the…

Only One Week Remains Until PokerStars SCOOP 2022

The massive spring tournament season is nearly upon us, and tournament poker players of all levels have a lot to look…