While the web client still remains, the apps are gone and the brand all but sunset—pokerfuse takes a look back at the trend-setting yet deeply-troubled online poker room.

Two weeks ago, pokerfuse exclusively reported that the Full Tilt client would be sunset. Last Thursday, the desktop and mobile apps were taken offline across markets globally.

This marks the end to almost all the remaining assets of Full Tilt poker: From its cartoonish avatars and classic table themes to the iconic logo the ear-worm sound effects, what was once one of the most exciting online poker operators in the industry is all but gone.

Putting a single date on its ultimate demise is open to debate. This latest development is just one in a string made by owners PokerStars in winding down the brand. It has been almost five years since the iconic software was sunset. Since then, Full Tilt has been operating as a skin on PokerStars’ software, sharing the same player pool and offering only cosmetic differences.

Even today, the brand has not completely disappeared. The Full Tilt poker website and web product—PokerStars’ new browser-based poker client—remains online for now. The download link on the website has been replaced with that of PokerStars, but players can continue to use the instant play option by clicking on “Play” on the homepage.

However, this web product is entirely different from the iconic Full Tilt software. There are no cartoonish avatars, no Vegas skyline table theme nor any of its special sound effects. Instead, a simple browser-based poker client, akin to the operator’s old generation mobile app, but with limited game options and features, is all that remains.

This instant play option notwithstanding, the shutting of Full Tilt’s desktop and mobile apps mark the end of an era. Pokerfuse takes a look at the ups and downs of Full Tilt Poker over its 17-year history.

Full Tilt was launched in 2004 under the ownership of Tiltware LLC. It involved some of the big names in the industry at the time, including former WSOP Main Event winner Chris Ferguson.

Riding high on the first online poker boom caused by the Moneymaker effect, the site quickly became one of the largest online poker rooms in the world. It had the reputation of professional poker players, was the primary sponsor of a number of poker TV programs and boasted exceptional software out of the gate.

It also became synonymous with high-stakes poker featuring nosebleed legends like Tom Dwan, Phil Ivey, Viktor “Isildur1” Blom and Phil Galfond. It was home of rail heaven. Post-UIGEA, it became the number one competitor of PokerStars. 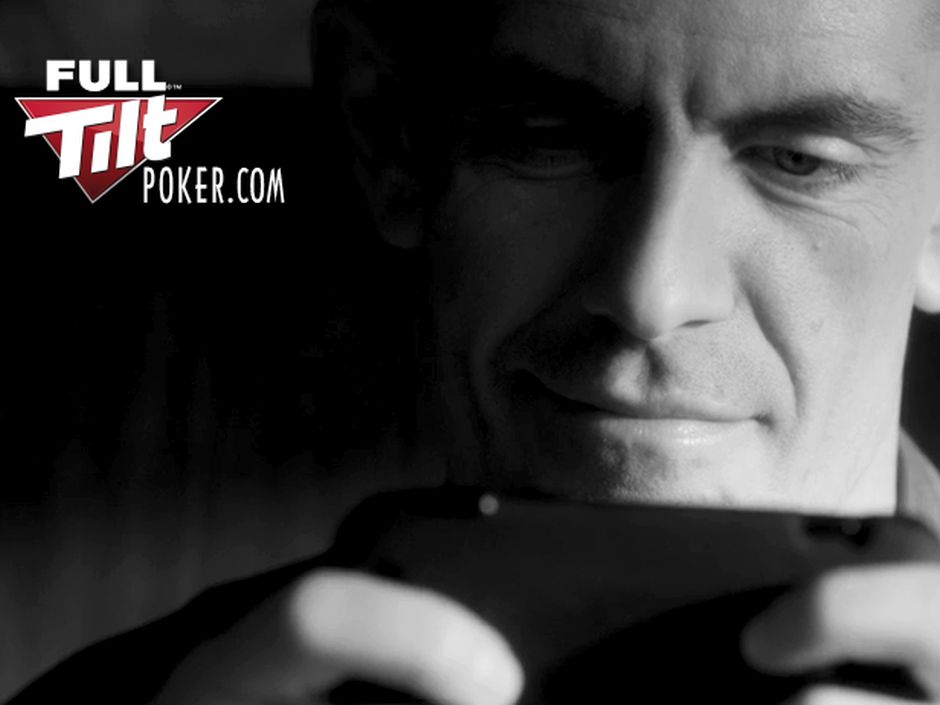 Master of Innovations and New Features

Full Tilt Poker in its prime revolutionized the online poker industry by bringing several unique features to its poker platform.

Most famously, it invented Rush Poker in 2010, a fast-fold poker variant that allows players to “quick fold” and jump instantly to the next hand.

It was an instant success, and other operators took note. PokerStars joined the instant-action bandwagon with its own fast-fold variant called Zoom Poker. 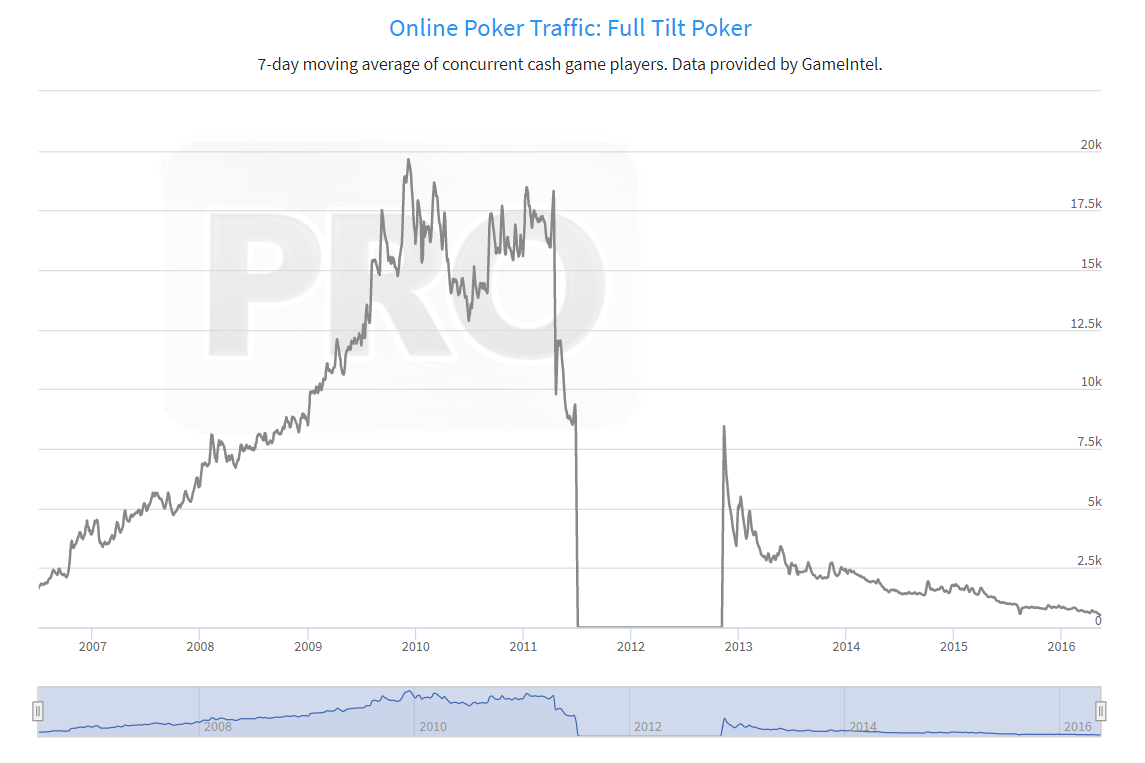 Today, the format has proved to be so popular that almost every online poker room spreads their own version. 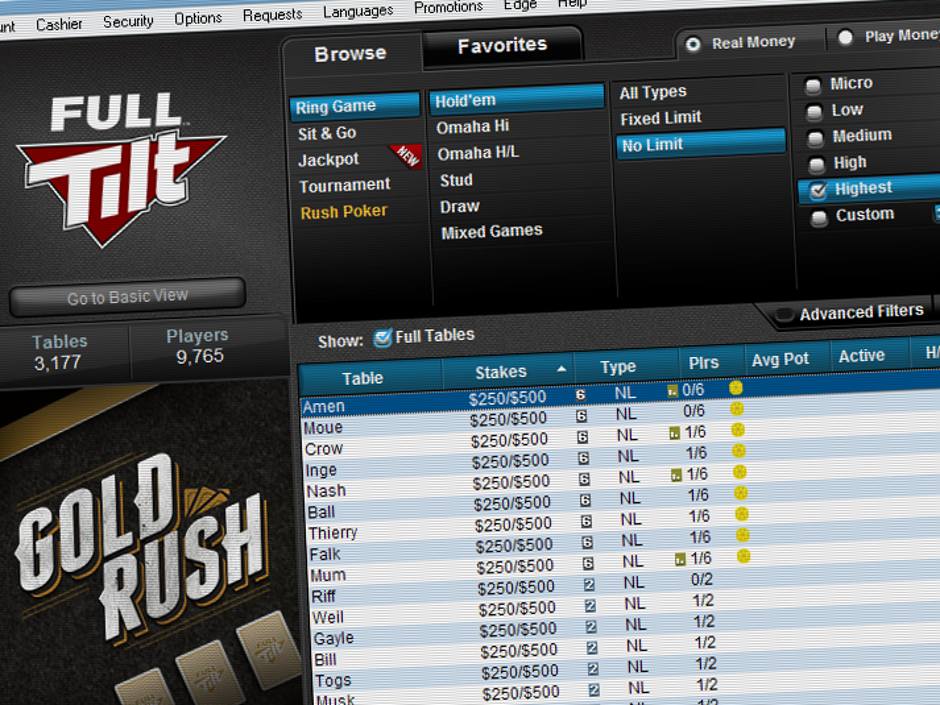 It is also one of the first online poker rooms to roll-out Run It Twice, automated deal-making at final tables, on-demand sit and go’s, 4-handed Adrenaline Rush, in which players’ options were limited to raising or folding, tournament waiting lists, and more.

Action formats such as Irish Poker and 6 Card Omaha, plus 5-Card Stud and 25-Game Mixed Game variants, are also all creations of Full Tilt Poker.

Full Tilt was certainly not immune to controversies and lawsuits. Its company and the founders faced multiple lawsuits alleging unfair and unlawful business practices. There were also accusations of poor financial decisions against the owners, leading to one of its board members quitting.

In June later that year, the site was forced to close and its license was suspended.

What the Department of Justice discovered on the books of Full Tilt was massive fraud against its own players. The operator did not have player funds in deposit, like it said it did. A civil complaint against executives alleged that player funds were stolen, and players were deceived, in what amounted to “global Ponzi scheme,” it was claimed.

PokerStars came to the rescue. Having already repaid its own US players in full within weeks of its shutdown, in April 2012, it reached a settlement with the US DOJ to purchase its long-time rival and its assets. As part of the settlement, it agreed to repay all the money owed to Full Tilt players.

Second Round of Full Tilt

Full Tilt relaunched in November 2012 to much fanfare, but early euphoria soon died down. It did continue to innovate with new games and formats, hosted its flagship FTOPS series and expanded into gaming beyond poker, but it struggled to maintain traffic like it did before Black Friday.

It then revamped its reward program to please casual players, a pivotal moment for the industry in its approach to player loyalty.

However, none of these moves worked. The site was migrated to the PokerStars platform in 2016. A Full Tilt representative told PRO site that the original software would not be put up for sale.

For the next five years, it quietly continued to operate as a skin of PokerStars, but with fewer game options. However, keeping Full Tilt in sync with constant upgrades to PokerStars’ client has forced the operator to shelve Full Tilt skin.

Its first shutdown process began in October last year, forcing the dot-EU players to switch to the PokerStars platform. On February 25, the Full Tilt skin was been closed entirely.

Today, it lives on in the web client, though how long that will last remains to be seen.

The last remaining assets of the Full Tilt software are set to be taken offline on February 25. On that date players…

Continuing its trend of developing new ways to keep its players engaged, GGPoker unveils yet another innovative product…

“No Strings Attached”: PokerStars Bails Out PKR, Refunds all Players

PokerStars is reimbursing all players who lost money following the closure of online poker room PKR, PRO can reveal.