The Delaware Lottery has released its official online gaming numbers for the month of May 2014 with figures pointing to a continued decline in online poker state-wide.

In May, combined online poker revenue in the state of Delaware generated from the three licensed racinos totaled $57,470 representing a drop of $16,608—or 22.42%—from April.

Delaware Park still leads its competitors with 62% of the online poker market share. However, that is 8 points less than April—as Dover Downs (32% share) and Harrington (6% share) have gained ground according to the Delaware Lottery figures. 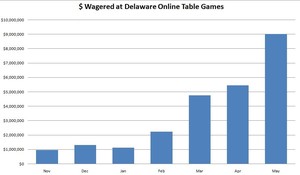 New sign-ups for the month shed 15.76% with 342 new online gaming accounts in the state during May—a number which has steadily declined since igaming began in Delaware in November 2013.

WSOP Online Bracelet Events in Pennsylvania: Everything You Need to Know

Organizers have added another eight bracelets to the schedule at the newest WSOP room, WSOP PA.

What would a USACOOP Series on PokerStars USA Network Look Like?

With the Wire Act coming to an end after no appeal was made by the DOJ in the due deadline, the hurdle for interstate…

Breaking: WSOP.com to Go Live in Pennsylvania on July 12, with Segregated Player Pool for Now

BetMGM intends to offer Spins lottery sit and gos in all the US markets it operates in, pokerfuse has learned.