Pokerfuse provides a sneak peek at the tentative tournament schedule of PokerStars PA.

While players patiently wait for online poker to go live in Pennsylvania, pokerfuse brings you another look behind the scenes, this time revealing the tournament offerings currently planned for PokerStars Pennsylvania.

A quick glance at a tentative weekly schedule deployed in the PokerStars PA, currently believed to still be in private testing but the odds on favorite to be the first legal and regulated online poker room to go live in the state, suggests that the operator will closely follow the branded tournaments seen in New Jersey but with some slight but significant differences.

Being the fifth-most populous state in the United States boasting a population of nearly 13 million—more than the combined population of Delaware, Nevada, and New Jersey—means it is fair to expect the guarantees for these MTTs to be set higher than than those in New Jersey, and based on our view of the PokerStars PA client, that certainly appears to be the case.

Not only are the guarantees bigger compared to New Jersey, but the buy-ins are also less expensive making these tournaments more valuable for the players on the latest PokerStars US site.

As another example, a $250 buy-in Sunday High Roller is also scheduled every Sunday at 19:00 ET with a guaranteed prize pool of $10,000. In New Jersey, a similar tournament carries a buy-in double the size with lower guarantee.

Sunday is typically the biggest day of the week for online poker tournaments, and currently it appears that there will be five Sunday majors offered by PokerStars in Pennsylvania just like in the New Jersey market.

Kicking off the action will be the $30 Sunday Warm-Up at 16:00 ET followed by the $10 buy-in Sunday Storm an hour later. Then the action escalates at 18:00 ET with the Sunday Special featuring the largest guaranteed prize pool. The $250 buy-in Sunday High Roller and the $50 Sunday Supersonic round out the action at 19:00 ET and 22:00 ET respectively. 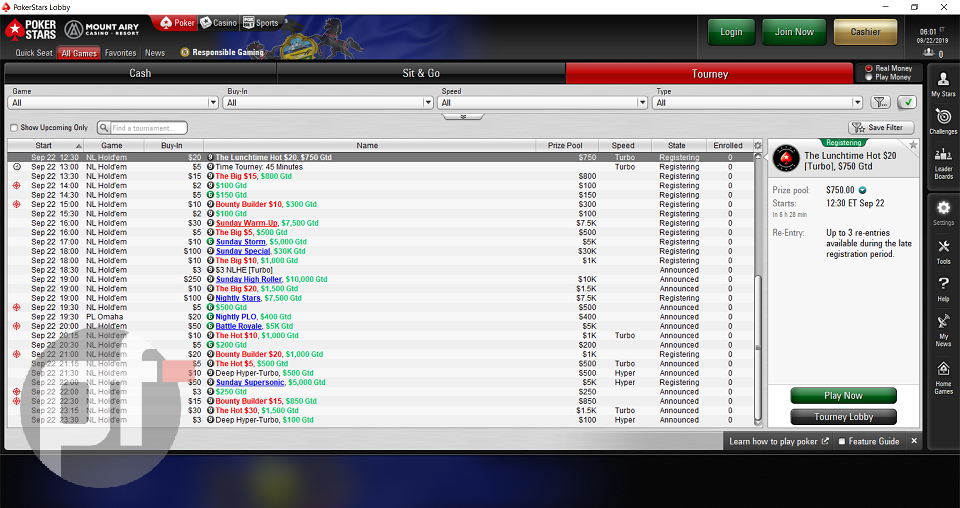 Players could expect to see a wide variety of tournaments with dozens of them scheduled each day and almost all of them promising guarantees ranging from $100 to $30,000.

There will be tournaments for all types of players with buy-ins starting from $2 ranging up to $250 with a majority of them allowing re-entries. The draft schedule also reveals that MTTs will come in various formats including the very popular Progressive Knockout (PKO) tournaments, time tournaments, turbos and hypers, a rebuy tournament and a couple of Pot Limit Omaha MTTs.

Like in other markets, there will also be daily Bigs, Hots, Bounty Builders, and even a Moonlight Express—a tournament that is offered in New Jersey and runs at midnight daily. All these tournaments are priced at the lower end of the range, between $5 and $20.

The Pennsylvania PokerStars client will also have daily major tournaments to choose from including the Super Tuesdays, Thursday Thrills, Wednesday 6-Max, Fast Fridays, Saturday Speedways, etc. The buy-ins for these majors are on the higher side ranging from $50 to $200.

Notably, no Zoom tournaments or other niche variants such as 8-Game, 2-7 Lowball or Stud are part of the draft schedule.

Online casinos are authorized to offer slots (including video poker) and table games such as roulette and blackjack, but online poker still remains on the sidelines.

However, the recent activity in PA observed by pokerfuse suggests that the launch could happen soon.

Keep watching this space for more information on PokerStars’ launch in Pennsylvania including additional details on its poker offering, its casino games and more.

Please note that the details provided consist of educated predictions based on information we have gleaned. None of the information obtained has been provided by PokerStars, and things may very well change prior to launch.