As part of a complete overhaul of its online poker experience, the new mobile app includes a new look and new features.

The new mobile app represents a complete overhaul of its online poker experience, with a myriad of new features, including portrait mode tables, a redesigned lobby and tables, new animations and graphics, the introduction of in-game social currency, and much more.

The company states that the new mobile product has been developed keeping player engagement in mind and to help grow poker further.

For now, players will only be able to experience the refurbished look at the SPINS games while other game formats will continue to use the old legacy design. The operator plans to deploy the new layout to other game types at the beginning of next year.

Among the most notable features of the new mobile app is that tables have been completely redesigned in portrait orientation, making it much easier for players to play one-handed.

Gone are the landscape mode tables requiring players to turn the phone on its side and having both hands to control the mobile device, instead, a simple straight-forward, visually appealing portrait mode with buttons, bet sliders and other controls are positioned to facilitate casual portrait play.

“This app brings poker on your phone into the modern age, said partypoker ambassador Jaime Staples. “The experience of just being able to play with one finger is something I have never had the chance to experience before. It’s so simple and intuitive! It’s by far the best poker app I have played on my phone. So simple to use and fun!”

What makes it even more appealing is that the portrait mode also supports multi-tabling play to a maximum of four tables—all visible in a split-screen view. Not only can players view all four tables at once, but players can also perform actions from this zoomed-out view. 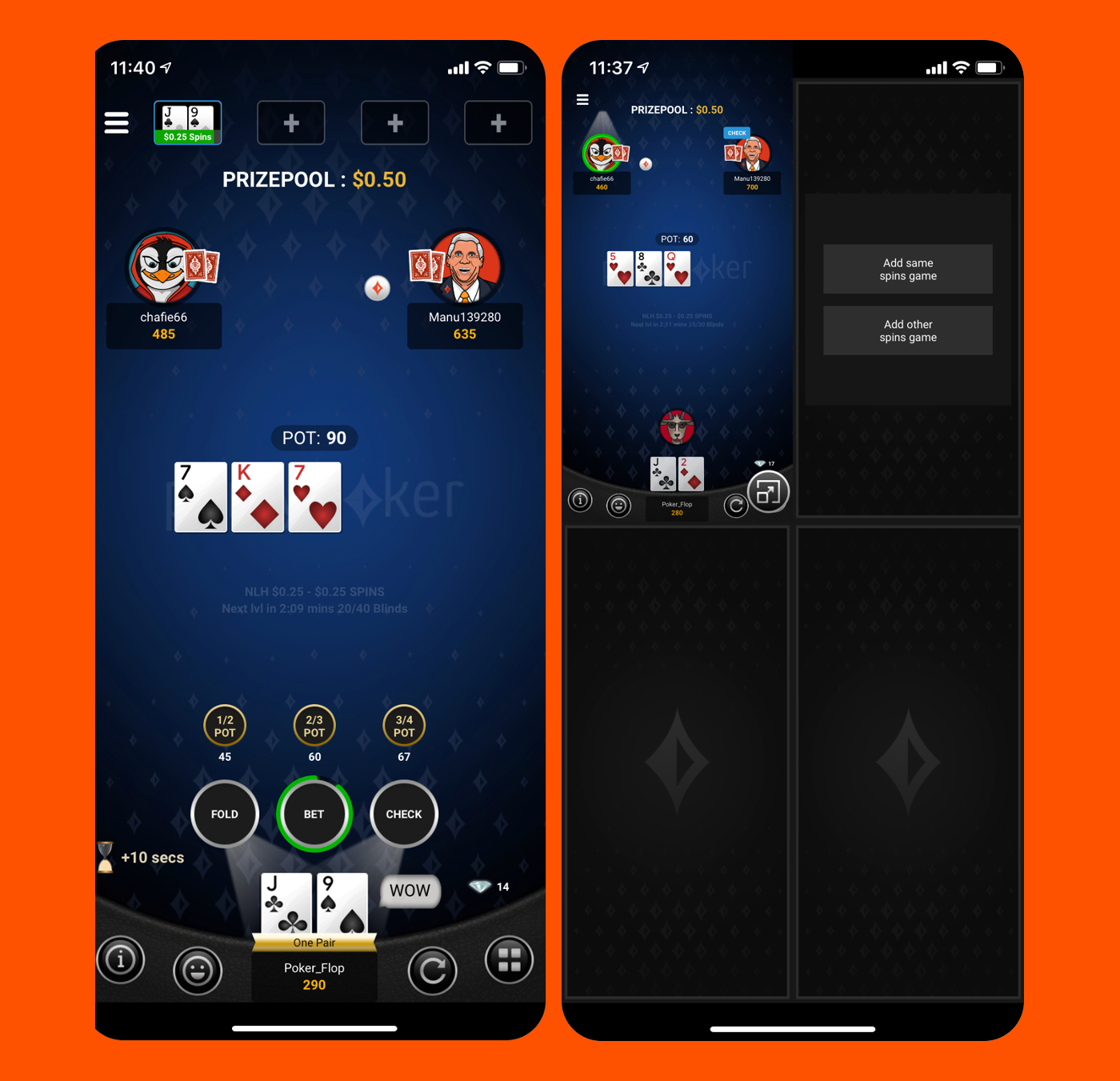 Adding new tables is also easier as all players have to do is tap on the “plus” sign visible at the top.

The hand replayer has also been redesigned to align with the new portrait layout. In fact, all game types including the ones that are played nine-handed in landscape mode will support the new replayer portrait look from day 1. 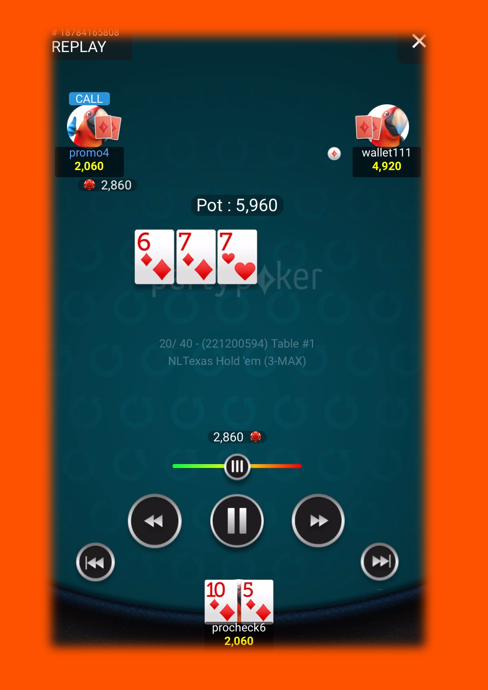 Overall, the tables appear much more modernized, easier to use and the software feels intuitive and responsive.

Not only have the tables been reworked, but so has the main lobby. Players have the option to either switch to a tiled or carousel view of the different buy-ins available. A filter option has also been added that allows the player to see only the games they would like to see. Plus, players can register up to 4 games of the same buy-in simultaneously. 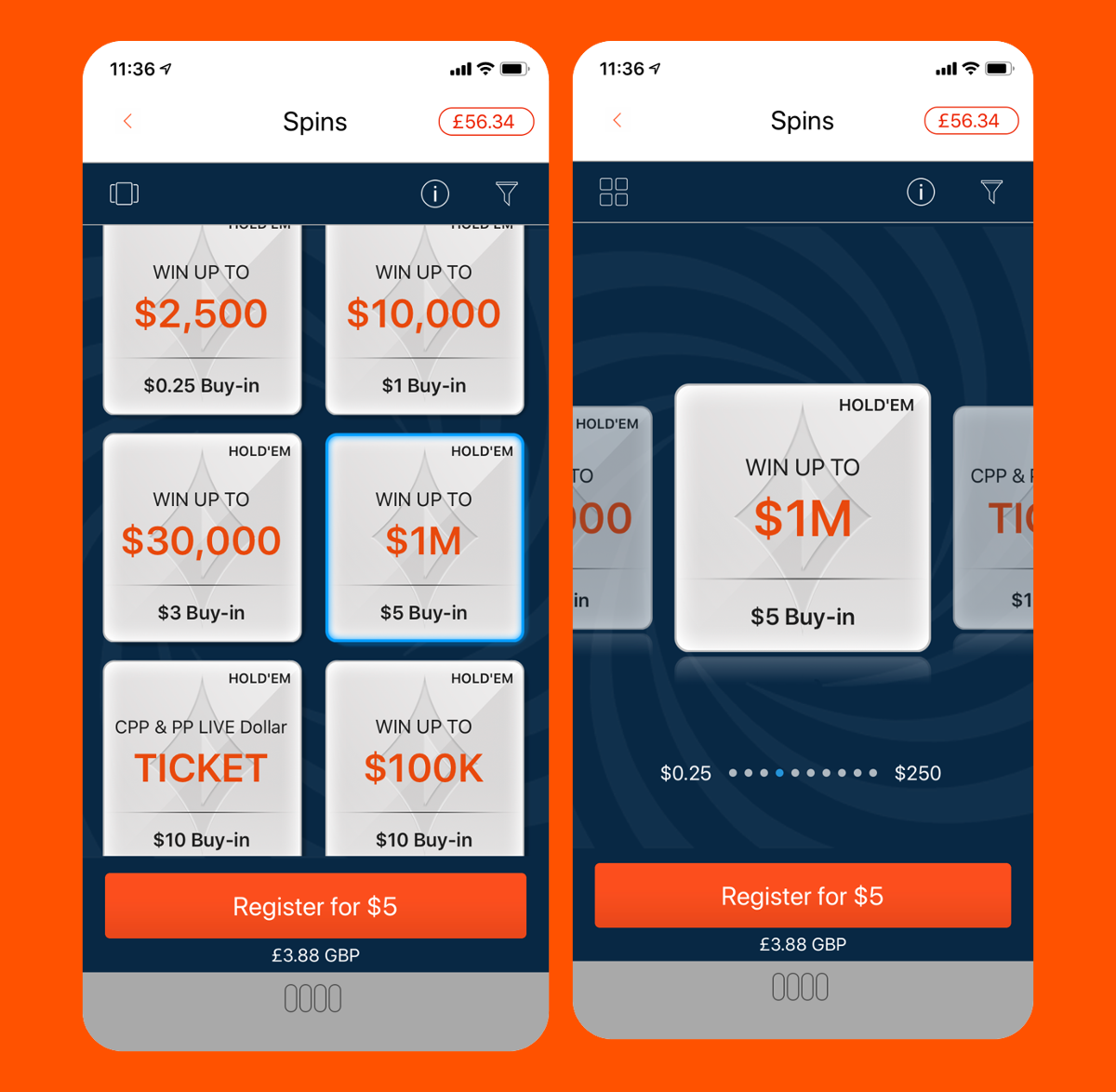 Animations displaying the SPINS multiplier have been recreated as well as the table felt color to denote the size of the prize pool.

The rollout of the new update will happen gradually starting with SPINS games. Other game formats will still remain in the client, but, they won’t have the refurbished look or portrait layout for now.

The operator expects to roll out the new update to other game formats in early 2020. The full transition to the new design will start with FastForward, followed by cash games and tournaments.

“The new SPINS product shows our commitment to improving the mobile experience for our customers,” said Head of Product at partypoker, Ross McQuater.

“The new lobby and portrait table for SPINS with new and exciting features, such as the ability to throw things at opponents and view rabbit cards, aims to provide our customers with a more fun and engaging playing experience,” McQuater continued. “This is just one of many updates that will be delivered in the coming months as we overhaul our mobile proposition.”

This cautious approach makes sense for the company as they are trying to avoid encountering endless bugs that may occur and hamper the overall playing experience for mobile players.

To avoid the situation of constantly switching between portrait layout (available only in SPINS format) and landscape mode (all other legacy games), players will only be able to play one game type at a time. This means that players can not only play any other game format once a SPINS table has been loaded.

The new app is available for download to both Android and iOS operating systems, supporting both phones and tablets.

partypoker will launch online poker, casino gaming, and sports betting in Ontario on Tuesday, April 12 — and the…

One Year In: How PokerStars MI Performed in its First 12 Months

As the first month of 2022 came to an end, it marked the one-year anniversary of PokerStars MI. The site launched on…

Overall, the New Jersey online poker market dropped 8.4% last month, as compared to November of 2020, coming in at…

After the three-month trial period, PokerStars is rolling out its new and improved rewards system for players across…